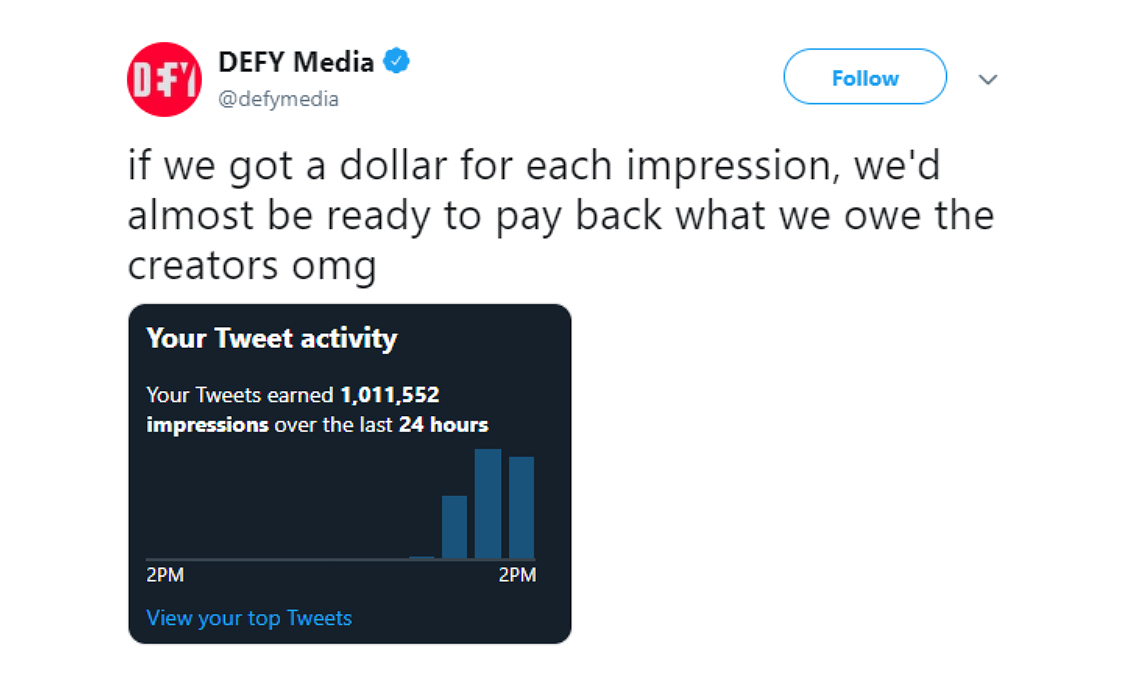 Someone has hacked Defy Media’s Twitter account, and they’ve made it perfectly clear that they are not a fan of Defy.

Back when the company abruptly shuttered in November, it left roughly 50 creators (as well as hundreds of employees) in limbo, and an estimated $1.7 million of those creators’ AdSense earnings is still caught up in Defy’s bankruptcy and liquidation proceedings. As a result, there are plenty of folks out there who aren’t happy with Defy, and @umn, the person who appears to be behind the hack, is one of them.

Sometime this morning, Defy’s Twitter profile was…let’s say altered. The company’s location is now listed as “in the toilet — where we belong.” Its bio now reads, “Hello Defy Media here. Due to issues with our CEO’s electric wheelchair, we were forced to run off with some YouTube money. Lots of love, @umn.”

After they got inot the account, which had been dormant since Defy’s shutdown, @umn announced their presence with this tweet:

The missive (and its artfully chosen GIF) was followed by a couple dozen more — some of them replies to top YouTubers like Jimmy ‘MrBeast’ Donaldson, others notes to creators affected by Defy’s business practices and shutdown, like Smosh‘s Anthony Padilla and Mari Takahashi.

Then, they decided to clear things up for folks who weren’t sure if a vestige of Defy was somehow playing an elaborate prank — or if someone had hacked the company’s account.

For those of you who didn’t get it… From the bottom of my heart, I stand with you and understand you – those who were stuck in DEFY’s contracts. Unfortunately, not much I can do about that. I wish you well. pic.twitter.com/s2Up4WbPFp

As for what they’re going to do with it (at least until Twitter inevitably boots them out), well, they have some ideas.

so.. do we turn this into a meme page or what