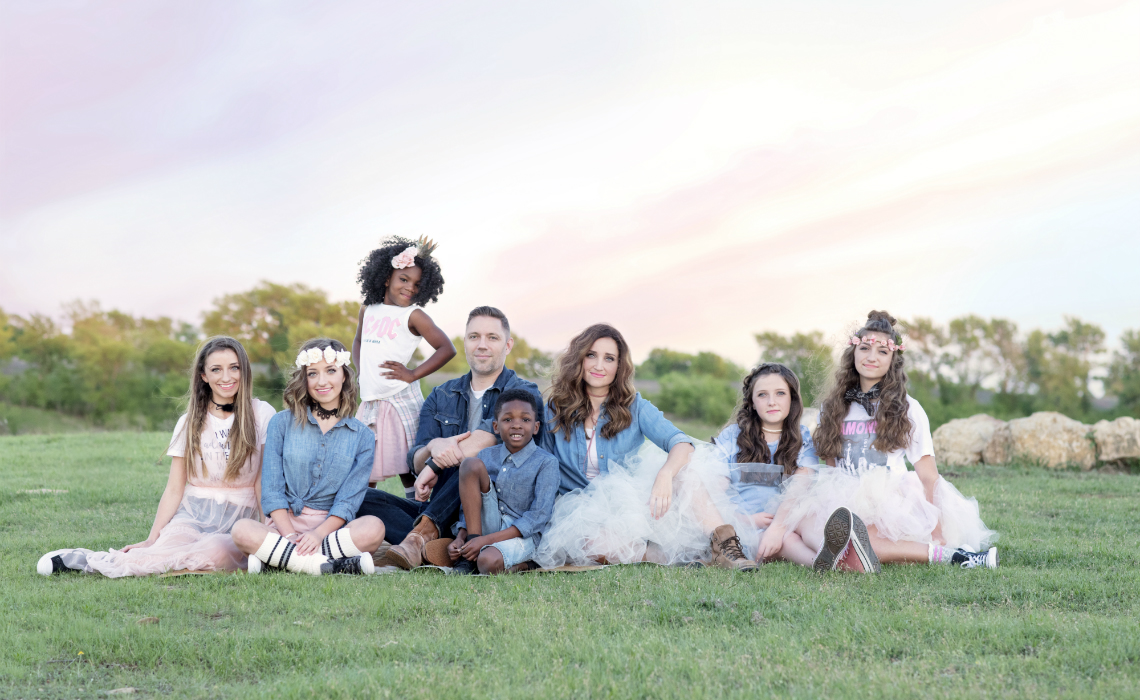 She wasn’t looking for an audience. She didn’t come in with a strategy, hoping to share her content with the world. Instead, she hoped the blog, called Cute Girls Hairstyles, would be a sort of family heirloom — a private record of the intricate, meticulous hairstyles she put together for her young twin daughters, Brooklyn and Bailey. McKnight hoped that one day, they could look back at the blog and learn how to do up their own children’s hair.

Today, Cute Girls Hairstyles is still a family heirloom. But not because it’s still waiting, buried in the depths of the internet, for Brooklyn and Bailey to one day find it. No, it’s an heirloom because in early 2009, McKnight’s husband Shaun proposed a solution to her problems illustrating a particularly tough hairstyle with photos and written instructions: Why didn’t they just film her process, and put it on this new video site called YouTube?

On YouTube, McKnight’s brand flourished into a full-scale, primarily video-based family business that now encompasses not only the original Cute Girls Hairstyles channel, but Brooklyn and Bailey’s shared vlog channel, and the lifestyle channel of their younger sister Kamri. (The original blog is still around as well, with daily lifestyle articles posted by a roster of 17 contributors.)

Collectively, the McKnights’ channels boast 13 million subscribers: 5.6 million for flagship Cute Girls Hairstyles, 5.6 million for 19-year-olds Brooklyn and Bailey, and 1.8 million for 14-year-old Kamri. Together, they garner between 25 and 40 million views per month, with the lion’s share (between 15 and 20) earned by Cute Girls Hairstyles. Content for all three channels is produced by Mindy, Shaun, and their team of seven employees, six of whom are full-time.

It’s not an overstatement to say YouTube changed McKnight’s life. She had to figure things out on the fly, in the very earliest days of social media influencers, how to handle her kids being a part of her YouTube business, and eventually launching channels of their own. It was a tough learning curve — tough enough for her to write a book guiding other parents through the process. The book, Viral Parenting: A Guide to Setting Boundaries, Building Trust, and Raising Responsible Kids in an Online World, released yesterday from Grand Central Publishing.

To celebrate the release, McKnight sat down with Tubefilter to talk about how Cute Girls Hairstyles found its YouTube audience, when she knew YouTube was becoming her career, and how her business is still going strong after 10 years on the platform.

Tubefilter: So first, tell us a little about your background. Where are you from, and what did you do before YouTube?

Mindy McKnight: I was raised in Sandy, Utah, and graduated with a BA in art history/humanities from Brigham Young University. I married my husband, Shaun McKnight, in 1998, and together we added six beautiful children to the family. Prior to YouTube, I was an active stay-at-home mom, volunteering in our church and community, who also served terms on the school and HOA board.

Tubefilter: You had the idea for Cute Girls Hairstyles long before you joined YouTube–back in 2001, right? Why did you decide to take your idea to then-fledgling YouTube? Did you ever think YouTube could become a full-time career for you?

MM: I started my cutegirlshairstyles.com blog in October 2008, mostly as a way for me to document photo instructions for my braided hairstyles for my girls when they become mothers. From there, it became easy to share the tips and tutorials with family members and friends, and it just took off.

A few months later, I was trying to take photos for a messy bun tutorial that just wasn’t working. My husband then suggested that we film the tutorial with his Flip camera and upload it to this website called YouTube. The blog was my primary focus — we had no idea there were people consuming content on YouTube, and that the platform would become a HUGE part of our lives over the next 10 years. I would never have guessed that YouTube would become not only a full-time career for me and my husband, but the foundation of entrepreneurship and career opportunities for our kids as well.

Tubefilter: You’ve worked with a number of huge brands–Walmart and Disney, to name two. How did those partnerships come about? Do you have any advice for YouTubers who are working with brands?

MM: Disney was our first long-term partnership, which began in March 2012, and has delivered over 120 million lifetime views across Disney properties. They reached out to us early on, before we had management or knew what we were doing, and really let us have creative control with our content.

Walmart was a more recent long-term partnership centered around back-to-school and Christmas. That deal came as a result of prior work we had done for the company, which resulted in a long-term deal negotiated by our manager and MCN.

Our two cents of advice to YouTubers working with brands is to KNOW YOUR VALUE and AVOID PROJECT SCOPE CREEP after the deal is signed.

Our first check outside of AdSense was a brand deal in September 2012 for $6,000. That was brought to us by a close friend, Ricky Ray Butler (current CEO of Branded Entertainment Network), for a brand integration with PMD Beauty.

MM: There is no such thing as digital privacy. Having said that, if you have kids online, you need to be a parent online. The book helps give tools and tips on how to have convos with your kids about their digital footprint and consumption, how to help them become creators instead of consumers, and how to balance both analog and digital moments to create the perfect blend of modern parenting.

Tubefilter: Your daughters Brooklyn, Bailey, and Kamri have also gone on to become successful YouTubers. Have you helped guide their YouTube journey? What’s it like having multiple YouTubers in the family?

MM: Brooklyn and Bailey are likely the first in the “next generation” of YouTubers to fully grow up on the platform and operate their own successful channels. Both are currently freshmen at Baylor University studying entrepreneurship, and their experience on YouTube has shaped a lot about how they view business and marketing.

We’ve tried very hard to teach them the value of a dollar and hard work, as well as opportunity costs, from the time they were toddlers. But Brooklyn and Bailey are brilliant, creative, and intelligent young women in their own right. It’s fun to watch them take over in a boardroom!

Adding our third daughter Kamri on YouTube three years ago was another fun experience, because she is so different from Brooklyn and Bailey in terms of style and talent.

MM: We had often heard that the difference between solvency and bankruptcy in the homes of American families was an extra $400 per month. So when we reached that point in August 2009, it really tipped the scale for us. That meant that if we wanted to splurge a little on a cute pair of jeans, or go eat at a little bit nicer restaurant, or take a better vacation… we finally could! Not that we did, of course. It was just a peace of mind. We used everything we earned in the first four years to adopt our two youngest children.

MM: We upload one video per week on each channel and always have. We have a rolling three-month production calendar, with three to four videos in the can at all times. Because the kids are still in school full-time, we plan filmings around classes, homework, and extracurricular activities. We use summer and spring breaks to bank 10 to 12 videos for those weeks when the kids have finals or just don’t feel like filming. We have seven full-time employees now, so film prep and production/editing isn’t as much of a burden on the family as it used to be. CuteGirlsHairstyles uploads every Monday at 2 p.m. CST, BrooklynAndBailey uploads on Wednesdays at 4 p.m. CST, and KamriNoel goes live on Thursdays at 4 p.m. CST. The only time we’ve ever missed an upload time was due to YouTube outages.

Tubefilter: When did you notice your YouTube audience really growing, and how did you continue to grow that audience? Did you ever make tweaks to your content strategy?

MM: We were driving quite a bit of mom traffic to YouTube from our hairstyle blog when we first started in the end of 2008. In fact, we had over 10,000 Facebook followers before we ever started on YouTube in March 2009. But the growth didn’t really take off until we won YouTube’s On The Rise contest in May 2011. As the winner, we were featured on the YouTube homepage for 24 hours, which helped us gain 24,227 new subscribers that month. That was a TON back then. That month was definitely our inflection point in terms of YouTube growth and success, and we thank YouTube for that.

Tubefilter: Can you let us know how many people are on your team? Do you have any employees? What about a manager or network?

MM: Outside of our family members, we have a director of operations/brand strategy, a producer/videographer, an editor, a production assistant, a social media coordinator, a graphic designer, and an intern. All of them are full-time except the intern, who is a senior in college.

Externally, we are represented by Amy Neben from Select Management.

MM: My most vital skill is my ability to adapt while still maintaining my authenticity and core values. The digital space is ever-shifting, which means that the best creators shift with it quickly and efficiently.

MM: We’ve always tried to maintain a healthy balance between producing content on YouTube and creating business ventures off-platform. Our next project is the biggest one yet, and we can’t wait for you all to see it!