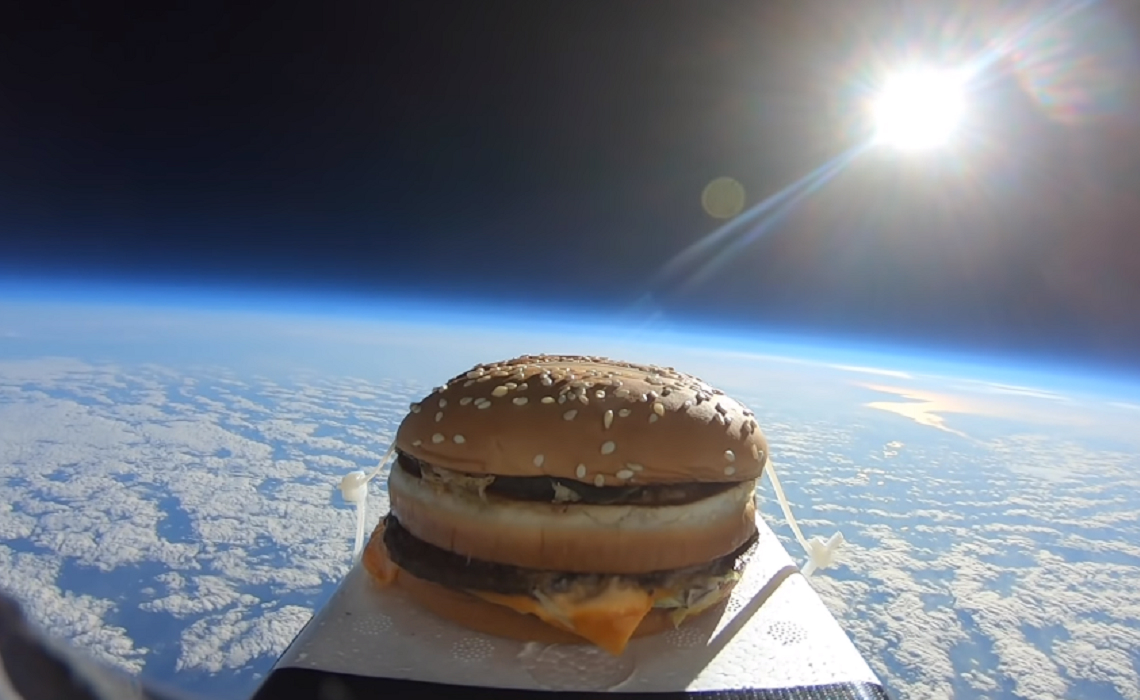 Popular YouTube Stuntsman Was Behind The Mysterious Spacefaring Big Mac Found On A U.K. Soccer Field

This past Wednesday, a frozen Big Mac landed on the training field at the Colchester United Football Club in Essex, England.

The sandwich had been zip-tied to a little platform. That platform was attached to a polystyrene box. Inside the box was a GoPro. The whole thing was kitted out with a parachute.

When the club secretary phones the media department, it’s normally something interesting – transfer news, contracts being signed, that sort of thing.

But this time? There was a burger that had been found at the training ground.#ColU pic.twitter.com/lOXsSQbFZZ

Then the phone rang. A man on the other end explained that the Big Mac (and accessories) belonged to him. And the reason it was frozen? He’d launched it into space.

That man was Thomas Stanniland, who regularly enacts stunts like this for his YouTube channel Killem, which has 2.7 million subscribers. He’s based in Sheffield, England — about 167 miles away from Essex — and he drove more than three hours to retrieve his spacefaring burger. Once at the club, he revealed (in a video posted to Colchester United’s Twitter) that he’d sent the Big Mac on its journey using a weather balloon. The balloon traveled about 24 miles up and breached space before popping and sending the burger drifting back down to earth.

Stanniland documented the stunt in his latest YouTube video, I Sent a McDonald’s Big Mac to Space & Ate It, uploaded today. In the video, he takes viewers through the full journey, from ordering the Big Mac to retrieving its flash-frozen remains.

And yes, he did eat it. His verdict: dry, crumbly, and overall “not very nice.” That’s not surprising considering all the time the burger spent outside — oh, and the fact that space is a bone-chilling -454.81 degrees Fahrenheit.

You can see Stanniland’s video below.