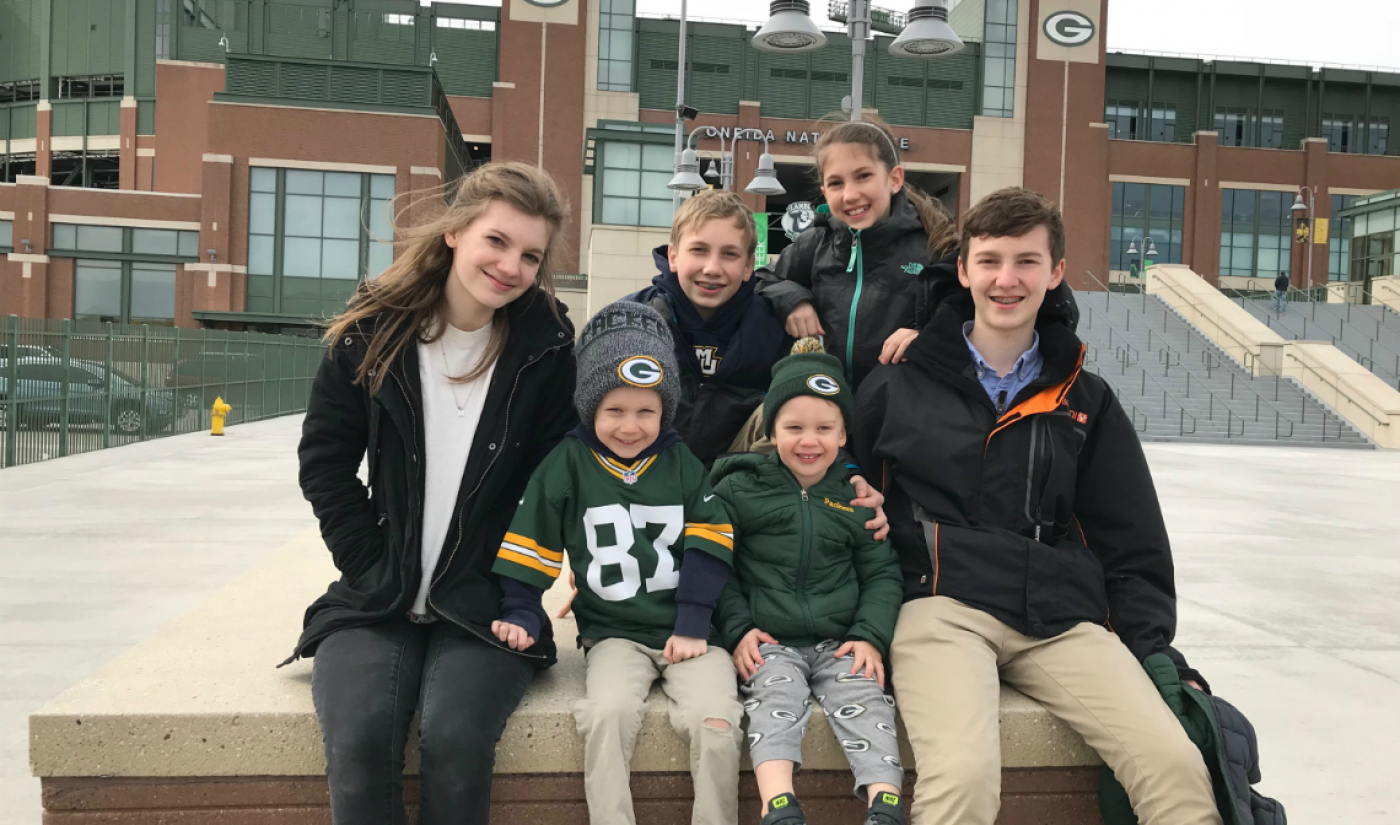 For the six-kid family behind the YouTube channel That’s Amazing, there’s always trickery afoot. The channel is primarily starred in and managed by Tommy, 17, and Matthew, 14, but their four siblings — Maggie (16), Isabel (11), Colin (5), and Owen (3) — and parents are also involved in making the channel into a veritable emporium of trick shot content.

That’s Amazing has caught trick shot trend waves like water bottle flipping, extreme sports, and card throwing, and the channel’s popularity has Tommy, Matthew, and their siblings a Subway commercial, a sponsorship from LEGO, and an upcoming collaboration with Whistle.

But, as the brothers share below, they balance running their channel with school and sports — and as for their video production methods, they say they’re “scramblers, not schedulers.” All of that certainly makes for a chaotic household, but it also makes for a vibrant channel where viewers never quite know what tricks That’s Amazing will get up to next.

Check out our chat with Tommy and and Matthew below.

That’s Amazing: AMAZING, of course! We’ve dreamt about this for a while, and we never would have reached this point without our fans. One million is a big number! Thank you to all the subscribers who continue to click on the vids, like, and share them. We love to hear that people enjoy our videos. Keep the comments coming — we see you!

Tubefilter: Tell us a little about how you two got into doing trick shots. Were you inspired by other YouTubers? How did you decide to start your own YouTube channel?

TA: Tommy created a YouTube channel when he was about 12 years old so he could post our goofy family videos for our cousins. Then, after seeing some amazing YouTube artists, we started posting hand drawings of NBA stars such as LeBron James, Steph Curry, and Dwyane Wade. Those videos are hilarious to watch now! The channel then pivoted to video games after Tommy posted a video game “hack” for First Touch Soccer 2015, when he realized a way to buy Zlatan Ibrahimović for cheap. That video surprised us by actually getting hundreds, thousands, and then tens of thousands of views. So, more FTS ’15 hack videos followed, of course.

But what we loved most on YouTube were the trick shot channels: Dude Perfect, How Ridiculous, Brodie Smith, and Legendary Shots. We wanted to make videos like they did. With a two tiny, half-broken cameras to go along with a new GoPro, we began making trick shot videos. And here we are today.

Tubefilter: What do you think makes your voices (and your tricks) stand out despite all the noise on YouTube?

TA: A couple of things. We wanted our videos to be high-quality, much like the big trick shot channels. We know we didn’t succeed at first, but we were noticed when we spent hour upon hour making the best water bottle trick shots on the internet. Sure, our video quality was still quite poor, but our shots were unique and unmatched by even the big channels. The quality of the shots — made by kids and even toddlers — propelled us into the YouTube spotlight.

Since then, we have improved our cameras, filming, and editing, but most importantly, we still try to make creative, unique videos, and make shots never seen before. We think people notice our hard work, and it may take them by surprise because we are just kids.

Tubefilter: What else do the two of you get up to in your daily lives? Do you go to school? Have any non-YouTube hobbies?

TA: Unfortunately, we do go to school (we’re only half kidding). Tommy is taking three Advanced Placement courses, plus physics, so school is a big part of our life. Both of us have played soccer for the high school team and basketball for our church team, although Tommy stopped playing both sports this year — partly because he has little spare time, considering his school courses and YouTube. We play videos games a bit, but we typically spend our free time creating videos. And whatever time we have left over is often spent playing basketball on our knees against our little brothers.

Tubefilter: What’s your production process like? How often do you film, and how long does it take you to edit? Do you have a set upload schedule?

TA: You could say we are more “scramblers” than “schedulers.” We try to release a video once every two weeks or so, but we rarely have a video waiting for a scheduled release. We’d love to set a particular posting day, but it just doesn’t work for us. Our trick shot videos are often filmed over a period of a couple of weeks. We first have to clean up the area of the house where we will be filming (yes, our house is always a mess with six kids), then we set up GoPros and tripods and start recording. We do a lot of our filming on the weekends.

If we are filming on location, such as in an arena, or if we have a collaborator in town, our dad often will help with the filming. And our sisters, and even occasionally our mom, will also help when needed. But mostly we set up our own cameras.

Matthew uploads the shots at the end of a day and adds them to a working draft. This allows us to get a feel for what the video will look like, and it is easier to see what else is needed. If we forgot to intro a shot, or if we need a transition, we may go back and film some extra footage to complete the video. Tommy then edits the video. Depending on the video, editing may take anywhere from six hours to 20 hours!

Tubefilter: There’s an old saying about not going into business with family, but obviously the two of you–as well as your siblings and parents–are an excellent team. Do you face any challenges working together on the channel?

TA: Hmm. We often have different ideas on what video we should film next, what shots to do, what day we should post, what time we should post, and what thumbnail to use. But other than that, we’re all good.

Tubefilter: How do you come up with ideas for new trick shots?

TA: Believe it or not, but we almost always eat dinner together as a family. Just about every day. So, the conversation often comes to YouTube, and everyone has an opinion. When we decide on a trick shot video theme, we all just shout out ideas. And our uncle and cousins sometimes text us ideas as well. It’s a true collaboration, but Matthew and Tommy get the final say.

Sometimes the time dictates what we end up doing. If it’s been a week since the last video and we don’t have a trick shot video close to being ready, we’re pretty much forced to think of something that we can get done in the time we have available — which means we often go with a challenge video. Whatever we decide, our goal is to make videos that are creative and unique. And we certainly keep an eye on trends.

TA: The feeling you get when seeing your real-time views take off on YouTube analytics. It’s when you know that your hard work will be seen.

TA: We are working with Whistle on a big, record-breaking collaboration this year, so stay tuned for that! We have many ideas for trick shot videos that we are very excited about, but they are just ideas at this point. We are always looking for spare time to film them. We also are in talks with an NBA all-star about doing a video, and have two potential arenas to film in. We have learned by now that many video leads fall through, so we never know what exciting opportunity will actually be filmed. But we can say that we will scramble as much as we can to get new videos out on a regular basis while we’re in school and as we survive winter in Wisconsin — all the while looking forward to summer, when we can devote our days to the channel. We can’t wait!

You can add yourself to the ranks of That’s Amazing’s more-than-a-million YouTube subscribers at their channel YouTube.com/ThatsAmazing.