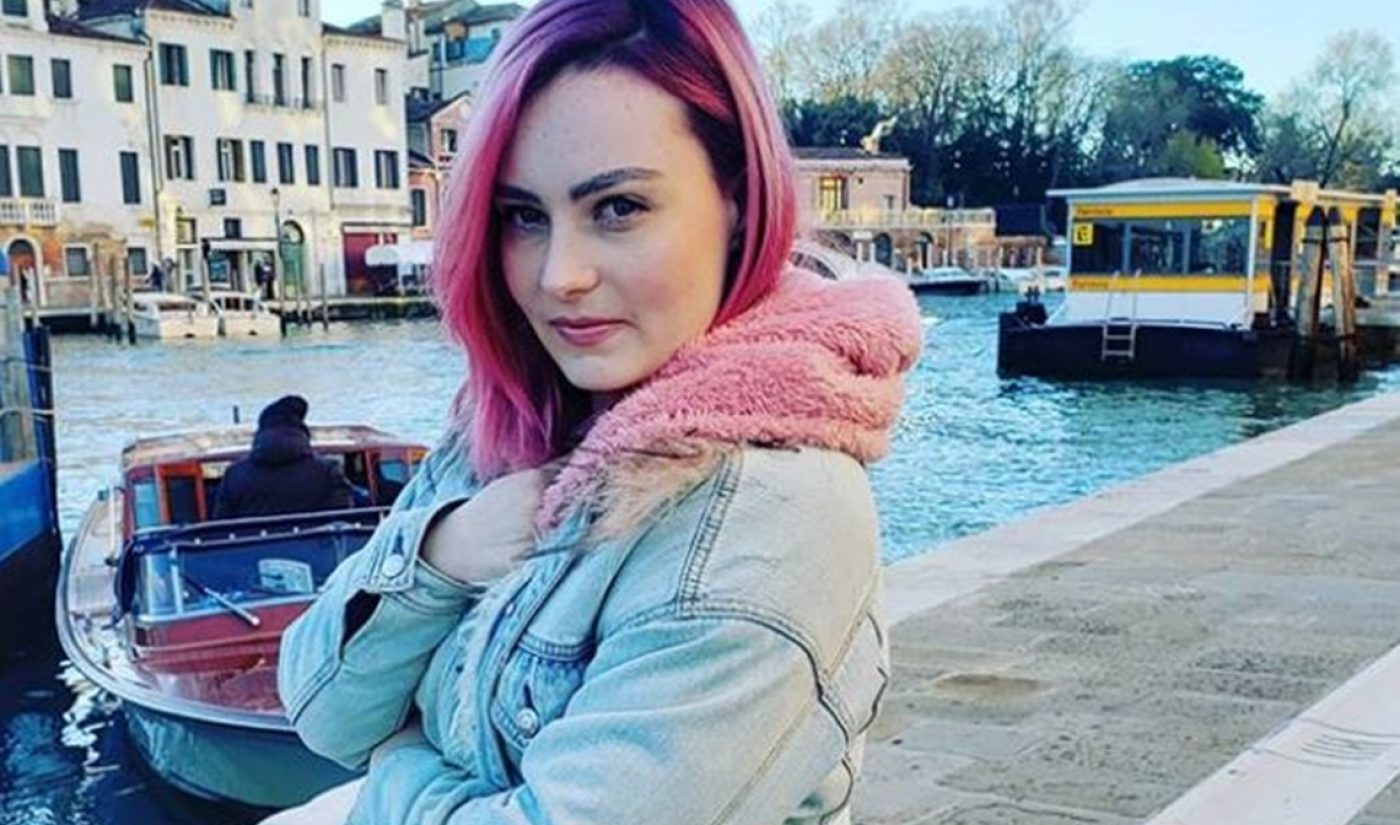 Molly Burke describes herself as a “typical sushi and make-up loving millennial girl.”

I guess that’s true, but it doesn’t nearly give enough credit to Burke’s atypical YouTube trajectory, outsized and gregarious personality, and overall attitude and aesthetic that can’t help but make you smile. Since starting YouTube back in July 2014, she’s racked up nearly 1.8 million subscribers and almost 90 million views thanks to a vlog format that accentuates all the aforementioned attributes.

Some of the world’s biggest brands have become fans, too. For instance, the 24-year-old just signed on as a spokesmodel for the American Eagle-owned underwear brand Aerie and partnered with Samsung on a TV spot for last year’s Oscars.

It’s that last trait that’s at the core of Burke’s biggest brand deal to date — a 10-episode original series created in conjunction with Samsung dubbed The 10 Year Journey. The “10 years” relates to the fact Burke lost her vision to retinitis pigmentosa roughly a decade ago and the series itself has been percolating in Burke’s brain for years. She says that she partnered with Samsung in order to realize the project — which involves an emotionally-charged voyage to Europe — on a grander scale.

10 Year Journey will culminate with a trip to the Louvre Museum in Paris, where Burke will come face to face with the Mona Lisa. This is a nod to the fact that Burke originally traveled to Paris back in 2008 on a trip with Sunshine Dreams For Kids — a Canadian nonprofit that realizes dreams for children living with severe physical disabilities. Burke, who lost her vision that year, was able to enjoy many of the fruits of Paris, but declined to go into the Louvre because not being able to see the iconic painting would’ve been too painful to bear. Now, she wants to reclaim the moment.

Six episodes of the series are live to date, in which Burke kicks off her European adventure by traveling to Italy to visit the building where the Mona Lisa was initially buried, and — of course — to enjoy the country’s myriad delicacies in an “epic mukbang.”

We spoke with Burke about her experience shooting the series and how it differs from previous videos that have poignantly addressed her vision loss.

TF: You’ve discussed your journey with blindness at great length on your channel. In what ways will this series differ from your previous content on the subject?

MB: This series opens up my vulnerabilities, insecurities, and emotions like no other videos I’ve done in the past. By physically traveling back to Paris for the first time in 10 years, it also emotionally brought me back to that place as well. In doing this, it allowed me to open up and tap into the true feelings I experienced in 2008 in an entirely new way. I share experiences and stories I’ve never opened up about, and most importantly, overcome some of my demons. On top of that, I discuss my mental health on a totally new, raw level.

TF: How would you sum up the concept and format of ‘The 10 Year Journey’?

MB: The full series will live exclusively on my YouTube channel. Each episode will vary in length from eight to 30 minutes. The 10 Year Journey was designed as a travel vlog-style series where I take on my own personal ‘Do What You Can’t’ — [a slogan that Samsung previously utilized in campaigns with creators like Casey Neistat]. For me, it was going back to the Louvre and standing in front of the Mona Lisa — something I was unable to do on my Sunshine Dreams For Kids trip to Paris back in 2008 following my vision loss.

TF: Is this your biggest brand deal to date?

MB: I met Samsung about a year and a half ago through my friend and fellow creator, Casey Neistat. He’s always been a big supporter of mine and believed that Samsung was a perfect fit for me. I’m so glad he introduced us because we’ve been able to work on a number of amazing projects together, including being in their 2018 Oscars commercial and traveling to their HQ in South Korea to meet with their mobile accessibility team.

Although we’ve worked together in the past, and I’ve worked with numerous other brands, this is certainly a one-of-a-kind brand partnership and the most ambitious project I’ve ever taken on.

TF: What was one of your favorite moments shooting the series? The most challenging?

MB: My favorite moment has to be paragliding off the cliffs in Monaco and landing on the beach. My most challenging moment, surprisingly, was the emotion I felt leading up to the final episode. We filmed a conversation in my hotel room the night before that was actually more emotional than even going to the Louvre the next morning.

Episode six was also very vulnerable and difficult to film due to a number of factors. It was the middle of the 10-day trip and we were all hitting a bit of a wall — given that we were filming nine videos in 10 days in 2 countries and 6 cities. It was freezing cold, we had a few sudden changes to the schedule, and, on top of that, it was the first episode where I truly opened up and discussed my mental health in a way I’ve never done before.

MB: I’ve been working on the series for about two years now — before my following was what it is today and before I met the team at Samsung. However, I knew to accomplish such a large undertaking, I’d have to find the perfect brand partner in order to make the series as epic and impactful as I knew it could be.

In partnering with Samsung, they supported me in fleshing out the creative but still gave me the freedom to ensure the messaging and creative were truly in my control. They helped with all the logistics and provided a producer, Ben Cannon, and a videographer, Sam Evans — both of whom you’ll see in future episodes. We also had my mom, my guide dog Gallop (of course), and someone from the creative agency on the ground as support. I typically just have my mom, Gallop, and maybe videographer — but often my mom just films on her Galaxy Note 9. With such an aggressive schedule, it was crucial to have all hands on deck.

TF: What advice do you have for brands in partnering with creators?

MB: One thing I consistently hear from other creators is that they want long-term partnerships with brands, not just one-off deals. Something I also appreciated about working with Samsung was the creative freedom and control they’ve given me. Many brands need to push their brand messaging or key talking points down a viewer’s throat, but Samsung believes in truly partnering with someone who shares the same philosophy as they do. I think for brands, it’s important to look for creators who have an authentic voice and connection to your company, as well as a good audience fit and a unique style of content that stands out.