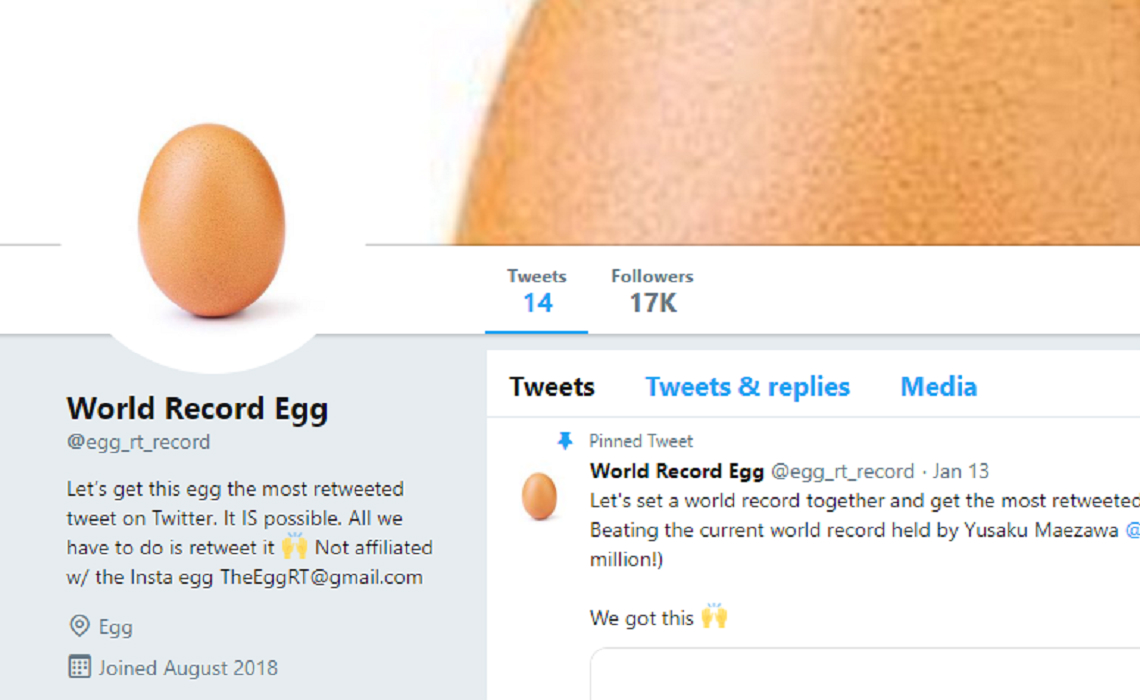 The egg that defeated Kylie Jenner is back.

In case you’re not aware, a photo of a single brown egg became the most-liked post on Instagram this week, beating Jenner’s February 2018 post introducing her then-newborn daughter Stormi. The egg currently has 42.7 million likes (up from 31.7 million yesterday), and its Instagram account, @world_record_egg, has been officially verified. (Jenner’s photo has 18.5 million likes, up from 18.4 million.)

Now, the same brown egg has emerged on Twitter, vying to be the platform’s most-retweeted tweet. However, while the account, @egg_rt_record, is using the same brown egg photo, the person running it is “not affiliated w/ the Insta egg,” according to the profile’s bio.

Nevertheless, the Twitter egg is drawing in a similarly booming crowd. A tweet posted Jan. 13 asking people to help set a Twitter world record has, at press time, been retweeted 732,000 times, making it the No. 23 most-retweeted tweet on the platform.

To become No. 1, the egg will have to defeat not Kylie Jenner, but Japanese billionaire Yusaku Maezawa. He recently dethroned former No. 1 tweeter Carter Wilkerson, a teenager whose 2017 plea for a year’s worth of free Wendy’s chicken nuggets resulted in him netting 3.5 million retweets. Maezawa’s tweet from Jan. 5 offered to reward 100 randomly chosen retweeters with an equal share of 100 million yen (roughly $923,000 total), and was subsequently retweeted 5.2 million times. (The contest has since closed. Maezawa did not announce the winners’ names publicly, but tweeted that he privately messaged all of them.)

Keep an eye on the below tweet to see if the egg will reign.

WHO RUN THE WORLD?