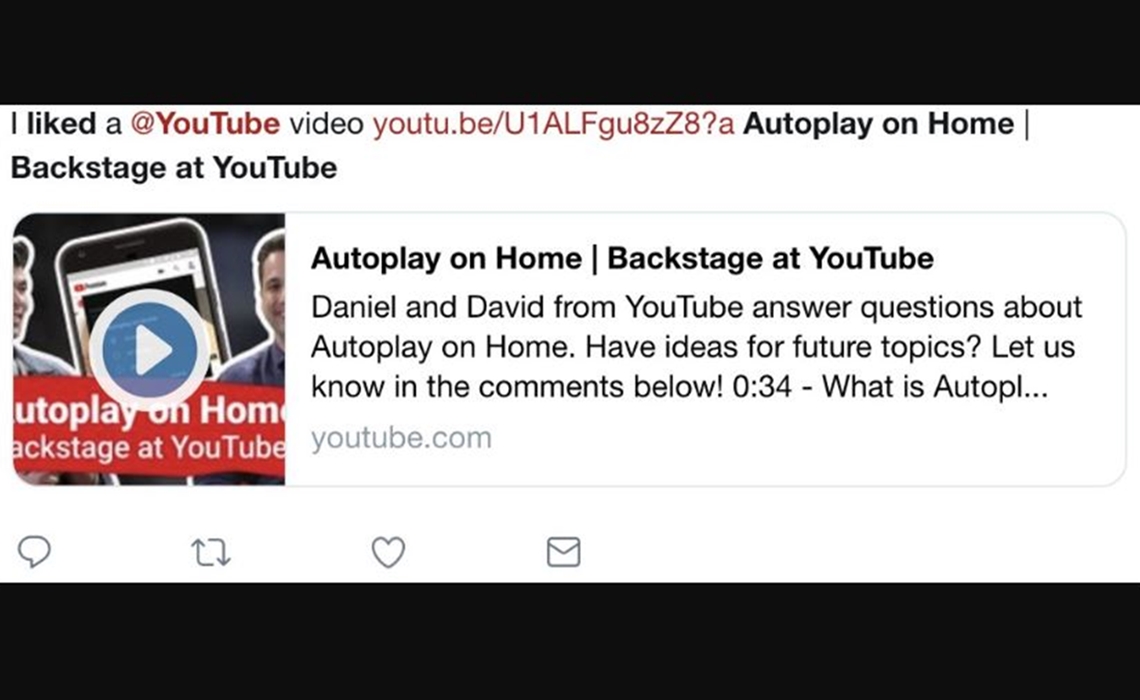 As of Jan. 31, YouTube is getting rid of automated Twitter updates — or the formulaic Tweets that can be sent out (pictured above) whenever a creator or viewer engages in activity on YouTube, including posting or ‘liking’ videos.

The elimination of the feature, which will also apply to automated posts on Google+, was due to the fact that “social sharing works better when the message is more customized and takes advantage of social media features, such as @mentions,” YouTube wrote in a post on its Help Forums. The update only applies to future shares, YouTube clarified, and automated Twitter posts that have already been sent will remain online.

The option to automatically post YouTube activity to Twitter and Google+ was launched “many years ago,” YouTube says, and could previously be enacted in the ‘Connected Apps’ tab within ‘Settings’. The company notes, of course, that users can still share videos on social networks using the ‘Share’ button right after a video posts, though such activity can no longer be activated and and shares can only happen in real-time during the upload flow. YouTube says that creators can still add social media links to their channel banners — including a Twitter profile.

Some creators were miffed by the change, explaining that they frequently used the automated feature to share pre-scheduled videos. YouTube noted that while it would no longer offer tools to help creators socialize pre-scheduled videos, it suggested third party software that can do just that, including IFTTT and Crowdfire.

You’ll still see the option to share right after you successfully upload and publish a new video but you won’t be able to schedule those tweets. Will pass along your feedback, there are also some 3rd party tools people are mentioning here that may help: https://t.co/Fz8NOf3MTa