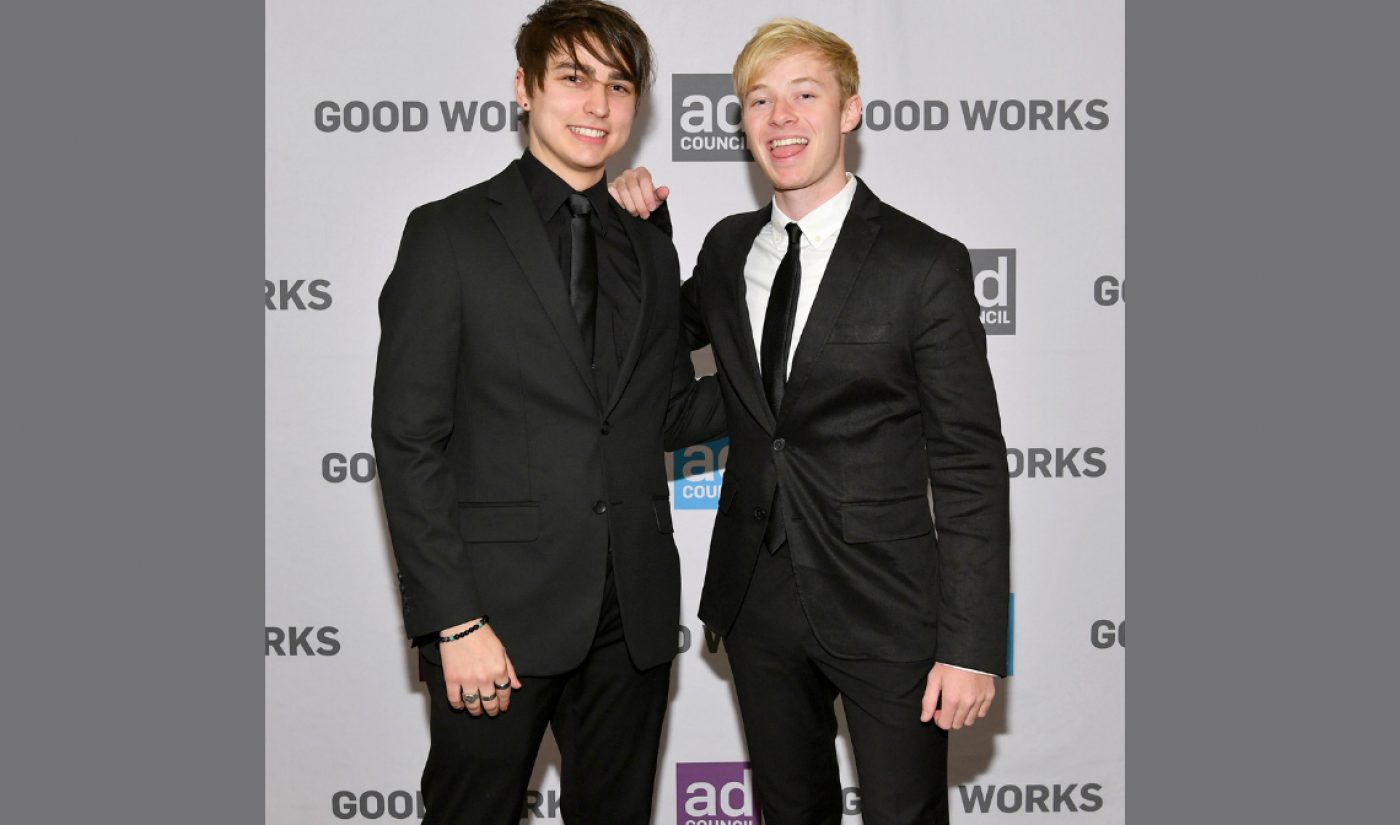 Among more than 1,500 attendees at the Ad Council’s 65th annual Public Service Award Dinner in December were Sam Golbach and Colby Brock, the self-dubbed big brothers of the internet.

Golbach and Brock, whose shared YouTube channel Sam and Colby has 2.1 million followers, are known for their videos exploring abandoned and empty places. But the duo was invited to the dinner (which raised a record $5.3 million dollars, recognized those who support the Ad Council and its many social good campaigns, and shared the stories of folks impacted by those campaigns) not because of the millions of views their exploration adventures garner each month, but because of their altruistic endeavor: The Life Project.

Originally launched in 2016 and in development for relaunch right now, The Life Project offers videos and podcasts from Golbach and Brock that are meant to teach kids necessary life skills they don’t learn in school. The project’s hub also serves as a community center, giving members a way to connect to each other through forums. (Membership and access to the project’s content currently costs $17 per month.)

“Ever since we started social media, we noticed that a lot of the fans were sad and upset and always [direct-messaging] us about their problems,” Brock tells Tubefilter. “We could relate to that when we were younger. So we decided we wanted to make a change, as much as we can, and try to help them as much as possible.”

Golbach adds, “We felt lost a lot of the time, and most of [what we do] is a helping hand. We just talk to them and get them through their problems. We always thought, if only we had that big brother to tell us what to do, we’d be so much more ahead in life. Now, since we never had that, we want to be that to our fans.”

To better bring together their members, Golbach and Brock are building The Life Project a brand-new website with content backed by mental health professionals. Their goal moving forward to relaunch The Life Project completely, involve other influencers, and get together with more credible backers like therapists and psychiatrists.

The duo acknowledges that a lot of their YouTube content is “clickbait titles and funny trending videos,” but say they think creators have a responsibility to turn their success to altruism.

“Not a lot of people do this, and not a lot of people even think about it,” Golbach says, noting that he and Brock experienced a lot of the same self-consciousness and anxiety their fans express. “We knew we could overcome it, so we want to help them overcome it as well. This is our entire purpose on social media.”

Golbach and Brock aren’t currently involved in Ad Council campaigns, but hope to work with the organization — which has done mental wellness campaigns like Seize The Awkward and She Can STEM with well-known YouTubers like Markiplier, Liza Koshy, and Hannah Hart — in the future.

To hear the pair talk about The Life Project, check out their announcement video below: