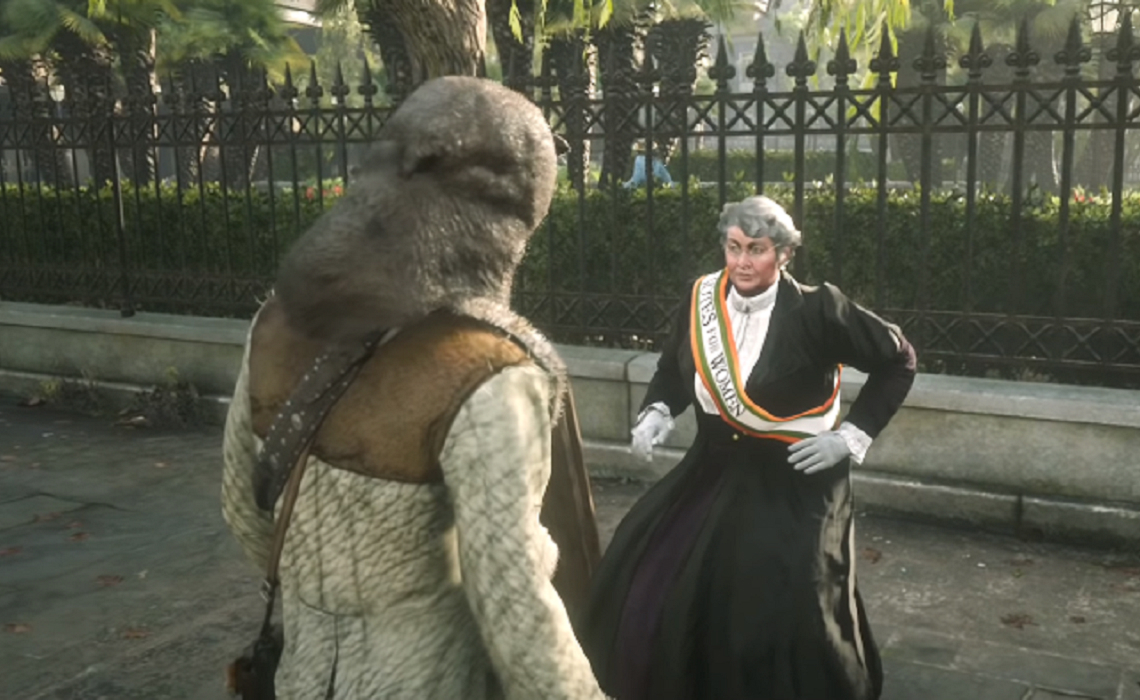 For context, Red Dead Redemption 2 is set in 1899, and players can interact in both positive and negative ways with any non-player character in its vast world, including greeting them with a polite “Partner,” to murdering them in virtually any way players want, from shooting them to shoving them in front of a train.

Shirrako, who has 525,000 subscribers and has been averaging 14.5 million views per month, uploaded his first video with the suffragette, apparently taken while he was livestreaming, on Oct. 31. In the video, he punches her out, something he told Motherboard was “a funny moment.” He added, “When you try to shop for clothing in the game, your dialogue with the shop keeper [sic] keeps being interrupted by her shouting, so I simply wanted to shop in peace.”

In later videos, he takes things further. In one, his player character is shown beating her, lassoing her, and dragging her to a nearby bayou, where he feeds her to an alligator. The clip closes with him kicking her corpse repeatedly in the head before blowing it up with dynamite. In another, he hogties her and takes her into a cave, where he drops her into a deep crevasse.

Two days after his videos garnered more attention in the wake of Motherboard’s story, YouTube banned him for “graphic content that appears to be posted in a shocking, sensation, or disrespectful manner,” noting in an email to Motherboard that it does not “allow content that’s intended to incite violence or encourage dangerous activities.”

Other YouTubers quickly spoke up in his favor, including Daniel ‘Keemstar’ Keem (operator of the popular channel DramaAlert, which has nearly 4.5 million subscribers), saying it was worrisome to start banning people for their actions in a game.

The outcry apparently promped YouTube to take another look at the situation, as Ryan Wyatt, YouTube’s head of gaming, responded to Keem on Twitter, saying the videos had been re-reviewed and Shirrako’s channel would be reinstated, with the violent videos age-restricted to users over 18.

When further questioned by Richard Lewis (the director of talent and programming at ESP Gaming), who alleged the YouTube employee behind Shirrako’s banning had “clearly [banned him] after consultation with journalists who had written articles” about Shirrako’s videos, Wyatt added that the employee would be “educated on this outcome and how to avoid repeating this mistake.”

As The Verge points out, Shirrako has uploaded numerous other Red Dead Redemption 2 videos where he beats and/or kills non-player characters, including a character based on Hitler, KKK members, a Chinese man, and a whole town.

After his channel was reinstated, Shirrako uploaded a new video where he fed the suffragette to pigs.