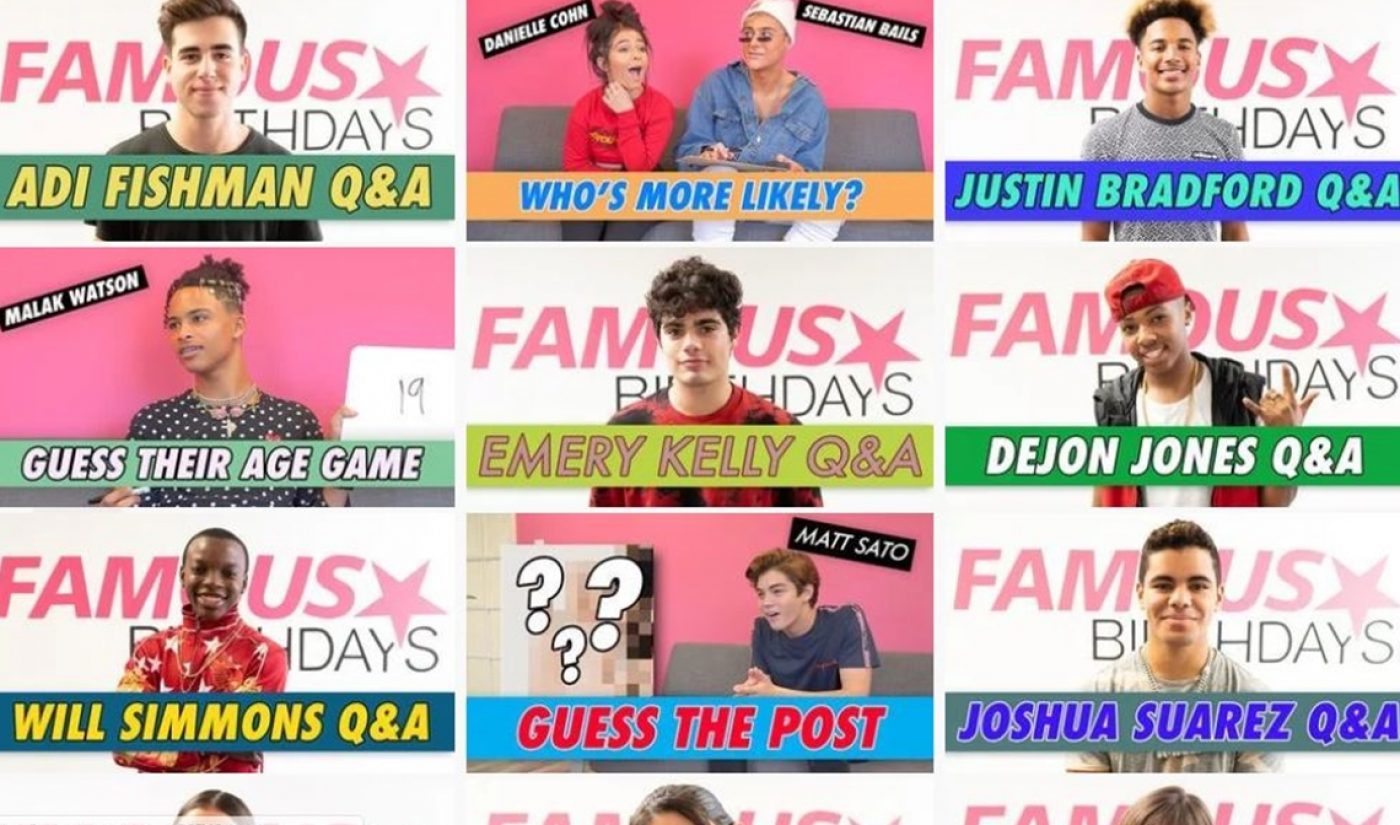 Famous Birthdays wants to be more than just the Wikipedia for the young social media set — an online database comprising birthdays and interesting factoids about the world’s buzziest influencers.

Today, the company launched a video platform that has been in the works since the beginning of the year. Founder Evan Britton tells Tubefilter that Famous Birthdays’ video efforts will function with the same philosophy as its flagship site: users will determine which celebrities are trending via searches and on-site voting (known as ‘boosting’), and the company will create videos with top-trending personalities. The clips — all unscripted — will fall into five categories: Q&As, games and challenges, event coverage, performances, and birthday-themed content.

Content will be distributed natively on Famous Birthdays’ flagship site, and the company will also strategically publish certain videos to YouTube, Britton says — presumably those that feature influencers with a substantial YouTube presence. On Famous Birthdays, a video section on the right side of creators’ profiles will feature links to videos, and users can also search for videos via the main search bar or within a dedicated section at the bottom of the homepage.

Check out a launch video for the new platform, featuring Chicken Girls stars Dylan and Caden Conrique, below:

All told, six-year-old Famous Birthdays has 18 million unique visitors who visit the site’s trove of 150,000 profile pages each month. And five months ago, the company launched a standalone Spanish-language edition, Famous Birthdays Espanol, which has just surpassed 1 million monthly users.

Britton says that video was a natural outgrowth of Famous Birthdays’ mission. At first, influencers would come to its offices to take pictures in front of the company’s logo, and share them on social media. Slowly, this evolved into video shoots. These videos initially served to build out users’ written profiles. But once its arsenal of video content had grown, Britton says Famous Birthdays opted to pull the trigger on a full-fledged hub.

“The celebrities understand how much our platform matters to their fans and the industry as a whole,” Britton says, “so it benefits them to have a video featured on their Famous Birthdays profile.” And unlike other purveyors of video aimed at Gen Z, such as Viacom-owned AwesomenessTV, Famous Birthdays has no plans to move into scripted content, Britton says, explaining stating that the unscripted format aligns with its founding mission of furnishing fans with snacky nuggets about their favorite digital stars.

Famous Birthdays videos can also serve as promotionals tool for influencers when they’re looking to spread the word about an upcoming project. Dance Moms star Nia Sioux, for instance hosted a Q&A last month in honor of her new film, Runnin’ From My Roots, which Famous Birthdays then promoted across its social channels.