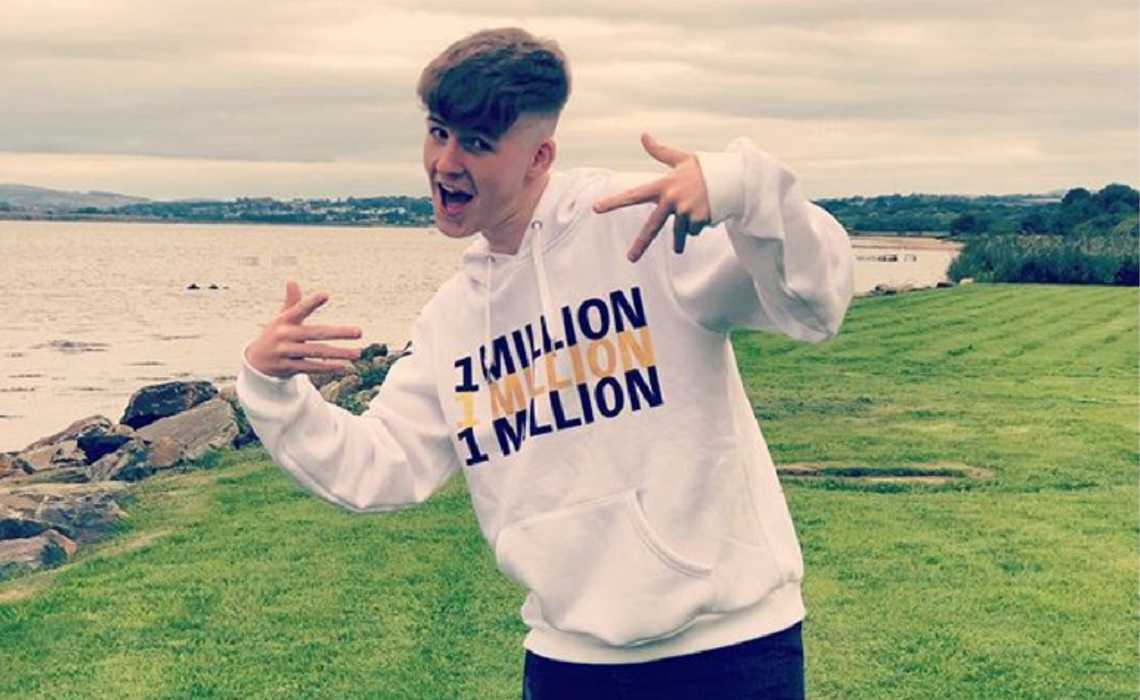 Irish YouTuber Adam ‘TheNewAdamb99‘ Beales is big on connecting with people, whether it’s with his audience or his family members, who frequently star alongside Beales in his diverse range of prank, experiment, and commentary videos. And as of recently, Beales now connects to an audience of more than one million subscribers.

Beales, who’s 18, has been a YouTuber since 2012, and in that time has amassed 131 million views. He’s dabbled in DIY crafts videos and life hacks, and in recent months has been involving his brother Callum in more and more of his videos. Callum, who’s nine years old, also has his own YouTube channel, TheNewCallumb08, with nearly 50,000 subscribers of his own.

Though he became a YouTube Millionaire just a couple of weeks ago, Beales is already nearing 1.5 million subscribers.

Check out our conversation with Beales about his success:

Adam Beales: It is unbelievable. However, as strange as it sounds, it feels no different than having 10,000 subscribers, because I still give my utmost and full effort to each and every video that I publish on my channel. If I had to say one thing to my fans, I would say a MASSIVE thank you. They are the ones who put me in this position today. And for that, I am forever grateful — I’ll never take what they have given me for granted.

AB: A love for video-making and video-editing. I live for people’s reactions to what I create. I think it’s mad that you can make people feel different emotions just through video. Whether that is happy, sad, inspired, challenged, or entertained, it gives me the drive to create more. It’s also very satisfying when you finish editing a project that you are proud to publish. YouTube just seemed like the natural platform to publish these videos.

AB: If taking that question literally, it would be my accent, lol! However, I think it’s the relationship between my little brother and I that has made us stand out as siblings due to the fact that we are very close. I am also delighted to have recently introduced my parents to the YouTube channel. Through publishing more videos, I hope to show my audience how tight we are as a family. I am very thankful that we have these relationships.

TF: Anyone who watches your videos will know your younger brother is a big star on your channel. What made you decide to film videos with him?

AB: Again, it’s probably due to our close relationship. We love recording together because it’s obviously more fun, and that is expressed on camera. He loves being with me on video, as we can be our true weird selves!

TF: What draws you to making comedic content — pranking especially?

AB: I think it goes back to the viewer’s reaction — I love making people happy by smiling or even laughing! A lot of which is orchestrated through prank videos. However, I’ve also tried to diversify my content recently by introducing more inspiring content like my one million special video or ‘The Last Exam‘ video. One of my most popular videos is the ‘Never Have I Ever‘ challenge with my little brother, which was hilarious to film because it’s just two brothers having banter on camera for over 11 million people (total views on that video).

AB: That is a hard question. Editing is definitely the longest process, but probably the most creative stage of the whole YouTube upload process. I feel that editing can either make or break a video. There are so many things that you can do with editing. Your mind and creativity are the limit, whereas with filming, you just have the footage to work with. Editing is where the magic happens! However, one of the biggest perks of being a YouTuber is reading the comments. Within the first 10 minutes of a published video, I can see hundreds, if not thousands of comments, all of which express interest or dislike in the video. It is one of very few platforms where you can get an immediate sense of how content will perform. Reading viewers’ comments is very special to me.

AB: I hope to go on an Ireland tour as a teaser to, hopefully, a bigger UK tour in the future. I would also love to get into making a novel, as I can create reactions from words — the main reason why I first started my YouTube channel! If possible, I want to spread my wings over as many industries as possible, as I may stumble upon something that I love along with YouTube, whether that may be acting, TV, presenting, writing, music, etc. However, YouTube will always be my lifeblood. I will never stop creating content. Here’s to two million subscribers!

You can add yourself to the ranks of Beales’ more-than-a-million YouTube subscribers at his channel YouTube.com/TheNewAdamb99.