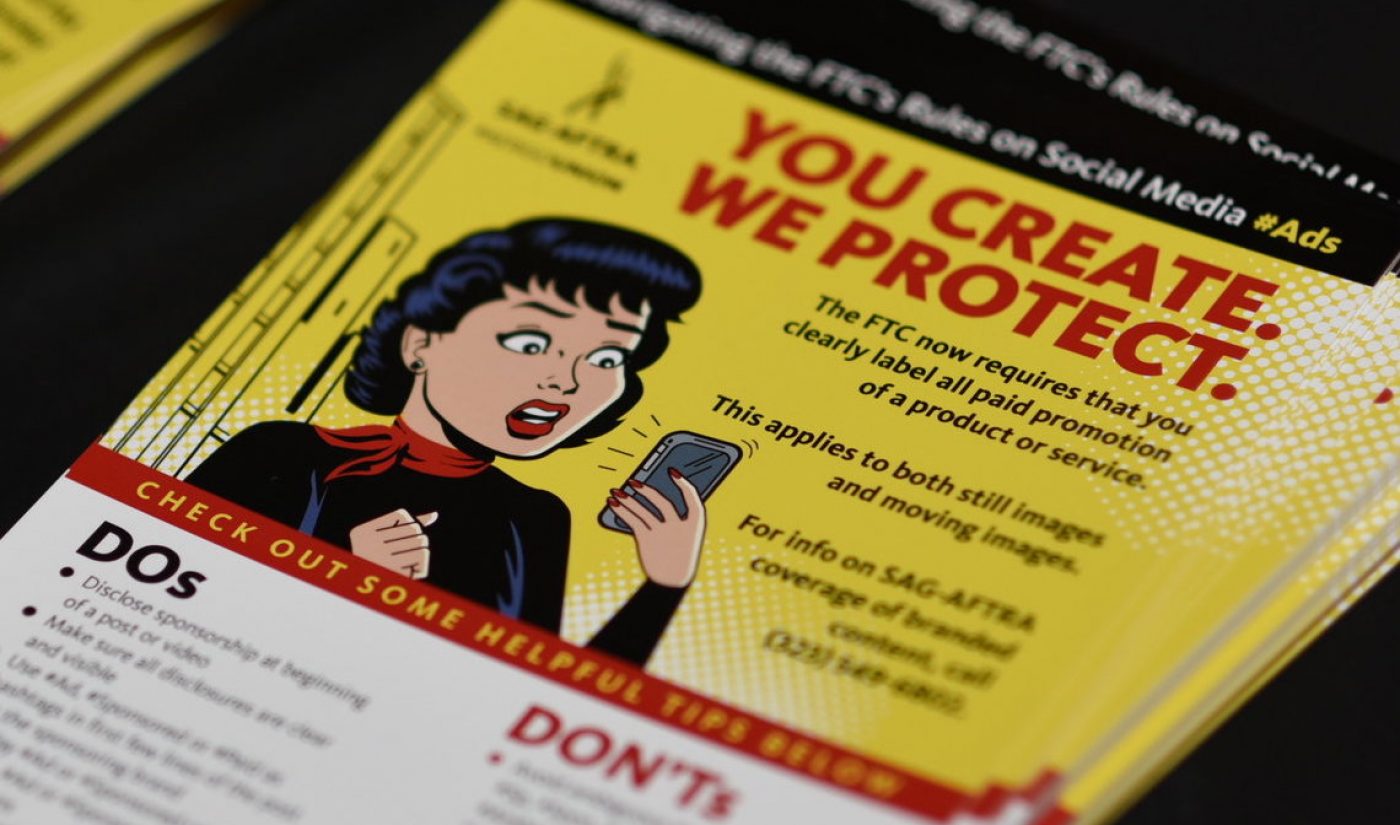 Influencer marketing may be one of the hottest trends in business, but the federal agency regulating it faces many challenges just keeping up with the sector’s rapid evolution and endless new gray areas.

That’s the takeaway from Tuesday night’s Tubefilter panel in Los Angeles, co-sponsored by the actors union SAG-AFTRA, on Federal Trade Commission rules for giving online influencers cash, free products, or services or other compensation in exchange for a role in their programming.

Over a spirited two-hour discussion, Tom Dadouh, the FTC’s Western Division director, gamely tried to draw what in legal circles is called a “bright line” delineating what’s required in disclosing compensation in online videos. “The agency is acutely aware that, in the explosion of social media, authenticity is really important,” Dadouh said. “The FTC is concerned that consumers value objective endorsers. To the extent that you’re not who you say you are, consumers don’t know who to believe.”

Then, as Dadouh was peppered by other panelists and the audience about a wide array exceptions, interpretations, and frustrations, it became clear the bright line is hazy in many places. Panelists and audience members questioned how the FTC enforces rules across not just online media but also reality TV, native advertising, celebrity endorsements, on-set posts and much else.

A guide the agency created for brands, influencers, and agencies several years ago is “constantly evolving,” Dadouh said, as new circumstances and situations arise. He repeatedly emphasized the agency is focused on education and guidance rather than punitive measures. Even where it has filed cases against companies such as Warner Brothers, Sony, and Deutsch, no fines were exacted. The companies were required to stop egregious behavior.

The guidelines for what’s legal start with whether there is a “material connection” between an influencer and a brand, Dadouh said. That could be money, goods, services, even an ownership stake in what’s being touted. If that material connection exists, then “you need to disclose it clearly and conspicuously,” and contextually within the material itself. “This really does protect the integrity of the marketplace,” Dadouh said. “It’s good for business too,” because audiences can trust who’s telling them what. But “clear and conspicuous” has big implications for influencers trying to make a living. Adding required #ad or #sponsored hashtags to a YouTube video can mean plummeting engagement numbers, said panelist Arden Rose, who has nearly 1.5 million YouTube followers. “Anytime I put the hashtag on there, I see a tremendous drop in viewership,” Rose said.

In part that’s because some audience members won’t watch anything with a commercial component, though Rose said she also has fans who tell her they’re happy that a creator they admire is finally getting paid.

But the fall in engagement is also caused by the video platforms’ algorithms, said Larry Shapiro, CEO of Ensemble Digital Studios, which represents a number of influencers. YouTube and other platforms have an economic incentive to punish in-video commercials, so they can sell more ad time wrapped around the influencer videos.

“The hashtag #ad for me, that’s a concern,” Shapiro said. “The minute that hashtag is in there, the views go down. It’s almost taking away something, because it gives algorithms something to push down because they want to sell more pre-rolls.”

To avoid that kind of whack to engagement (which lowers the video’s value to the brand also), Shapiro said, some creators try to game the system by having #ad or #sponsored hashtags show up partway into the video. Whether that meets the federal regulations’ intent is another, more complicated question, one of many on the night.

Brands can cause problems too, Shapiro explained.

“It’s important to protect consumers,” Shapiro said. “Where it gets confusing is the relationship between the brand and the creators. The creators are wanting be more protective of their audiences, (while brands sometimes want to hide their involvement). We end up powering through.”

Ruben Ochoa, whose Disruptiv digital agency represents 16,000 digital performers, said, “the concern is the authenticity of the product. Given the FTC guidelines, it could be off-putting.”

Tubefilter founder Drew Baldwin, also a panelist, said the up-front disclosure on the video and the #ad and #sponsored hashtags essentially cast an entire video as a commercial, even if that’s only a small portion of its content. “If you want to be fully compliant, it’s a complete buzzkill,” Baldwin said.

But the bigger challenges are the many gray areas these days.

Disclosures on mobile video and still-image sites such as Instagram, for instance, are handled differently than video on YouTube and Facebook. Dadouh said disclosures need to be high in accompanying text material, rather than buried at the bottom. “How are consumers experiencing that?” he asked. “They’re not looking at the legalese at the bottom. If they’re not seeing the buried area, it’s got to be up there at the top.”

Celebrities, Dadouh acknowledged, are “a little more complicated.” When NBA star Stephon Curry endorses a basketball shoe brand, most consumers would presume he’s being paid to do so. But when he says something nice about a vacation spot, that might be regulated differently in terms of disclosures.

“Things do get a little more complicated when the celebrity runs a multi-million-dollar branded company,” Dadouh said. “What you wouldn’t want is to have the government responding in a strait-jacketed way to every situation.”

Several other panelists repeatedly referred to the seemingly constant shilling and product placements in reality shows and online presences of Kardashian family members as examples of uneven enforcement when it comes to celebrities.

For that matter, panelists grumped, why are online videos required to disclose endorsements at the show’s start, while traditional TV shows only must acknowledge product placements and “promotional considerations” at the end, typically in fast-moving credit crawls. Dadouh didn’t have a response.

It’s even difficult to figure out what’s okay when an actor is on set, and the producer suggests they tweet about it to their followers, said SAG-AFTRA Executive Director David White, who moderated the panel. For one thing, the actor should get paid for it, because such posts have marketing value. For another, there’s a clear commercial/marketing component to such posts, which is why the producer wants it done, but it also probably should include disclosures.

And while native advertising, a big trend in text-based publishing, is largely regulated the way video endorsements are, it has some differences, Dadouh said.

“The principles are the same, but what’s different is whether this is commercial speech versus news content,” Dadouh said.

Other unresolved questions: If you disclose the first time you receive something, like lipstick, do you have to keep disclosing that relationship every time you wear the lipstick in subsequent videos? What happens with disclosure requirements when a brand repurposes content multiple times to other sites and platforms? And Shapiro pointed to a new trend: “Brand ambassadors” who are influencers created by the brand itself, inverting the more typical influencer-brand relationship.

“It undermines the creative spirit of the Internet,” Shapiro said. “They’re creating these influencers who are complete shills for these companies.”