The Stars of YouTube Rewind 2012: Where Are They Now? 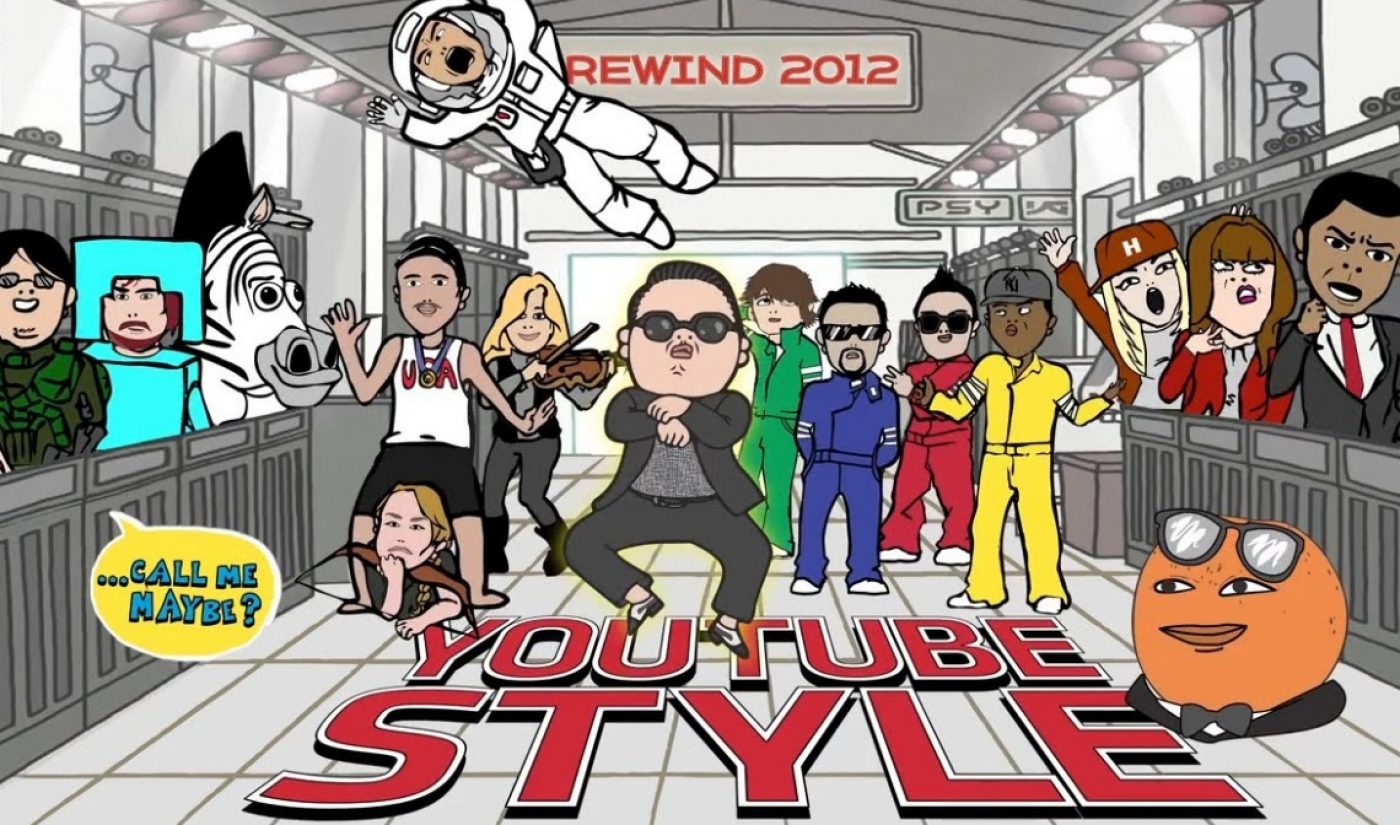 The 2017 edition of YouTube Rewind recently landed on the world’s top video site, bringing together hundreds of creators for a look back at the year’s top videos, trends, and stories. Led by its star-studded cast, the celebratory clip has received more than 160 million views and has inspired numerous parodies.

Recent iterations of YouTube’s annual end-of-year tradition have been so stuffed with star power that most creators get only a few frames of screen time, but that wasn’t always the case. The first time YouTube invited multiple creators to join its Rewind production was way back in 2012, when more than two dozen participated in a recap of the year’s most notable moments.

Now that five years have elapsed since that video came together, we here at Tubefilter figured it would be fun to look back at “YouTube Rewind 2012” to figure out where its stars are now, where they were then, and how far they’ve traveled over the past half-decade. Consider it a YouTube Rewind rewind.

Walk Off The Earth

The Canadian fivesome kicked off YouTube Rewind 2012 by playing Psy’s “Gangnam Style” on a single guitar. The performance mimicked the group’s most famous video, a five-person, one-guitar cover of Gotye’s “Somebody I Used To Know.” Five years later, Walk Off The Earth are still making music, and earlier in 2017 the group revisited the viral video that made it famous. “Gangnam Style” was the most popular music video of 2012. In December of that year, it became the first clip to reach one billion views on YouTube, a milestone that was stunning at the time. Now, there are 40 videos with ten-digit view counts, two of which have notched more hits than “Gangnam Style.” Psy’s still doing fine for himself, though; the K-pop icon still gets tens of millions of views for his music videos, and “Gangnam Style” recently surpassed the three-billion benchmark. Performer Iman Crosson has retired his legendary Barack Obama impression, at least on his YouTube channel, since 44 left the Oval Office in January. He’s still making videos, though. His spoof of the horror film It recently received one million views. It’s safe to say he’s fared better than Vaughn Meader. It’s been an interesting five years for comedian Kassem Gharaibeh. In 2012, his man-on-the-street show California On put him among YouTube’s upper echelon, but the frequency of his uploads slowed down before almost stopping completely around 2015.

Meanwhile, the multi-channel network he co-founded, Maker Studios, has been assimilated into the Disney Digital Network. Luckily for Gharaibeh, he managed to sell Maker at a good time. “The truth is, I’m still very, very rich,” he quipped upon returning to YouTube earlier this year, “and I think that’s the best time to come back and start making videos, when I don’t need to.” In 2012, Grace Helbig was still the star of Daily Grace and was still partnered with MyDamnChannel. That pact ended at the end of 2013, and Helbig was forced to rebuild her audience on a new channel. She’s pulled it off and then some; her new YouTube home now has more subscribers than her old one ever did, and she’s written book, acted in movies, and even launched her own jewelry line (with her dog). DeStorm Power is still an online video star, but his work now expands far beyond YouTube. Notably, he made the smart decision to recognize Facebook’s growing emphasis on video and has since posted a lot of content there, including his Streamy-winning series Caught. Even so, he gets plenty of views no matter where he shares his work. Chalk one up for platform agnosticity.

These days, fresh uploads are rare on Joe Penna’s channel, but YouTube’s favorite sunglasses-clad musician seems to be keeping plenty busy. Last we heard, he was at work on his first film, which will star Mads Mikkelsen. Dave Days plays to a much smaller YouTube audience now than he did in 2012, but his voice retains its crisp, boyish tone to it. As I see it, he’ll long be remembered as the guy who helped Rebecca Black bring “Saturday” to the internet masses.

Peter Chao’s comedic vlogs about Asian stereotypes led him to YouTube stardom, but in a recent video, he explained that the video site’s current monetization climate makes its profit margins slim. He has moved on to acting, recently booking a role in a Nintendo Switch commercial.

In 2012, Annoying Orange seemed like a juggernaut of family entertainment, receiving millions of views per video. Like many other creators on this list, Dane Boedigheimer’s average audience has dipped, but he still gets plenty of laughs when he dishes out his latest fruit puns. These days, unfortunately, he seems to be upstaged by another annoying orange.

Freddie Wong’s hub of splashy, effects-laden sketches was known as Freddiew then, even though it represented the joint output of Wong and collaborator Brandon Laatsch. Since 2013, Laatsch has worked on his own stuff, while Wong has gone on to launch a Hulu anthology series called Dimension 404.

Ian Hecox and Anthony Padilla spent more than a decade as perhaps the most dynamic duo on YouTube. Padilla’s doing his own thing now, but Hecox continues to lead the Smosh brand, which has put together a longer run of sustained popularity than any other YouTube channel.

While many creators featured in YouTube Rewind 2012 have seen their audiences shrink over the past five years, Rhett McLaughlin and Link Neal’s shared cachet has only risen. Their Good Mythical Morning show has been souped up with the help of YouTube, and their YouTube Red series Buddy System just started its second season. As far as we known, they’re still best friends. When YouTube Rewind 2012 came out, The Guild was just finishing up its six-season run as a groundbreaking web series; now, in a testament to its cultural relevance, it has been enshrined in the Smithsonian. The YouTube channel Day founded, Geek & Sundry, now features voices other than her own, though she’s keeping plenty busy as the voice of a mad scientist on Netflix’s reboot of Mystery Science Theater 3000. As announced last month, a second season of that show is in the works.

Chester See’s YouTube Rewind 2012 role was that of a guitar-strumming heartthrob. It’s a description that still suits him in 2017, given his continued tendency to release crooning ballads. As his latest video shows, he can count Zac Efron, Hugh Jackman, and Zendaya among his fans.

A decade after she first broke down her 300-page iPhone bill, Justine Ezarik is still going strong with tech videos, collaborations, and vlogs. Across all that time, her upload schedule has remained remarkably regular and consistent. Her career spans more than 1,500 videos, making her one of the ultimate ironwomen of the YouTube world. Hannah Hart still gets drunk in her kitchen from time to time, but she’s expanded the breadth of her channel enormously over the past five years. She’s now known for vlogs, collaborations, and her LGBTQ advocacy, the last of which has landed her on the board of GLAAD.

The two Epic Meal Time cast members who hurled bacon at Felicia Day in YouTube Rewind 2012, Josh Elkin and Dave Heuff, no longer appear in the channel’s videos, but the Sauce Boss continues to swagger on. Harley Morenstein has eaten an uncountable number of bacon strips as part of his experiments in over-the-top cuisine, but that hasn’t stopped him from concocting weekly, supersized meals to satisfy his YouTube viewers.

Remember this show? Kyle Humphrey and Graydon Sheppard’s web series inspired an ubiquitous meme of 2012 as creators rushed to humorously depict the common behaviors associated with various ethnicities, genders, professions, and other groups. Four years later, Humphrey and Sheppard re-teamed for a CBC web series called Coming In. Sheppard lost the wig for that one.

Like Smosh, Jenna Mourey has put together a remarkable YouTube career. She’s been one of the internet’s most popular creators for more than a decade, has attracted more than 17 million subscribers, and has entertained a generation of young women. You can still find new videos on channel every single Wednesday, and she doesn’t appear to be slowing down anytime soon.

Oh yeah, and this guy is still going strong, too. Higa, who launched his YouTube channel in 2006 as a 16-year-old, still gets millions of views every time he posts a video. Digital trends have risen and fallen, but Higa remains a consistent source of parodies, fake trailers, and other funny videos. Here’s hoping that, when we look back at YouTube Rewind 2012 five years from now, Higa is still cranking out the hits.

[Editor’s note: Four other channels — GloZell, Blair Fowler, ClevverTV, and Smosh Games — had short appearances in YouTube Rewind 2012. They were billed in the video with a “with” credit. So we’ve kinda billed them here that way, too. Five years later, they all continue to boast sizable viewership.]