BuzzFeed’s ‘Worth It’ Changes The Face Of Food Criticism, One Price Point At A Time 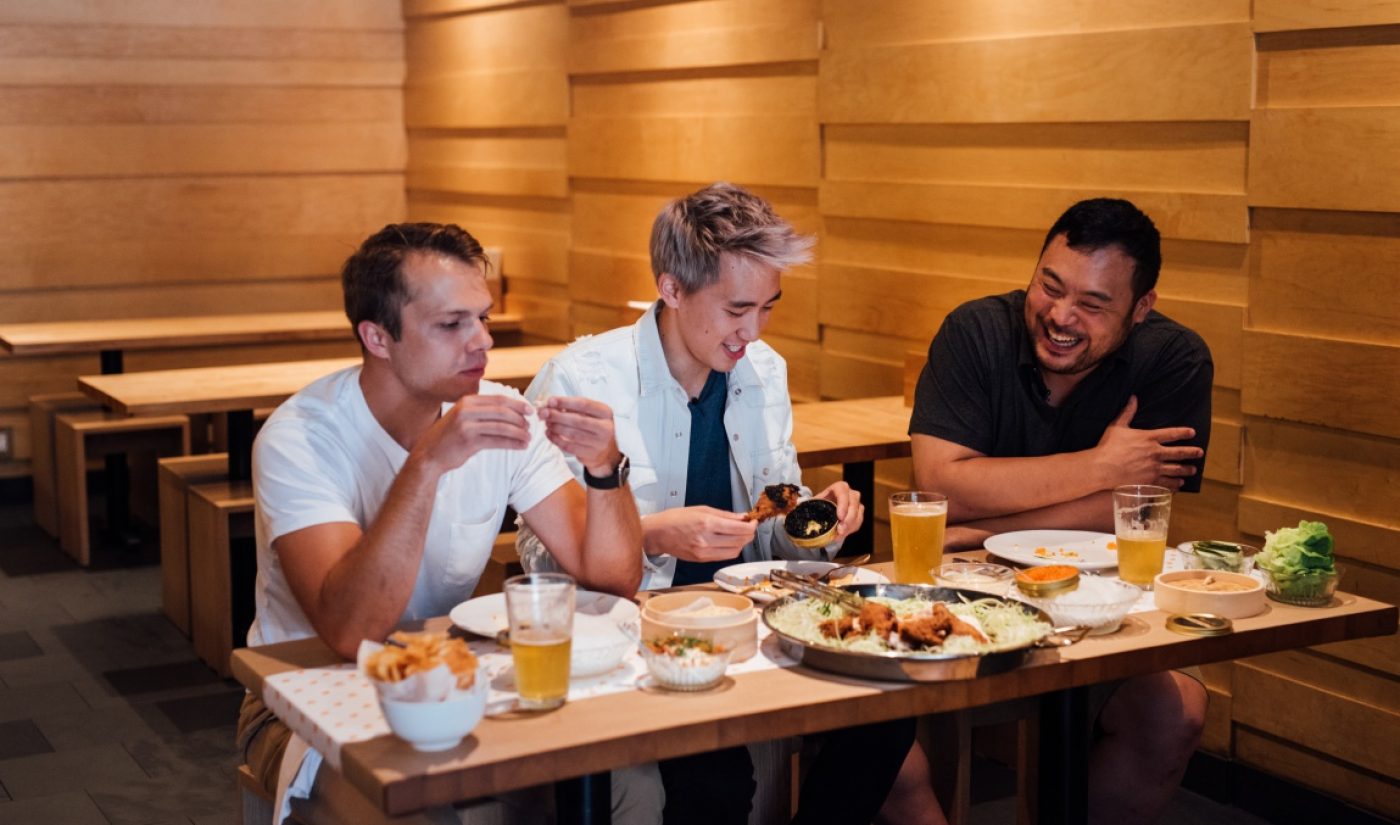 It’s just past 9 AM on a blistering July morning in New York City, and Momofuku Noodle Bar has prepared a feast. On a wooden table sits two chickens, fried whole; a tin of bright orange trout roe, and another filled with inky black caviar; delicate crepes steaming in a basket; several homemade sauces; and, despite the early hour, three tall glasses of beer.

Midway through the meal, celebrity chef David Chang — the mastermind behind Momofuku and the host of the morning’s festivities — decides to bring out a special treat. He has his kitchen provide another type of caviar, this one contained in a vessel that is less of a tin and more of a drum. He will invite his guests to dunk chicken drumsticks directly into this kilogram of fish eggs, creating a food combination that reaches comical levels of indulgence .

Normally, this sort of spread would cost at least $500, but today it’s on the house, because Chang wants to impress his guests. They are Andrew Ilnyckyj and Steven Lim, and they are the hosts of Worth It, an astoundingly popular BuzzFeed web series. In addition to the expensive cornucopia Momofuku has prepared for them, Ilnyckyj and Lim will also try cheap and moderately-priced fried chicken dishes at two other NYC restaurants. Ultimately, in an episode that arrives on the BuzzFeed YouTube channel on October 1, they will each name one version of the comforting classic as their “Worth It winner.” Chang, as he makes clear, is eager for Momofuku to earn that distinction.

The reverence Chang has for a pair of unassuming twenty-somethings is not surprising given the amount of influence they command. Worth It, produced by the media company BuzzFeed, has received more than 300 million views and more than two billion minutes of watch time. Viewers from around the world flock to the featured restaurants and send their profits skyrocketing. At the 2017 Streamy Awards, Worth It was named the internet’s best food show. Ilnyckyj and Lim’s gastronomical adventures have taken them to Seattle in season one, Korea in season two, and Australia in season three. Along the way, they’ve hobnobbed with culinary big-shots like Chang, Mario Batali, and Marcus Samuelsson, the last of whom competes against Chang in the fried chicken episode.

The secret to Worth It‘s success is its effortless blend of high and low culinary culture. It discusses food with a tone that is both simple enough for a casual YouTube viewer to follow and reverent enough of the expertly-crafted dishes it features. This approach works because of the dynamic between Ilnyckyj and Lim. The former host tends to be more heady in his descriptions of the flavors he consumes, while the latter opts for humbler observations. When Chang feeds Lim a crepe filled with fried chicken and caviar, Lim offers a comparison that focuses on the dish’s superficial appearance. “It’s like a taco,” he says. Chang comments that he’s never thought of it that way, but he likes the juxtaposition. “This is how people eat and this is how people have the conversations about where they want to go,” Chang told Tubefilter, referring to both Worth It‘s relatable level of commentary and the price-based framework of its restaurant reviews.

The compelling on-screen rapport between Worth It‘s co-hosts is informed by their respective attitudes and backgrounds. Ilnyckyj and Worth It cameraman Adam Bianchi have also served as producers on Tasty, the BuzzFeed cooking show known for its snappy, shareable video recipes. There, Ilnyckyj drew some influences from TV cooking shows, and as he has spent more time on Worth It, he has become excited about the famous chefs who have professed their love for it.

Lim, on the other hand, made sure to highlight the “corny vlogs” that serve as the interstitial material between Worth It‘s restaurant visits. “We wanted to make sure that people on YouTube could relate to the content we were making and that it fit the audience,” he told Tubefilter. Those everyman elements are important not just to him but to Chang as well. “I see them trying to do something that is useful for a dining public that is younger and more knowledgable than ever before,” the chef told Tubefilter. “When you talk to people that aren’t foodies or are under the age of 25, they know these guys more than any other chef I know.”

Both hosts agree that their opposing approaches to food criticism have helped Worth It become such a big viral hit. “At the end of the day, we want to be relatable to people and keep it in a place where people watching us are joining us at the table,” Lim said. “Even if we go into detail about how something tastes,” Ilnyckyj added, “we still want to live in the reality that we’re just two friends eating together.”

Balanced by its fundamental dynamic, Worth It is now in the midst of its third season, which has so far seen Ilnyckyj and Lim review everything from fried chicken to wine. The two co-hosts aren’t worried, at least not yet, about their format growing stale, because their episodes have so much more to offer beyond their judgements of relative restaurant value. “The stories of the people who make the food are always going to be unique,” Ilnyckyj told Tubefilter. “Even if the middle-tier pizza is like the middle-tier burger in its level of detail, you still get this distinct story of why these people came to cooking and what influenced them to make it a certain way, and I think that focus on why food is made the way it’s made is an important message and the one that will be infinitely tellable.”

Meanwhile, the two young BuzzFeed employees at Worth It‘s center will continue to grow as both hosts and food critics. “We’re living life and growing as human beings, and I think the audience is right there with us,” Lim said.

Ultimately, even if Worth It features indulgent fried chicken dishes and cameos from celebrity chefs, its unpretentious tone is keeping both its stars and its fans happy. “If we were a giant corporate TV show and I had to deal with a shitty director every day,” Ilnyckyj said, “I would probably not enjoy that drumstick quite as much.”