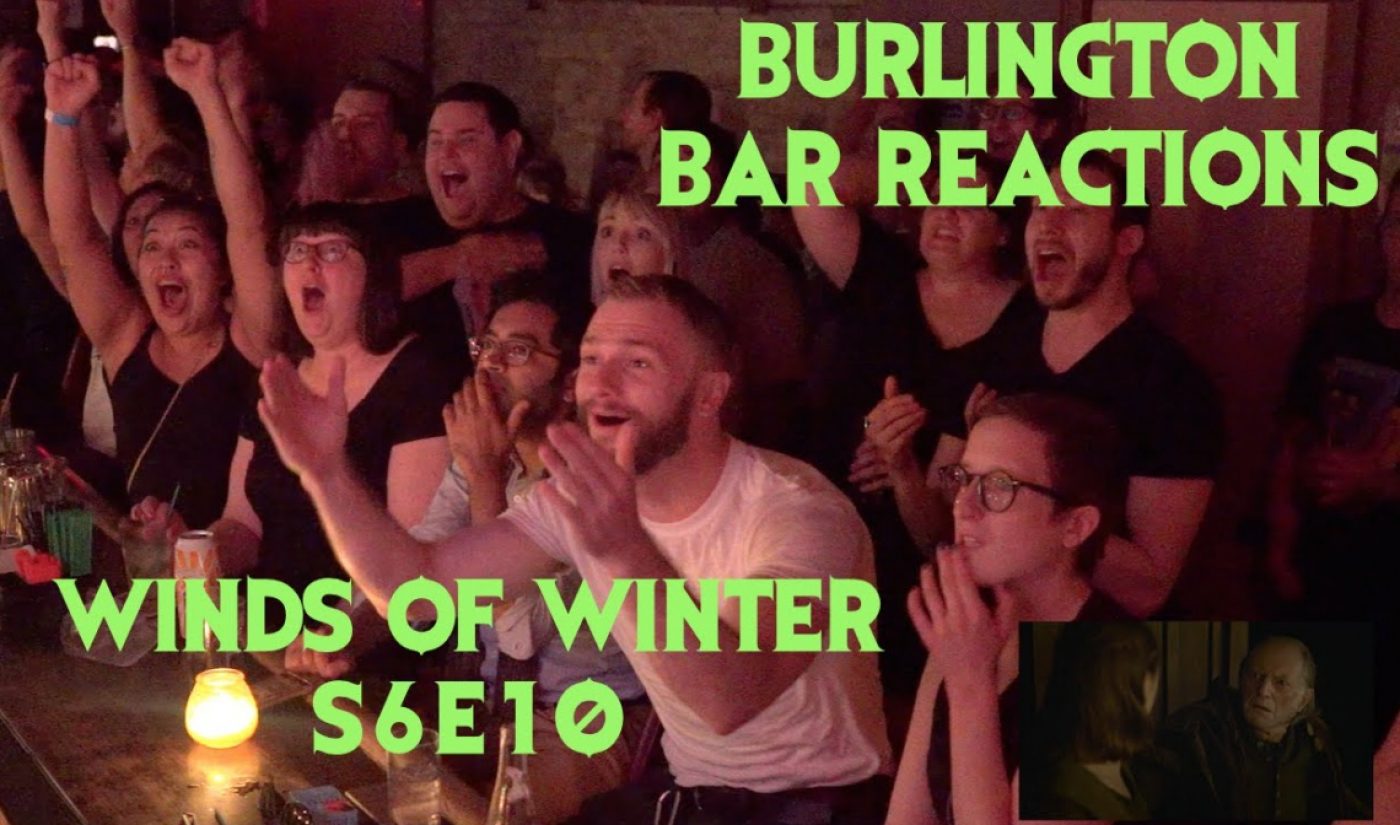 For a handful of Sundays each year, eager patrons pack into the Burlington Bar, a watering hole located in Chicago’s trendy Logan Square neighborhood. For an hour or so of their time, they are captivated by TVs mounted across the establishment. They punctuate their viewership with regular cheers and screams.

The program that has the denizens of the Burlington so transfixed isn’t NFL football; it’s Game of Thrones.

HBO’s fantasy drama is the most popular TV show in the world, and the Burlington is famed for its watch parties, not just in Chicago but on YouTube as well. As patrons take in each week’s spectacle, bartender Sean Loftus records their reactions as they witness betrayals, violence, and melodramatic political intrigue. After the episode airs, he uploads the best of those takes to his Sean TankTop YouTube channel, where they receive hundreds of thousands of views within hours. Some, including a video that features the Burlington’s horrified reaction to the season four duel between Oberyn Martell and Gregor “The Mountain” Clegane — which ends with The Mountain squashing his foe’s head like a grape — have surpassed three million total views.

When Game of Thrones returned for its seventh season last month, Loftus once again resumed sharing his bar’s reactions to the show’s most notable scenes. This time, however, there’s more: on Sean TankTop, there are reviews and vlogs and sketches and other video types, all centered around the insular community of the Burlington and its relationship with Game of Thrones.

Previously, Tyrion, Arya, and Jon Snow were the stars of Loftus’ channel. Now, they’ve been joined by “The SJW-ettes,” “Captain America,” “Hawaiian Shirt Guy,” and all the other Burlington regulars whose reactions have made them fan favorites and have helped Loftus take his channel beyond Game of Thrones reactions.

During season three of Game of Thrones, which aired in 2013, Loftus would celebrate the ends of his Sunday shifts by watching new episodes on the Burlington’s TVs. From there, he had the idea to move his viewership to the hours when he was still on the clock.

“Sundays are usually a slow night in the bar business unless you have something that gets people to want to come out,” he told Tubefilter.

It didn’t take long for him to begin posting the Burlington’s reaction videos, which first arrived on YouTube during season four. Loftus, using a handheld camera chose to pan across his bar in order to capture a panorama of emotion. “I have a couple of cameras that do exceptionally well in low light that I can maneuver around and get these reactions where there’s a certain level of authenticity that is lost in most other reaction channels,”he said. “It’’s a really funny or fun kind of electric energy that’s in the bar when the shit starts going down and I think that’s the appeal.”

When Loftus refers to “most other reaction channels,” he’s describing a massive YouTube community that has generated controversy for the way in which it appropriates popular material. Popular “reactors,” as they’re known, will sometimes sit in silence for minutes at a time while the video they are “reacting” to streams in a small corner of the screen. Occasionally, they will punctuate their personal viewing experience with loud exclamations that add little substance or commentary. Loftus isn’t interested in that subgenre of reaction videos. He is well aware that his clips require personality in order to go beyond hollow attempts to benefit from the popularity of someone else’s content.

“If it’s just some 18-year-old kid who turns on his laptop camera and you know he sitting there and and seemingly kind of hamming it up and talking to the camera there something a little forced about that, at least in my opinion,” he said. “Nothing against any of them, but I know it creeps me out.”

You can draw a direct line from Loftus’ desire for personality in his videos to the new types of content that have popped up on his channel during season seven. In addition to his typical reaction videos, which, at more than 10 minutes each, are longer than ever, he has also shared some of his own Thrones thoughts in a review series called List of the Drunk Man, collaborated with another popular Game of Thrones reaction channel called The Normies, and brought in some of his regulars for a segment called The Watchers In The Bar.

It is the last of those formats that best speaks to the Burlington’s unique character among reaction channels.

In most cases, viewers are drawn to reaction videos because they like the content being reacted to and want to witness as someone else experiences it for the first time. In Loftus’ videos, however, the reactors are increasingly becoming as popular as the heroes and villains of Westeros. When a regular patron, the aforementioned “Hawaiian Shirt Guy,” did not appear in the first reaction video of season seven, many fans left comments asking after him. Thousands more approved these comments by conferring a “thumbs up” on them.

Loftus realized that he had an opportunity to build a valuable community through his YouTube videos.

“I’m a filmmaker myself and I’ve dabbled in vlogging and that type of stuff before,” he told Tubefilter. “And once I saw our subscriptions to the channel got into the pretty large numbers and without really hocking or promoting the channel at all, I thought that it could be a real opportunity to give people more of things that I already know. I have funny, dope ass friends who love to nerd out and have really unique takes on this show and so it just seemed like a natural fit to start doing [Watchers In The Bar].”

Although all these videos use snippets of the previous week’s Game of Thrones episode, the series’ showrunners have given Loftus their blessing, even though HBO has been known to crack down on watch parties in the past. Some other Game of Thrones reaction channels have installed a “fair use timer” in order to count out the length of copyrighted footage they display. The hope is that, by being sparing in the use of this footage, they can comply with the Digital Millennium Copyright Act, which prohibits the repurposing of copyrighted material but makes exceptions for content that falls under the category of “fair use.”

Loftus explained his relationship with the premium cable network to us:

“I was actually sent an amazing little care package from the show runners David Benioff and D.B. Weiss. It had some t-shirts and a signed poster and all that stuff, and it was it was pretty insane to think that they would know who we were or know about the channel but at the same time I totally understand it. In their email they said that a bunch of the cast knows about the channel and they watch it and a lot of the writing staff watch them every week. Which kind of makes sense because it’s almost like a chef getting to watch people enjoy the meal that they prepared. I’m sure HBO corporate is another thing entirely. There’s some old guy in a suit, you know, with his arms crossed, shaking his head, but at least the creators of the show have reached out to us and they seem to dig the shit out of it.”

Game of Thrones’ next season, its eighth, will be its last, and the question of what Loftus and the Burlington will do after their favorite show ends remains tentatively unanswered. The bar has hosted watch parties for some other shows, none of which have commanded anything close to the audience Thrones has brought in. While YouTube viewers often request videos related to other programs, and while Loftus wants to expand his reviews to other programs and movies, he believes Thrones will continue to make up a big part of his digital presence even after it is no longer airing new episodes.

“I know that a core group of the regulars are very interested in going back and discussing previous Thrones episodes just because we love it so much and because we have such a good time making those videos,” Loftus said. “That’s kind of what this latest push of new content has all been about. It’s about introducing myself and the regulars to the viewers that we’ve managed to build over the years.”

We won’t know until 2018 (at the earliest) whether the Burlington Bar can still attract a YouTube audience without new Game of Thrones episodes to react to. In the meantime, Loftus will be plenty busy.

Thrones watch parties at his bar can attract up to 80 people per episode, some of whom come in from across the world to check out the YouTube-famous dive. The list of countries that have been represented at the Burlington include Italy, Sweden, Brazil, and Honduras.

And then, when the lights come up, those patrons will find themselves on YouTube, courtesy of Loftus and his furtive video camera. The bartender is hoping that viewers who appreciate his reactions and the other content on his channel will help him out so that he can make more. Among other initaitives, he just launched a Patreon page, on which his fans can offer him financial support. If you want to chip in, you can do so by clicking here.