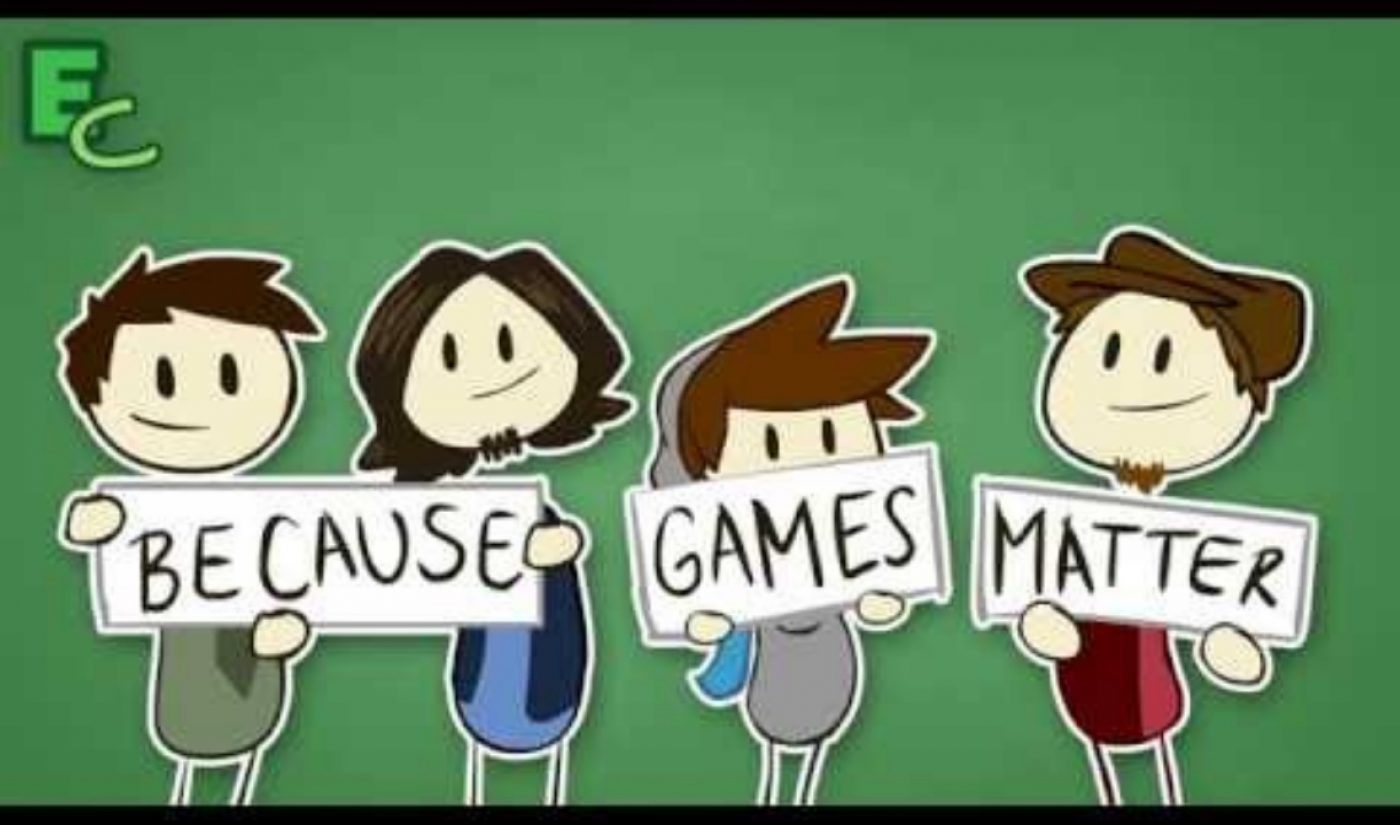 An explosion of educational content has turned YouTube into a place where you can learn a thing or two, and Extra Credits is one of the channels contributing to that trend. For close to a decade, co-creators James Portnow and Daniel Floyd have delivered essays about video game design, through which they have shown their fans why “games matter.” In addition, a series of world history videos, made with care and thoroughness, have taken the channel to another level. Now that it is over one million subscribers, we got some quotes about its current state.

Extra Credits: It’s great. It’s something we most literally couldn’t have done without them. Most of all though we want to say thank you. More than anything we say on the channel the important part is them going out and continuing the dialogue with friends, parents, loved ones. This is their celebration as much as it is ours.

TF: Extra Credits has appeared on several different platforms during its run. What do you see as the advantages and disadvantages of YouTube as a distribution platform?

EC: YouTube gives us total control of our content. We can do crazy things like putting history on a gaming channel! Of course visibility is a problem in a space as crowded as YouTube but we’ve been very fortunate that our fans continue to spread the word.

EC: Engagement. Before you can teach anything you have to get people listening. In a world where education has to compete with video games and television and film, educational content has to be as engaging as any of those things. And it can be. Human curiosity is an amazing thing. For creators of the future, I’d just say that everyone should love to learn, and we can help bring that.

TF: Why did you initially decide to use the distinctive voice modulation for which Extra Credits is now known?

EC: Way before he worked at Pixar or joined the game industry, Dan was a student at Savannah College of Art and Design. For his senior project he decided to make a video out of one of the articles James wrote. It being an animation school, the project had to be exactly 10 minutes long. It being college, the project was being done at 4am the day before it was due. It came in at just over 10 minutes and he was going to redo the whole thing. Then he realized that he could just speed it up (which also shifts the audio pitch up), hit his mark exactly, and still get two hours of sleep. Thus Extra Credits was born.

TF: Do you think that a keen understanding of game design can be applied to help understand everyday situations? Why or why not?

EC: There are two answers. First is that so much of our modern world is just a series of complex interlocking systems, the very thing we try to parse when making or even playing games.

But the second answer is perhaps more interesting. Game design isn’t about the “game” part, it’s about the “design” part. It’s a way of looking at the world. Game design is about crafting experiences and to be able to do that you really have to take life in.

It’s amazing how much we miss in our fast-paced world. Next time you’re in a class or at the office, close your eyes and try to remember exactly what the people next to you were wearing. How close did you get? How much did you miss because you were busy attending to other things?

This lens for the world, coupled with a conscious attempt to understand it (when you’re at a concert or riding on a ride at an amusement park, ask yourself “how did that affect me,” “why did that affect me the way it did,” because that’s game design) can give us a powerful tool for examining our life and the times we live in.

TF: What do you think will be the most interesting development that will occur in the video game industry over the next five years?

EC: This is always a good way to stick one’s foot in one’s mouth, but I’m interested in “AR” or augmented reality. I think Pokemon Go showed us just how powerful a thing it is to get us outside and playing in the real world. In the next five years I hope we build on that and present much more engaging experiences that get us to explore parks and find the wonders hidden in the cities we live in.

TF: How much research work goes into the average Extra Credits video?

EC: Too much. I like research, I think that’s part of being a game designer, so I’ll often go on tangents and then double back. One of the most fun things for me about this show is just how much I get to learn.

TF: Where do you get ideas for your history videos?

EC: Actually these are almost entirely chosen by our Patrons. We wanted to do a show that wasn’t about what we thought was important in history but rather what our audience wanted to learn.

EC: Oh yes…we’d love to spin up a few new shows. I wish I could talk about it now but I want to make sure they’ll work before I say anything. Check back in three months though and I’ll tell you all about it.