Coins, Bars, And Beyond: A Beginner’s Guide To The Lucrative Livestreaming Economy 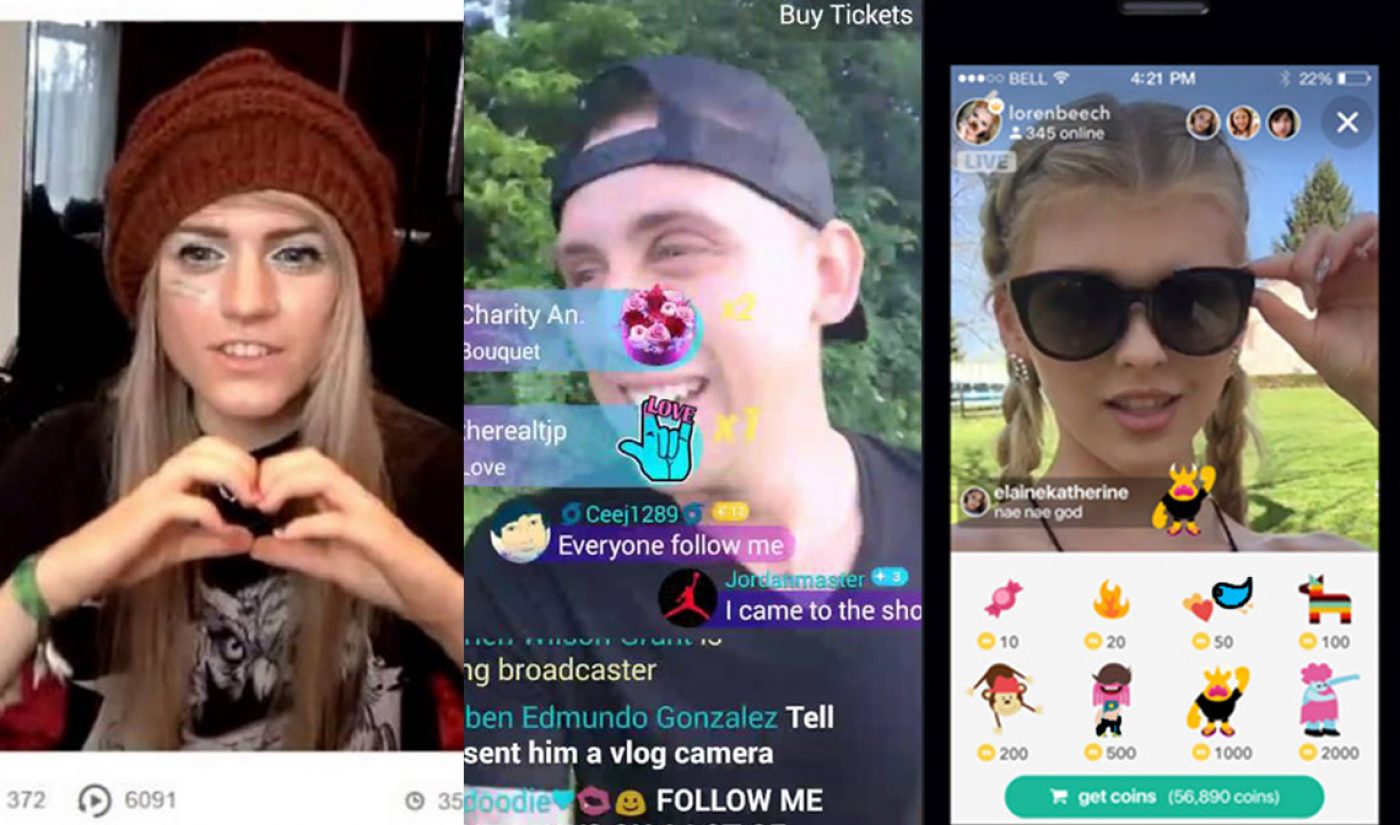 By the year 2021, the livestreaming industry will reportedly be a $70 billion business. And while many of the first and biggest platforms within the space – such as Periscope and Facebook Live – are still piloting monetization models for creators, a crop of both established and emerging platforms — including Live.ly, Live.me, YouNow, YouTube, and Twitch — are facilitating serious money-making prospects through newfangled virtual currency paradigms.

From bars to coins to diamonds and gifts, the ways in which money is transacted across these platforms — and how creators get paid — can get complicated, so we’ve broken it down. On every streaming platform, for instance, it’s worth mentioning that the Apple and Google app stores take a 30% cut of each in-app transaction (though purchases made on desktops aren’t subject to these fees). The platforms themselves then take a cut, with creators banking the rest.

Today, the livestreaming medium has taken on many forms, including musical performances, gaming walkthroughs, eating shows, virtual sleepovers, or straightforward dialoguing with fans. Whether you’re an aspiring streamer scoping out the scene or a loyal viewer wondering how to support your favorite broadcaster, check out our guide to the bustling livestreaming economy (listed in alphabetical order) right here:

Live.ly, which launched on the heels of sister app Muscal.ly in June, said its 10 most popular broadcasters made a total of $46,000 over a two-week period last fall. Today, its top 20 creators reportedly take home $31,000 on average every month.

While Musical.ly and Live.ly have birthed their own batch of homegrown influencers, including ‘Baby’ Ariel Martin and Jacob Sartorious, digital veterans like YouTube’s Bart Baker have also found massive success on the platforms. Last fall, Baker says that within his first dozen or so Live.ly streams, he was clocking six-digit viewcounts and roughly $30,000 in revenue.

Last November, in addition to enabling viewers to give gifts during streams, Live.ly added the ability for broadcasters to receive gifts directly on their personal profile pages.

Live.me’s monetization structure operates on a system where viewers can convert money into a virtual currency called ‘Coins’ that they can use to buy ‘Gifts’ for their favorite streamers. Each Gift is worth a certain number of ‘Diamonds’, which creators can then cash out for actual money. Payments are tendered by Live.me to creators through Paypal, and broadcasters can cash out a maximum of $600 per day.

While Coins can be acquired by users for free — by referring friends to download the Live.me app, for instance — they are most frequently purchased. In the U.S., 69 Coins can cost roughly $0.99. There are many different Gifts that Coins can buy, which, when sent to broadcasters, appear within streams in the form of animated stickers, while the accompanying Diamonds are deposited into recipients’ accounts.

Once a creator has amassed 40,000 diamonds, they are eligible for payout — with 40,000 diamonds being roughly equivalent to $200. Check out a gift-giving tutorial from Live.me right here:

Last fall, Live.me — which is made by Chinese mobile giant Cheetah Mobile — said it had paid out a total of $1 million to creators through its virtual gifting system. And a quick glance at the Diamond leadership boards within the app shows that top creators are making serious bank — in some cases as much $15,000 per month. That said, creators don’t necessarily cash out all of their Diamonds — many redistribute them during broadcasts as an incentive to keep fans watching or as gestures of gratitude.

In October, Live.me launched another monetization opportunity for creators with Shop.me, wherein viewers can buy merchandise — including T-shirts, hats, accessories, and music downloads — promoted by their favorite streamers.

You can also check out which broadcasters are performing the best on the platform by checking out our very own Tubefilter Top 50 Live.me Broadcaster rankings right here.

While monetization on Twitch was previously only available to the top 17,000 Partnered creators of the platform’s 2.2 million total unique monthly broadcasters, the company launched an Affiliate Program yesterday that opened up monetization to virtually everyone.

There are lots of different ways to make money on Twitch. Most recently, the company unveiled an updated subscription program, which enables viewers to support creators in either $4.99, $9.99, or $24.99 monthly increments. Subscribers receive perks, including exclusive chats and special ‘Emotes’ — or the small pictures that are utilized within Twitch chat boxes as a unique language. Additionally, Twitch just rolled out ecommerce capabilities, whereby streamers can earn commissions from video games sold on their profile pages.

Partners and Affiliates are also able to make money from advertising — and determine the length and frequency of mid-rolls that appear on their channels. Professional streamers can reportedly make $250 per month for every 100 subscribers via ad revenue alone — on top of between $3,000 and $5,000 per month from subscriptions. Other monetization opportunities for creators include merchandise, revenues from Twitch Prime subscriptions, and sponsored videos.

Finally, Twitch has monetized its Emotes with a feature called ‘Cheering‘. Cheering is a chat message that contains animated jewel Emotes called ‘Bits’. One hundred Bits cost $1.40, and users can tip anywhere from 100 bits (which appears as a grey pyramid) to 10,000 bits (a six-sided red star) in a single message. Since the launch of Cheering last June, the feature has reportedly generated $12 million in total revenue.

On YouNow, fans can purchase ‘Premium Gifts’ for their favorite creators using ‘Bars’, which is the platform’s form of virtual currency. Six different types of Premium Gifts are available (below), including ‘Likes’, ‘Applause’, ‘Tips’, ‘Marriage Proposals,’ and ‘Fan Mail’, and each Gift carries a different monetary value, ranging from less than $1 to $100.

Bars can be purchased by viewers in different packages, though they generally cost 7 to 8 cents apiece. And while any YouNow creator can receive Gifts, only Partnered creators can earn money from them. (Broadcasters can apply to YouNow’s Partner Program right here; the company says it’s looks for creators who stream at least twice a week and boast average concurrent viewership of more than 450 people. There are currently thousands of partnered creators, YouNow says.).

In addition to giving the aforementioned Gifts, YouNow viewers can pay $4.99 per month to subscribe to their favorite channels (creators take home roughly two-thirds of these subscription revenues) — which bestows special profile badges and chatting privileges. YouNow also helps facilitate brand deals between Partnered creators and advertisers, such as a Coca-Cola campaign that ran during last year’s American Music Awards.

All told, YouNow hosts 170,000 live streams every day, with top earners pocketing between $150,000 and $200,000 per year, the company says. Partners are paid at the beginning of every month, and earnings for the month must exceed $75 in order to qualify for payment.

YouTube launched desktop streaming in 2011, and enabled ad monetization for broadcasts in April 2012. Therefore, live streams, which can remain on creators’ channels even after an event has concluded, can be monetized with in-stream ads just like standard YouTube clips.

Today, YouTube is doubling down on live video with the rollout in February of mobile streaming for all creators with at least 10,000 subscribers — and for creators with more than 1,000 subscribers earlier this month. In addition to ad revenue, YouTube is incentivizing livestreaming with a brand new monetization feature known as ‘Super Chats‘, which lets fans pay for comments during broadcasts that are extra visible.

Prices for Super Chats vary depending on the length of the comment and the amount of time that a user wants it to remain onscreen. A green message that’s 150 characters long and lingers for 2 minutes, for instance, costs between $5 and $10, while a red message that’s 350 characters long and lasts for 5 hours is priced at a cool $500. Check out a full Super Chat cost rundown courtesy of YouTube below: At just a few months old, Super Chats have already proven to be substantially lucrative. In a 90-minute Grand Theft Auto V broadcast in January, for instance, the YouTuber Typical Gamer earned close to $4,000. Vlogger Clintus.tv, meanwhile, made close to $900 during a half-hour live stream in Target.