Kevin MacLeod Is The King Of Royalty-Free Music, And Millions Are Listening 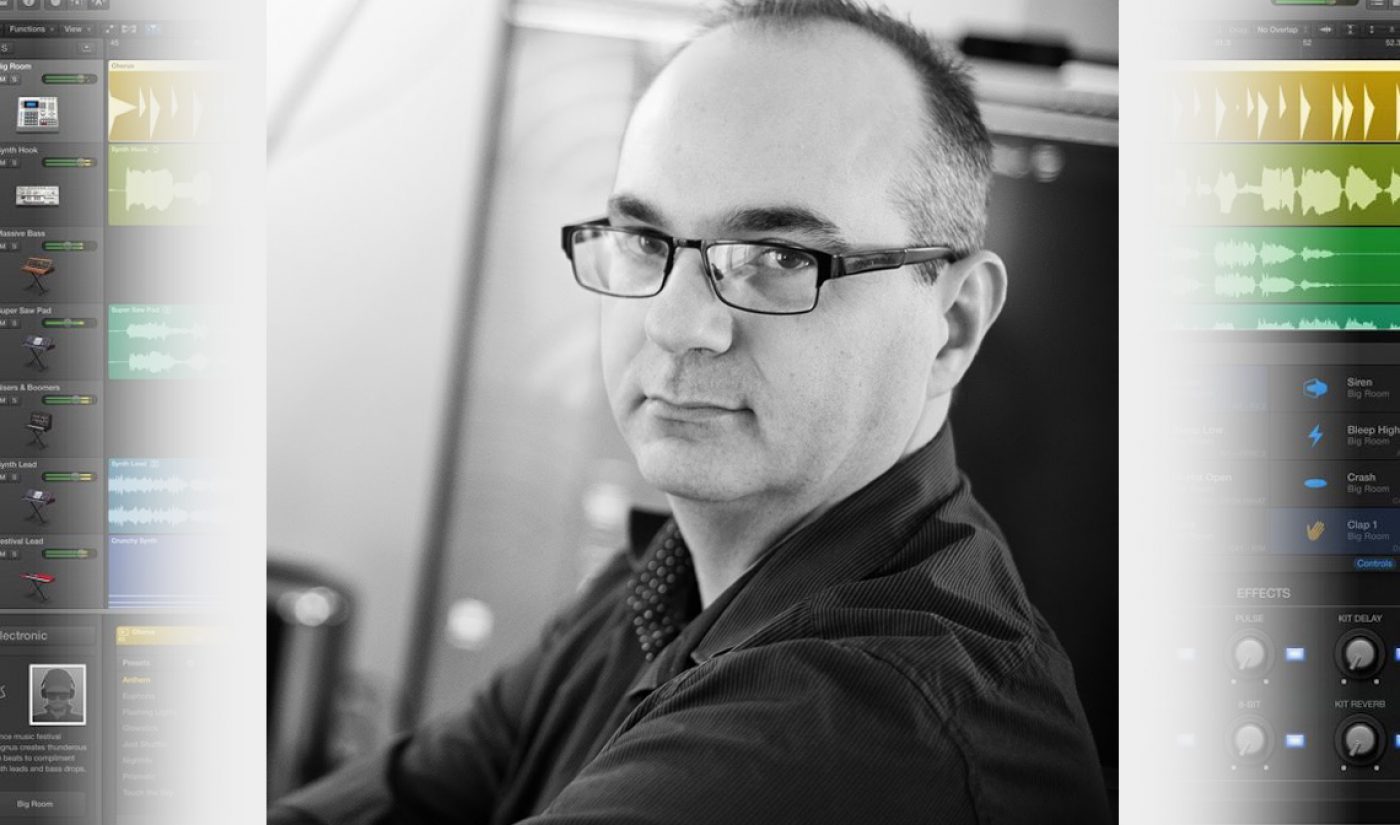 Many Twitch users employ the streaming video platform to share their video game sessions, but if you tune into Kevin MacLeod‘s broadcasts, you won’t see him play Overwatch, or League of Legends, or Minecraft. Instead, you’ll be greeted by the many tabs and displays of the music editing program Logic Pro. In the top right corner of the screen, a small inset displays MacLeod’s face, bespectacled and characterized by thinning hair. Along the bottom of the feed, a scroll reveals a few facts about him. He “loves feeding sheep at the zoo,” says one anecdote. Another tells us he “believes Bohr’s atomic model sucks.” A third provides the most relevant bit of information for a newcomer to MacLeod’s stream: He “has music in millions of videos.”

MacLeod is one of the most prolific composers of royalty-free music, and on Twitch, we get to see him at work. In one broadcast from back in February 2016, he spins his “Wheels of Doom”– which resemble Jimmy Fallon’s “Wheel of Musical Impressions” — to decide the qualities of the tune he will create next. First up is a composition that, according to the parameters dictated by the Wheels, must be short, with pizzicato strings, xylophone, and no percussion.

As soon as the Wheels decide MacLeod’s fate, he springs into action. With almost no hesitation, he find a pizzicato option in Logic Pro and taps out a few jaunty bars on his keyboard. After a few quick revisions, he moves on to the xylophone, for which he writes a short counter-melody. From start to finish, it takes MacLeod only a few minutes to complete his entire composition. Unless you yourself are well-versed in Logic, the only way to keep up with MacLeod’s breakneck pace is to listen to his narration. “This is gonna be a little intro, maybe for someone’s YouTube channel,” he says of his creation. “I don’t know what happens to this stuff after I make it. I just make it.”

Ultimately, no one will get the chance to use that composition at all. At the end of his broadcast, MacLeod tells viewers that he appears to have lost his pizzicato-and-xylophone ditty somewhere within his computer. Luckily, he manages to produce seven more tunes during his three-hour recording session, all based off suggestions from the Wheels, and all of which will join more than 2,000 other tracks in MacLeod’s royalty-free library.

Such is the process of a man whose name you may not have known before now, but whose music, for those who watch a lot of web videos, is inescapable. MacLeod’s library is a valuable part of the YouTube ecosystem, because videomakers can add it to their clips free of charge, so long as they credit the man who composed it. In an environment where major record labels hawkishly patrol YouTube in search of any unauthorized reuse of the music they own, a royalty-free collection like MacLeod’s makes it easy to give a video a soundtrack without having to worry about rights issues.

And yet MacLeod himself is far from a star. He’s just an unassuming guy with a knack for sketching out short musical numbers. Some of them are upbeat, some are gloomy, and many more lie somewhere in between, but most importantly, they are all free to use.

“If I can find a way for more people to hear what I’ve done, I’ve made more of an impact.”

MacLeod, born in 1972 in Green Bay, Wisconsin, told Tubefilter he has “always been in music.” After studying Music Education in college, he became involved in the royalty-free music business during the 90s, when, as he says, it was “a sad industry with a lot of bad music.” TV stations and advertising companies were able to request royalty-free CDs, but MacLeod wanted to serve individuals who couldn’t afford existing packages. “I figured I could do better,” he said.

Thanks to the power of the Internet, MacLeod has been able to assist creators who would otherwise struggle to find and afford cleared music. “I believe that copyright is badly broken, so I chose a license that allows me to to give away the rights I wish to surrender,” he writes in an FAQ on his website. “We really have no hope of overturning the existing copyright situation, but we can and are creating an alternate body of works that are able to compete with them.”

At the same time, MacLeod’s setup also has tangible benefits for him. By giving away his music for free, he is increasing the number of people who hear it, and thus raising his own profile. “If I can find a way for more people to hear what I’ve done, I’ve made more of an impact,” he said during a 2013 session on Reddit’s “Ask Me Anything” forum. “There is no way I would be as popular as I am if I started on the traditional path of charging upfront for music.”

That popularity translates to income through donations and licenses. MacLeod has said he receives daily donations through his website, and sells three different levels of licenses for customers who aren’t able to credit him, such as TV and radio ad producers. He has recently started to solicit support on the fan-funding platform Patreon as well.

“I create music to affect the emotions of other people. The more people I’m able to affect, the better off I am!”

If MacLeod’s goal is to be heard, he is certainly succeeding. His compositions have been used by popular YouTube stars like The Yogscast and h3h3productions, and many MacLeod-scored videos have received millions of views (The clip below is my personal favorite viral video that uses a MacLeod track.)

Each year, he has “hundreds” of interactions with the creators who use his work. “[It] feels like I’ve won!” he says of his music’s popularity. “I create music to affect the emotions of other people. The more people I’m able to affect, the better off I am!”

MacLeod’s music has become so ubiquitous on YouTube that some playlists now label it as “overused.” In MacLeod’s mind, the use of that label is out of his control. “I get it,” he told Tubefilter. “I think ‘Canon in D’ is overused at weddings. It is a quality piece, but you can’t tell people what they should and shouldn’t like.”

No MacLeod creation is as much of an earworm as ‘Scheming Weasel.’ Characterized by a jaunty oboe line and strong snare hits, it is a common choice for light-hearted videos on YouTube. MacLeod has tried to write pieces similar to that one in order to “take the pressure off,” but people still return to their old favorite. “That’s a quirky piece,” he says of ‘Weasel.’ “Most composers don’t write quirky. There’s apparently demand for that style, and not enough music to fit what people want.”

His music hasn’t only been widely proliferated; it has also had an impact on the people who have listened to it. “There are amazing and wonderful uses of my music,” he said during his Ask Me Anything session. “On average, I get a note of something amazing every week or so. Helping to get through cancer treatments, working with dementia patients. There are just some amazing stories, and I’m happy that I know about them.”

MacLeod’s music may be everywhere on YouTube, but he still has plenty of work to do. He describes his main inspiration as “boredom,” and he admits there are some genres, such as Indian music and jazz, that he has struggled to accurately capture. In 2016, he is on pace to create about 100 pieces for his library, plus additional ones for specific clients.

As he continues to produce more work, however, he must deal with a changing industry. He has encountered some issues with YouTube’s Content ID system, and he believes machines will eventually usurp his job. “The future of what I’m doing from a product point of view will sunset in about 11 years,” he told Tubefilter. “After that the AI will take over for most applications.”

Until then, MacLeod will continue to create, and he will continue to share his adventures in royalty-free music on Twitch. “Like everything in my life, there isn’t really a goal,” he says of his broadcasts, applying them to his work at large. “Just explore, experiment, and see what happens.”