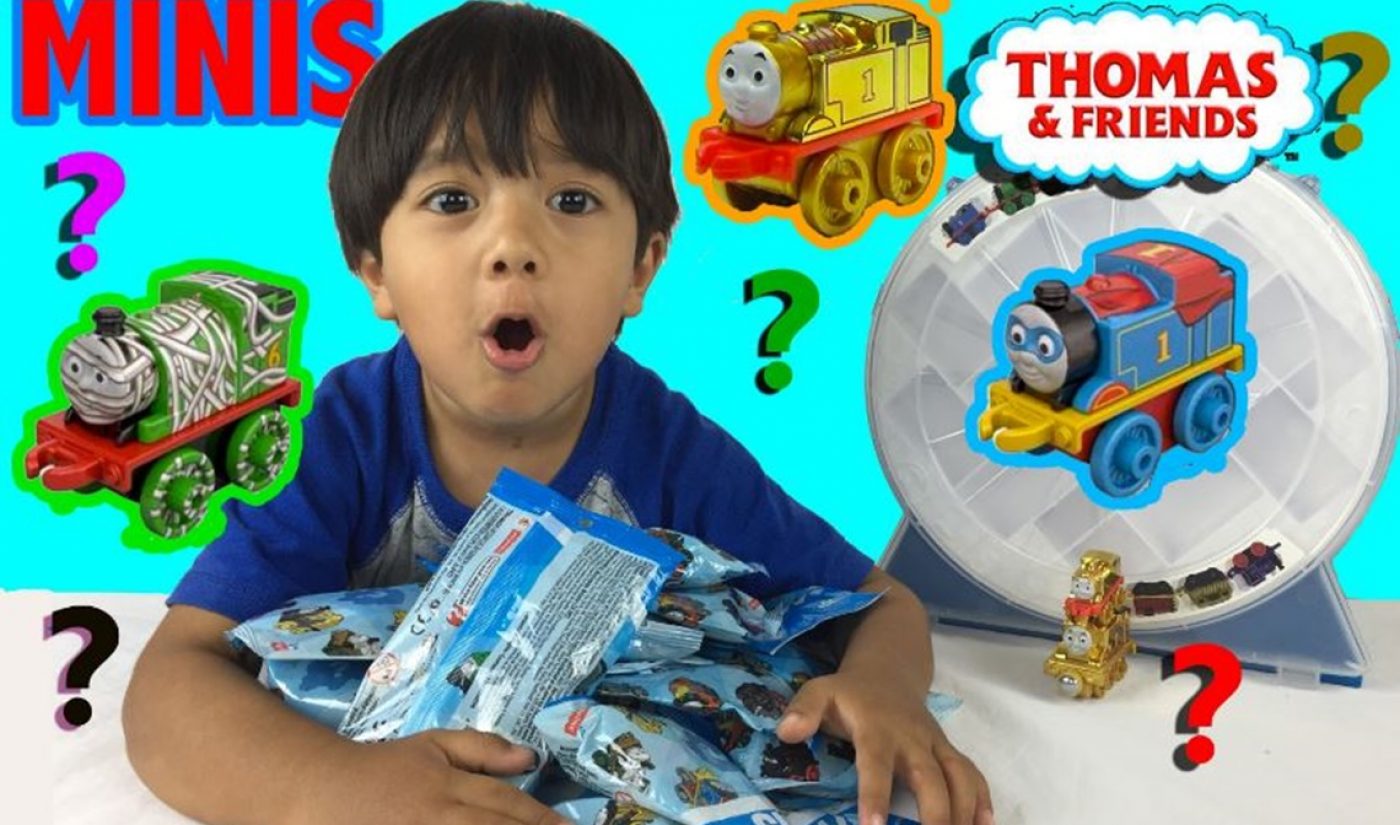 PewDiePie and Justin Bieber (and every other online video creator in the world) have nothing on a charismatic four-year-old with a propensity for Disney Cars and Thomas The Tank Engine.

PewDiePie, YouTube’s most-viewed and most-subscribed star of all-time, and Bieber, another digital goliath who was seeing unbelievable views even months after the release of his latest studio album Purpose, have both been eclipsed by nascent channel Ryan ToysReview at the top of our Tubefilter charts — which track the world’s most-viewed channels on a weekly and monthly basis with data provided by OpenSlate. Having teetered at the top of these charts since last November, four-year-old Ryan — who has emerged as a standout within the humongously popular children’s toy unboxing space — currently resides as YouTube’s most-watched channel in the world, with more than 585.3 million views in July alone.

What makes this feat even more stunning is the fact that Ryan ToysReview, which boasts a relatively straightforward premise and homespun production values, was established just over one year ago. Since March 2015, Ryan has amassed more than 4 million subscribers and over 6.5 billion lifetime views. We spoke with Ryan’s parents — who wished to remain anonymous — about why they decided to start making videos, how they’ve spun the pastime into a full-fledged family business, and what Ryan makes of his new-found viral fame. Check out the interview, which has been condensed and edited for clarity, below:

Tubefilter: What inspired you to start the Ryan ToysReview channel?

Mom: Ryan was watching a lot of toy review channels — some of his favorites are EvanTubeHD and Hulyan Maya — because they used to make a lot of videos about Thomas The Tank Engine, and Ryan was super into Thomas. One day, he asked me, ‘How come I’m not on YouTube when all the other kids are?’ So we just decided — yeah, we can do that. Then, we took him to the store to get his very first toy — I think it was a lego train set — and it all started from there.

Dad: Another reason we started is because Ryan has a lot of extended family outside of the U.S., so YouTube was a great way to share childhood memories with them. It’s also a great way for us to spend more time together as a family and to bond with him.

TF: At what point did you realize that you had a viral phenomenon on your hands?

Dad: About four months after we started, we began to see a serious spike in viewership, and, after that point, views started doubling month after month. Our largest demographic is children aged three to seven years old. Most of our viewers are in the U.S., but Ryan also has a sizable following in the U.K. and in the Philippines.

The most popular video on our channel, titled 100+ cars toys GIANT EGG SURPRISE OPENING Disney Pixar Lightning McQueen kids video Ryan ToysReview (below), has about 480 million views. I don’t know why so many people love that video — if I did, I’d make a lot more just like it. What we’ve also noticed is that that video is carrying a lot of the traffic flow to the rest of the channel.

TF: Has this become a family business?

Mom: I was a high school chemistry teacher and my husband is a structural engineer, but I left my job to focus on the channel full-time. We had no prior experience on YouTube — I’d never uploaded a video in my life — and we’ve learned everything as we’re going.

We post a new video every day, and we typically film two to three videos at a time two to three times per week. We try not to interfere with Ryan’s pre-pre-school schedule, so a majority of the filming takes place during the weekend, and then we’ll edit while he’s in school.

TF: How do you determine which toys to feature?

Dad: Disney Cars and Thomas The Tank Engine were the main brands we were focused on when we first started because we noticed that those were keywords on a lot of other popular videos. But now, it’s mainly what Ryan wants to do. When we go to the toy store, we ask him what he wants to play with, and we let him guide us.

Recently, we’ve started to get into the business of branded videos, but 99% of the videos on our channel aren’t branded. And we pay for all of the toys that Ryan reviews ourselves.

TF: You must have a ton of toys.

TF: What does Ryan make of all that he’s accomplished thus far?

Dad: He’s only four, so he doesn’t fully understand everything yet. But when we’re out in public — either at a toy store or Target or grocery shopping — people recognize him and he gets very excited. He thinks they’re his friends and he wants to play with them.

Mom: Right now, he loves making videos. Every time I tell him we’re going to film, he gets so excited. As long as he’s loving it and it doesn’t disrupt his daily routine, we plan on continuing. But the moment he’s not having fun any more, that’s when it will be time to stop.