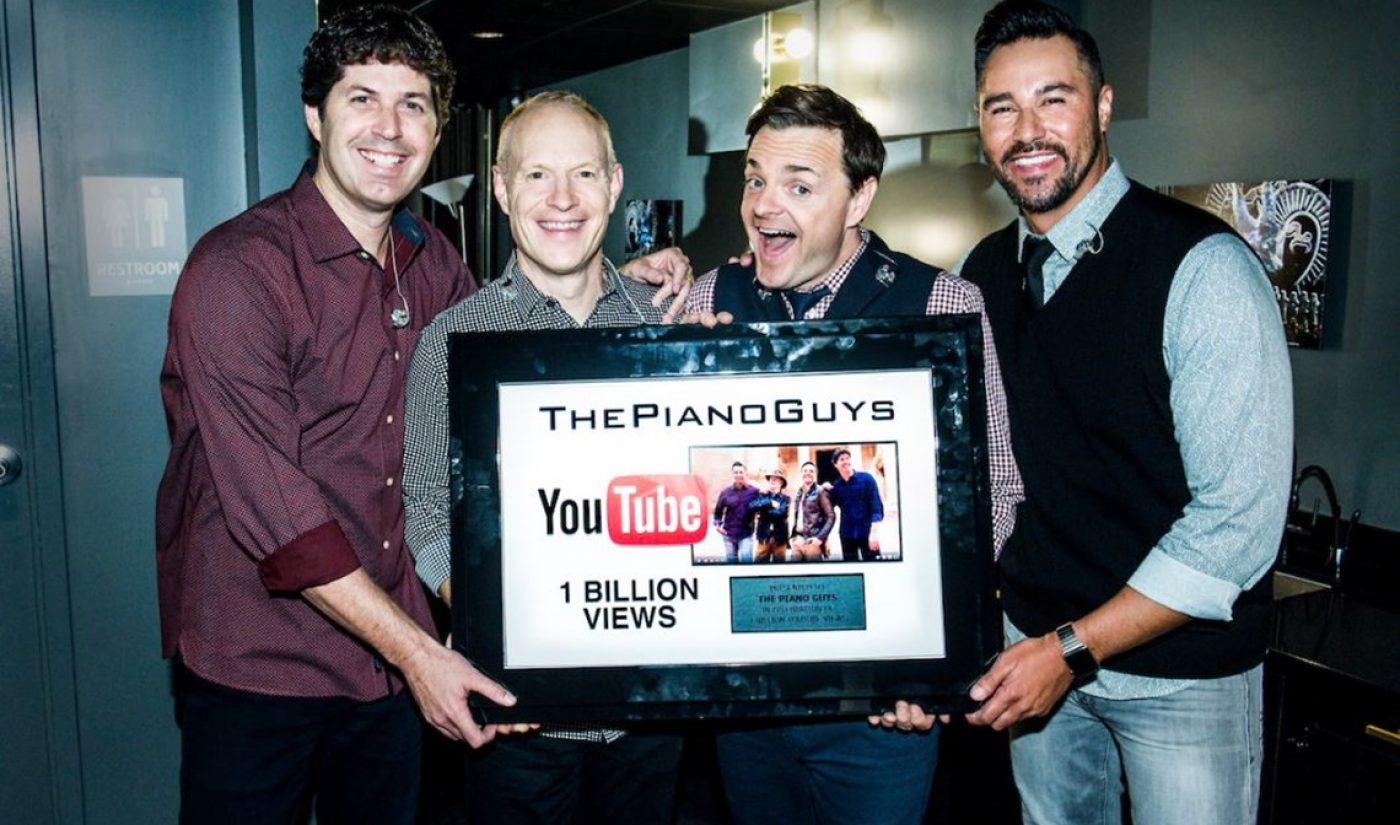 The Piano Guys, one of YouTube’s most successful homegrown music channels, is singing a celebratory tune today, as the four Utah-based dads have surpassed a skyscraping milestone — more than 1 billion lifetime views.

The group — consisting of pianist Jon Schmidt, cellist Steven Sharp Nelson, videographer Paul Anderson, and studio engineer Al Van Der Beek — launched their channel back in 2008, and today it counts a total of roughly 5 million subscribers and 60 uploads. The guys are best known for their sweeping instrumental covers of pop hits mashed up with classics. (One of their latest compositions, for instance, weaves together Mozart’s Lacrimosa and Adele’s Hello). And the music is complemented by equally epic videos — set everywhere from Chichen Itza to the Scottish Highlands. The guys are currently endeavoring to film amidst each of The Seven Wonders of the World — and have already checked four sites off of that list.

“We are overwhelmed with gratitude,” the group told Tubefilter of their accomplishment. “We feel like there have been so many miracles to make this possible that we are simply along for the ride. Behind every view is someone that has spent their time and sometimes their hard-earned money in support of us.” As the guys are currently on tour, they said that they opted to celebrate the billionth view “the best way we know how — by thanking our audience personally.” At a show over the weekend in Los Angeles, YouTube presented the guys with a special commemorative plaque.

Reaching 1 billion views means that The Piano Guys join an illustrious circle of traditional artists who have clocked the same feat, including Adele, Bruno Mars, and Beyonce. The fact that they have accomplished as much being classical artists is all the more indicative of YouTube’s uniqueness as a medium.

The Piano Guys experienced one of the first big breaks on their channel back in 2011 with Michael [Jackson] Meets Mozart, which was their first video to receive one million daily views. In 2014, a Let It Go cover from Frozen mashed up with Vivaldi led the channel to gain 17,000 subscribers and 2.3 million views in a single day. Their most popular video of all time is a cover of Christina Perri’s A Thousand Years (below), with 74 million views.

Looking ahead to the next billion views, the guys say that the primary challenge “is striking a balance between consistency and novelty. We want to keep our audience guessing as to how we’re going to wow them next; and, as technology and social media changes, we want to be on the crest of that wave.” While they promise that more albums and videos are on the way, the most important priority, they say, is “producing visual music that sparks the imagination and lifts someone’s spirit every day.”