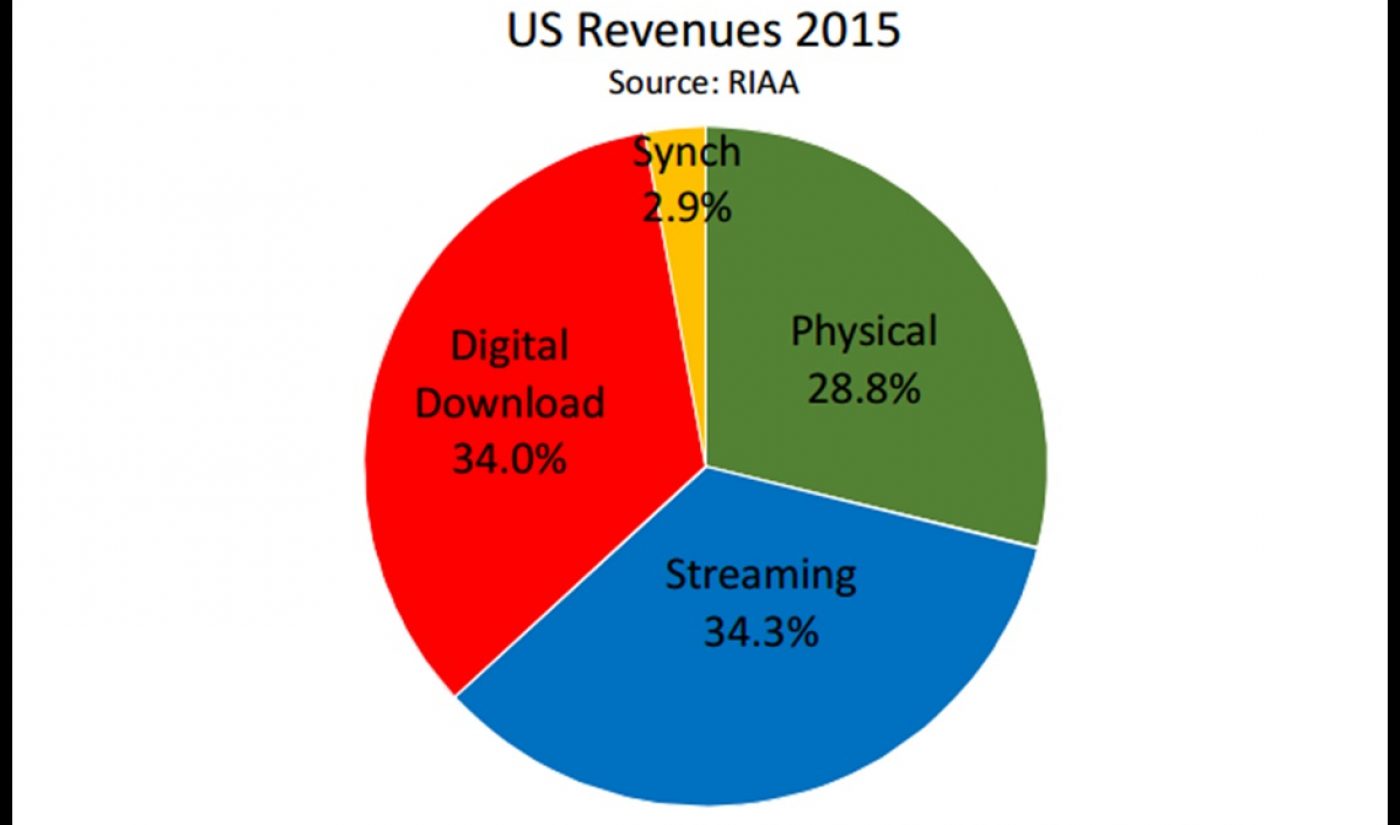 In 2015, for the first time, the music industry generated more revenue from streaming video services like YouTube, Spotify, and Vevo than it did from digital download services like iTunes. The health music world’s rising paradigms seem like a cause for celebration, but the Recording Industry Association of America (RIAA) isn’t completely happy with this shift. In the report announcing its 2015 revenue figures, the RIAA lashed out against ad-supported streaming services like YouTube, which it says deliver “meager” earnings for creators.

While streaming services now top all other sources, the above pie chart, which comes from the RIAA, shows that music industry’s revenue is still split fairly evenly between streaming, digital downloads, and physical album sales. What’s more telling is the rate at which streaming’s piece of the pie has grown. In 2010, streaming services accounted for just 7% of all music industry revenue. In 2015, that figure was 34%.

The RIAA does not seem to have major issues with the subscription-supported services (such as Spotify Premium) that make up that a piece of that streaming wedge. Where they direct their ire is toward free, ad-supported services like YouTube, which deliver a massive amount of content but a relatively small amount of revenue. As the RIAA puts it, those services are seeing a huge year-over-year increase in their streaming numbers, but the rate of increase for revenue has stayed mostly flat.

“We call this the “value grab,” reads a blog post authored by the RIAA, “because some companies take advantage of outdated, market-distorting government rules and regulations to either pay below fair-market rates, or avoid paying for that music altogether.” To support such an accusation, the RIAA turned to one of the recording industry’s favorite facts: Vinyl albums, as old-hat as they may seem, generated more revenue than ad-supported streaming services in 2014.

YouTube does have a potential solution to this perceived “value grab” in its pocket. The RIAA is less-inclined to call out Spotify because that streaming service converts the users of its free, ad-supported service to a subscription-based model. YouTube recently debuted its own subscription-based music service as part of the launch of YouTube Red, and it can now use that offering to generate more revenue from its streams. “With the recent launch of the YouTube Music app, we now have a dedicated music experience that will deliver even more revenue to both artists and the music industry more broadly,” a YouTube spokesperson told The Verge.

In total, the music industry generated $7 billion in revenue in 2015, a slight increase over the previous year. To see all the ways that sum breaks down, check out the RIAA’s report.