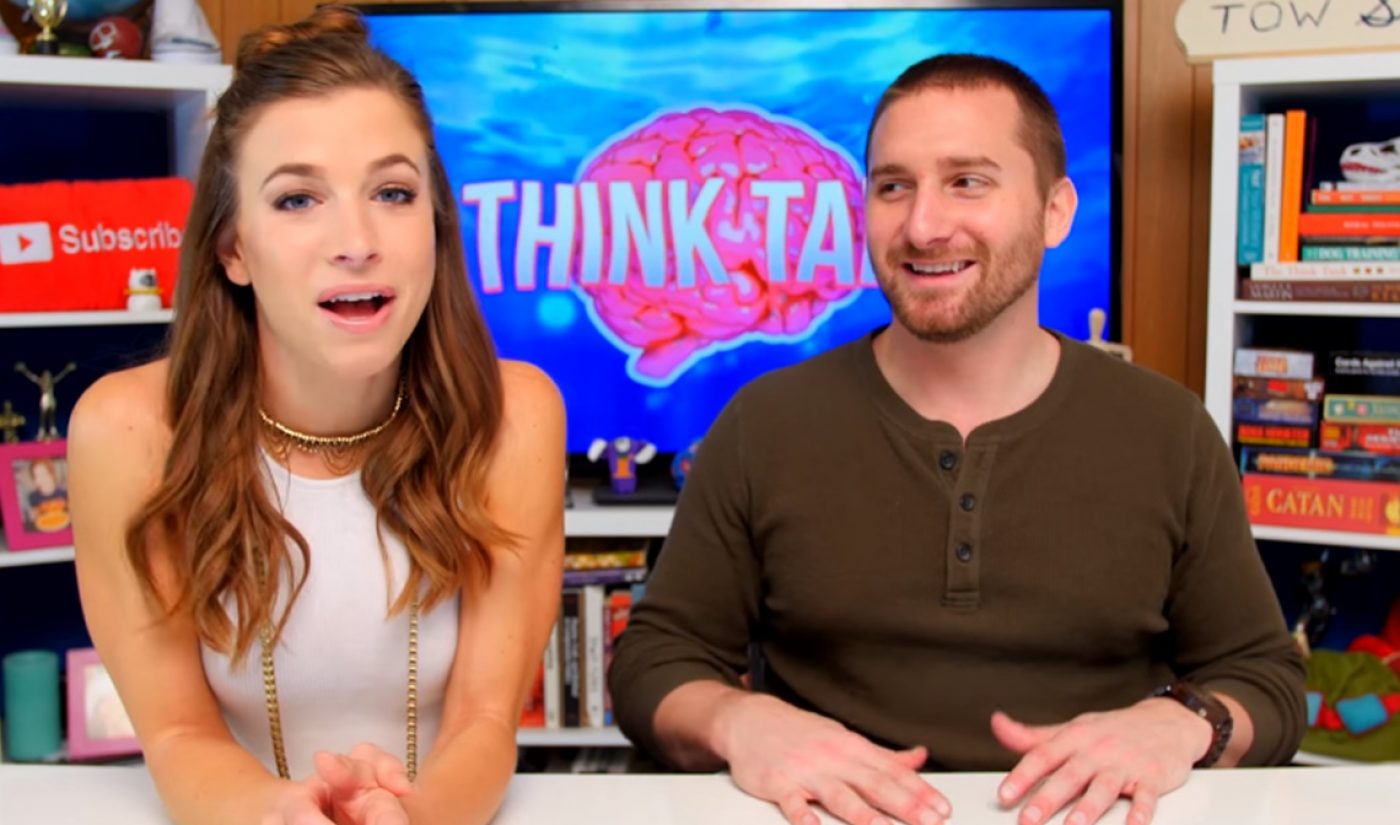 Our YouTube Millionaires column tracks channels that have surpassed YouTube’s most significant milestone, but by the time some channels reach the million-subscriber plateau, they have changed dramatically from their initial concept. A great example is ThinkTank, which began in 2011 as TYT University, a college-themed spin-off of The Young Turks (TYT). In 2015, co-hosts John Iadarola and Hannah Cranston led a re-brand of the channel, molding it into a more general hub called ThinkTank. The pivot was a success, and now that ThinkTank is over one million subscribers, we sat down with Iadarola to talk about the process through which TYT University morphed into something bigger.

Tubefilter: How did you get started with The Young Turks?

John Iadarola: I discovered TYT years ago back when it was on Air America radio. As I went to graduate school, I listened to the show as much as I could. Eventually, they decided to do one of their first major spin-offs, which was going to be a college version called TYT University. They wanted to have people at universities send in videos about the things going on. I, at that point, was such a big fan. There was this debate happening on campus about concealed carry firearms at UT Austin and I made a video about it. Ana Kasparian seemed to like it and she used it on the show. That became my main hobby, making a video every week to send in. They ended up offering me a job and a couple months later I left my program and moved out to join them.

TF: Why did you decide to rebrand TYT University into ThinkTank?

JI: My personal interests were changing. I felt like I had covered so many of those college stories over and over again. If people wanted to see that stuff, it was still on YouTube, where you can see videos from a year or two ago. I wanted to be more free to do the personal interest stuff. I wanted it to still be a college channel, but rather than it being about college, I wanted it to have the philosophy of a person going to college who wants to learn new things and be exposed to new ideas they never knew they were interested in. I tried to create something where I would be able to just go out and find things that blew my mind, and we would just discuss them every day.

We created a new set that was intended to look like an idealized YouTube set. I shoot out of my home, but I’ve tried to make it look very nice. I’ve been shooting in 4K since the very beginning, so that years later, videos still look top notch.

So it was a combination of wanting to catch up with the professionalization of the big MCNs putting more money into high-quality content, and also diversifying our content and bringing in people who have never been to college.

TF: Did you successfully bring in those people?

JI: We had a young audience, and we wanted an even younger audience, and we’ve accomplished that. The vast majority of our audience is men and women ages 18-25. We also wanted to get our gender balance as close to 50-50 as possible. One of the reasons we brought on Hannah Cranston as a permanent female co-host was so we could always have both perspectives. My co-host is even younger than I am, and we were to some extent trying to expand our demographic.

TF: As you adopted a more conventional “YouTuber” tone, did you receive any backlash?

JI: As we were doing a final gear-up to change, that’s when I added Hannah as my new co-host, but I had been on for four years. I knew there might be a little bit of opposition to the name change and look change, and i was worried the fans wouldn’t like some of that stuff, but i figured as long as I was still the person on the screen they would be able to get through it, and they did. It looks different and the name is different, but it’s still just us talking about the topics, and so at the end of the day it’s not that different, but it’s brought in a lot of people who don’t go to college.

TF: Do you think you would have been able to execute your re-brand without the support of a larger company like TYT?

JI: In my specific case, it would’ve been cost-prohibitive to do as much as I did. Our set is not expensive, it’s mostly Ikea, but it was still a cost, and the equipment to do 4K is not super cheap. It definitely helped to have the financial support of a larger company. There are YouTubers who definitely have the money to do it, but to drop a couple thousand on equipment is difficult.

It helped that we were able to bring back some of the same guests who were people from TYT. Ana Kasparian and Jayar Jackson were two of our early guests, and that certainly helped. Visually it looked different, but we were the same people.

I think there are a lot of YouTubers who could do it without that support. YouTube is such a personality-driven thing, so you can do a lot of structural changes. The trouble is when you’re replacing an established personality. I think that’s the biggest thing, and I’m not sure how much a big MCN or backing company can help that, the growing pains of losing someone you’ve been used to seeing on camera for a few years.

TF: What can someone do in order to continue to grow their channel after a re-brand?

JI: People can sniff out in-authenticity, so when you’re getting into YouTube you have to identify your passion. When you re-brand, it can’t just be to draw in people, it has to be something you’re authentically interested in.

I also talked to the fanbase and tried to figure out what were the core things we shouldn’t change. I didn’t want to lose the fundamental stuff the fans liked. At the end of the day, we’ve added a bunch and changed a bunch, but the core of two people giving their honest opinion on a topic is still the same. There’s always going to be trolls and there’s always going to be people who are mad at any change, but I think doing that research beforehand is important, because you can’t just take your own appraisal of the channel.

TF: Looking back, is there anything you would have done differently?

JI: I think my appetite was bigger than my stomach in terms of what I thought we could add. Some of the stuff we announced when we launched we have not been able to do, because we didn’t really know how, until we did it, much extra work the new format would be. So I think I probably oversold myself and some of the early fans on what we could long term. I was so excited about changing everything that I think I got ahead of myself.

TF: would you ever re-brand the channel a second time?

JI: I don’t think so. The original channel had stuff I liked, but it always had problems, and it needed to change. I like what it is now, and even if I was so burned out that I needed to do drastically fewer days per week or we brought in new people, I would rather continue the new format than change it. i don’t think there’s anything like it on YouTube.

TF: Is that even possible, to re-brand again? What about going back to the original concept?

JI: As long as you’re growing fast, I think you can get away with it. Now, 550,000 of our subscribers have come since the channel re-branded, so many of them don’t know it used to be something else. If you’re growing at a good pace, you can probably weather re-brands a little easier.

As for going back…I don’t think it would be received well. I think the format is inferior. It might be possible for some channel to re-brand and go back, but universally that’s not thought of as a good process. That’s one of the reasons why I said you have to do a lot of research before you re-brand, because once you pull that trigger, you can’t necessarily control where it ends up.

On Deck (channels that will soon reach one million subscribers): Brandon Rogers, FitDance, The Late Show with Stephen Colbert