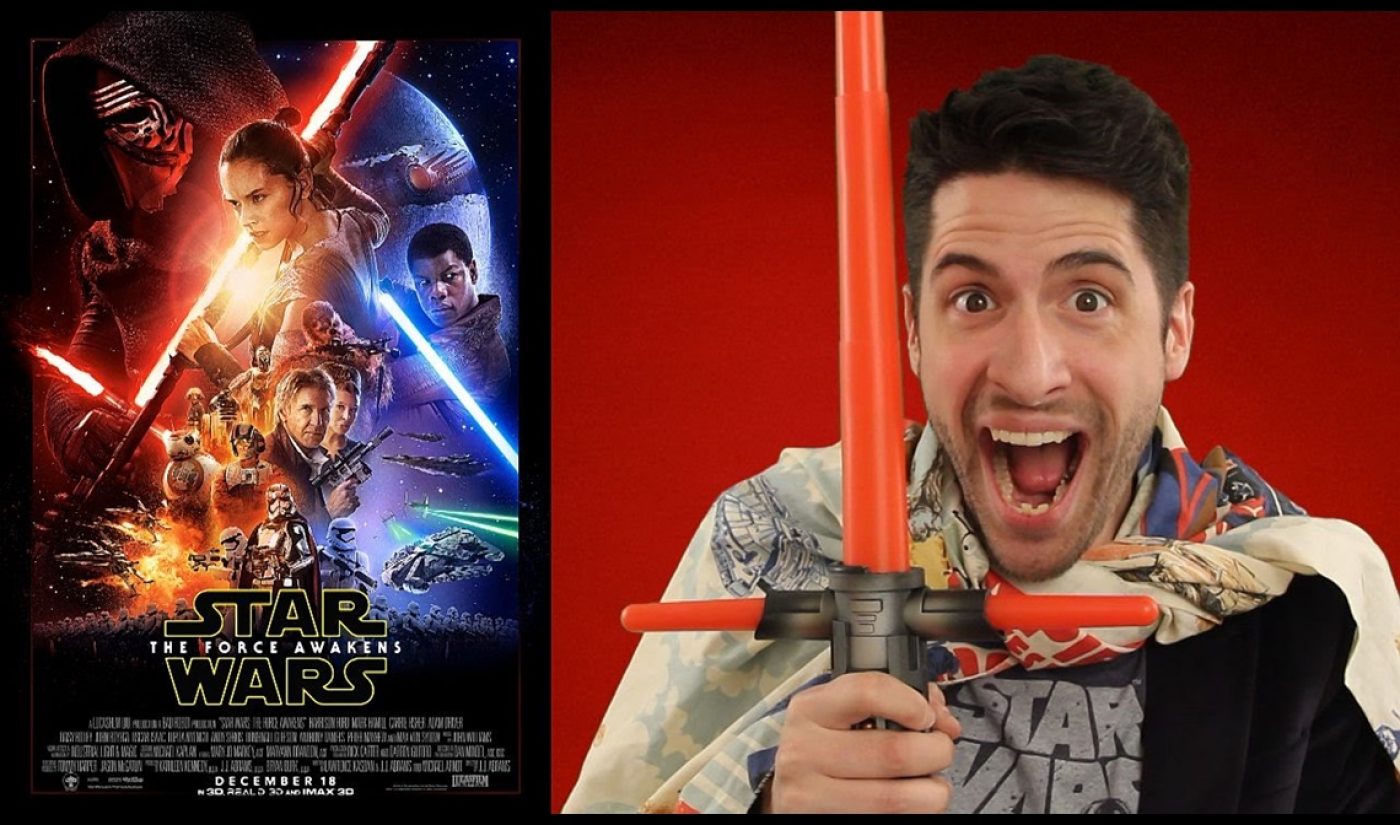 There are many places where aspiring moviegoers can go to find reviews of the latest theatrical releases. On YouTube, many of those moviegoers turn to Jeremy Jahns. Jahns, who is partnered with Defy Media, doesn’t tend to make complicated videos. Instead, he stands in front of a red background and delivers his opinion on a film, video game, or trailer. The complexity arrives within his arguments, which are well-reasoned, colorful, and passionate. Whether he loves or hates a film, Jahns is never shy with his opinions, and his fans — who now number more than one million — love his honesty. Here’s Jahns’ own take on his videos:

Jeremy Jahns: A big “THANK YOU” is in order for sure. I imagine it’s the hope of most content creators putting themselves on a platform like YouTube to gain a following, as it was certainly mine. Then, one day, it happens, and you’re like, “wow…so that’s what one million looks like.” I had never seen something grow from zero to one million, and now that I have that perspective, I can more accurately grasp that it’s quite a thing. The important thing for a content creator to remember, whether they have 100 subscribers or 40 million, is that YouTube content creators (or any entertainers really) are where they are because of their fans. Fan support feeds the entertainer’s passion and vice versa. It’s quite an exercise in symbiosis, so I hope I energize them as much as they energize me.

TF: At what point did you realize you could turn your reviews into your full-time job?

JJ: Now, everyone knows that YouTubers can make money with enough hits, but at the time I started doing videos, I had no idea. I just did it because it was a fun hobby. A few months later, I got an invite to “monetize” my videos, after which it took me a couple months to get my first $100 from Adsense. At that point, I said, “OK, on YouTube, I can make the equivalent of a year’s wage from my job at the movie theater….in about ten years.” So I figured it COULD happen, I just didn’t know I could do it before I died of old age.

Then it took me one month to get $100, and I was like, “well…that’s half the time it took before,” then you keep doing videos, the gaps shorten, and here we are, I’m a fully formed man-child who talks about movies for a living! The important thing is to give back and keep learning. It’s easy to become lazy when you just do YouTube videos, so even when I’m not talking into a camera, I try to keep busy for a healthy state of mind. I truly believe it’s important for balance.

TF: Is there a lot of preparation involved in your review process, or do you prefer to go “stream of consciousness”?

JJ: I used to script out my reviews for the first year-and-a-half, but then I just started talking into the camera with no script due to situational circumstances. I upgraded to an HD camera, which meant I had to upgrade my laptop, which used a different Word document that didn’t show me how many pages my script was (a page-and-a-half was the length of one review with my previous laptop). So, I figured “well, let’s just talk without a script and see what happens”, and the rest is history. I liked how organic and real the ramblings of my videos were without a script. If I am doing a more in-depth video, I’ll have some highlights on a piece of paper like “Kylo Ren fight,” “Rey Lightsaber vision,” etc. But all in all, it’s scriptless.

TF: How many times do you watch a movie before you review it? Do you think you can accurately judge a movie after one watch?

JJ: I watch the movie once and then do a video. I film the video the moment I get home, as I have found waiting days between watching the movie and filming the review results in me losing the details, nuances, and emotions that make a movie special.

I’d say you can accurately assess most movies after only one viewing. However, there are always exceptions to a rule as there are some movies that are meant to be seen a few times, by design, to catch the deeper nuances and garner the full intended effect. I often like looking up old reviews of movies hailed as “classics” now, and read reviews of those films before they were classics, before they were landmarks of cinema, back when they were just one of a multitude of movies released that year. If you seek good entertainment, do try it sometime. Comparing the old reviews of a classic film before it was deemed “classic” and comparing them to the current tomato meter, which ranks these movies only after said film was deemed a “classic” is quite entertaining.

TF: Many of your most popular videos are also your most scathing reviews. Why do you think your fans enjoy those so much?

JJ: People are passionate about film. People love the good, and by contrast, hate the bad. However, passion in anger is just damn entertaining to watch. It is vindicating to see someone verbally destroy this piece of cinema on which you wasted $12 to see. I can think of many times where I myself will be excited when a reviewer says exactly what I was thinking about a movie, so I assume the feeling is very much the same for people who see me say what they were thinking or feeling.

I am a firm believer that positivity will gain you more in life than negativity. That being said, when you sit through two hours of awkward dialogue, horrid acting, and agonizing exposition, it’s good to have an outlet. So if my scathing review helps people feel like they’ve gotten it all out vicariously through my rage, then I am happy to help.

TF: You also review movie trailers. What do you think is the number one mistake studios tend to make when cutting together trailers?

JJ: I often see many mistakes made in trailers, but the one that is simply unacceptable is showing too much. Trailers are meant to tease, and get people excited about a movie without spoiling the plot or surprises. J.J. Abrams trailers do this beautifully. The trailers for The Force Awakens got us jacked for Star Wars without revealing the plot. Even 2009’s Star Trek did this. I couldn’t tell you what the movie was about until I watched the actual movie. In conversations, you cannot un-ring a bell. Once it’s said, it’s said. Once it’s out there, it’s out there. And once the people know, they can not un-know. A spoiler of any kind in a trailer is hands down the biggest mistake a trailer can make.

TF: Given your knowledge of both film and video games, do you think a great theatrical adaptation of a video game could ever be made? What would it take?

JJ: I have about a hundred thoughts on this matter, but I’ll try to condense it so as to not bore you. I believe it can happen, but it would need to be a collaborative effort from a director who is a fan of the material and a studio that has faith in the director’s vision. Video game adaptations are so hard because a game has hours upon hours to develop the plot and characters. A movie has about two hours.

Another element would be adapting a game with adaptable source material. Games nowadays are so alive with characters, dialogue, and atmosphere that a film adaptation might be more of a rival injustice, butchering that which made the game great rather than a faithful adaptation. Using the Metal Gear franchise as an example, I personally think a Metal Gear Solid movie would be insanely hard to do, but a film adaptation of the 1987 Metal Gear for the MSX2 would be a great idea. You have the cinematically developed Metal Gear Solid franchise for the framework of the atmosphere and characters, but the simplicity of the original Metal Gear (though it was advanced in 1987) allows you to expand its world for film and have it feel like you’re adding to the scope of the story, not taking away from it, which sadly happens too often with theatrical adaptations of modern video games.

TF: Which movie has your vote for Best Picture this year?

JJ: Ah, a little known secret about me, I SUCK at guessing Oscar wins. If it were my vote, I’d say The Martian. Simply because it was my favorite of the nominated movies. However, if I had a nickel for every time I saw eye-to-eye with the Academy, I’d have four pennies…yeah…you read that right. I have a friend who always wins the Oscar party guessing game we have every year, and he says Mad Max: Fury Road is going to be the surprise winner this year. I suppose if I were a smarter man, I’d go with that, not because I believe it, but because he says it. However, since I’m a stubborn bastard, I’m sticking with my personal guess of The Martian.

JJ: Well, I am a big believer in “if it ain’t broke, don’t fix it”, so….more movie reviews for sure! However, I’d like to hit up more cons for sure. I started out going to PAX Prime every year, then started going to Comic-Con as well. It’s absurdly addictive. Really, what’s not to love? You get to see cool stuff and meet awesome fans. I don’t like to promise anything if I’m not sure what I can deliver, but I can promise this: I have no intention of quitting YouTube, or movie reviews. As long as my fans don’t get sick of me, I’ll always be here to talk movies. One million is just the beginning.

On Deck (channels that will soon reach one million subscribers): AVByte, What’s Up Moms, AAAjoken