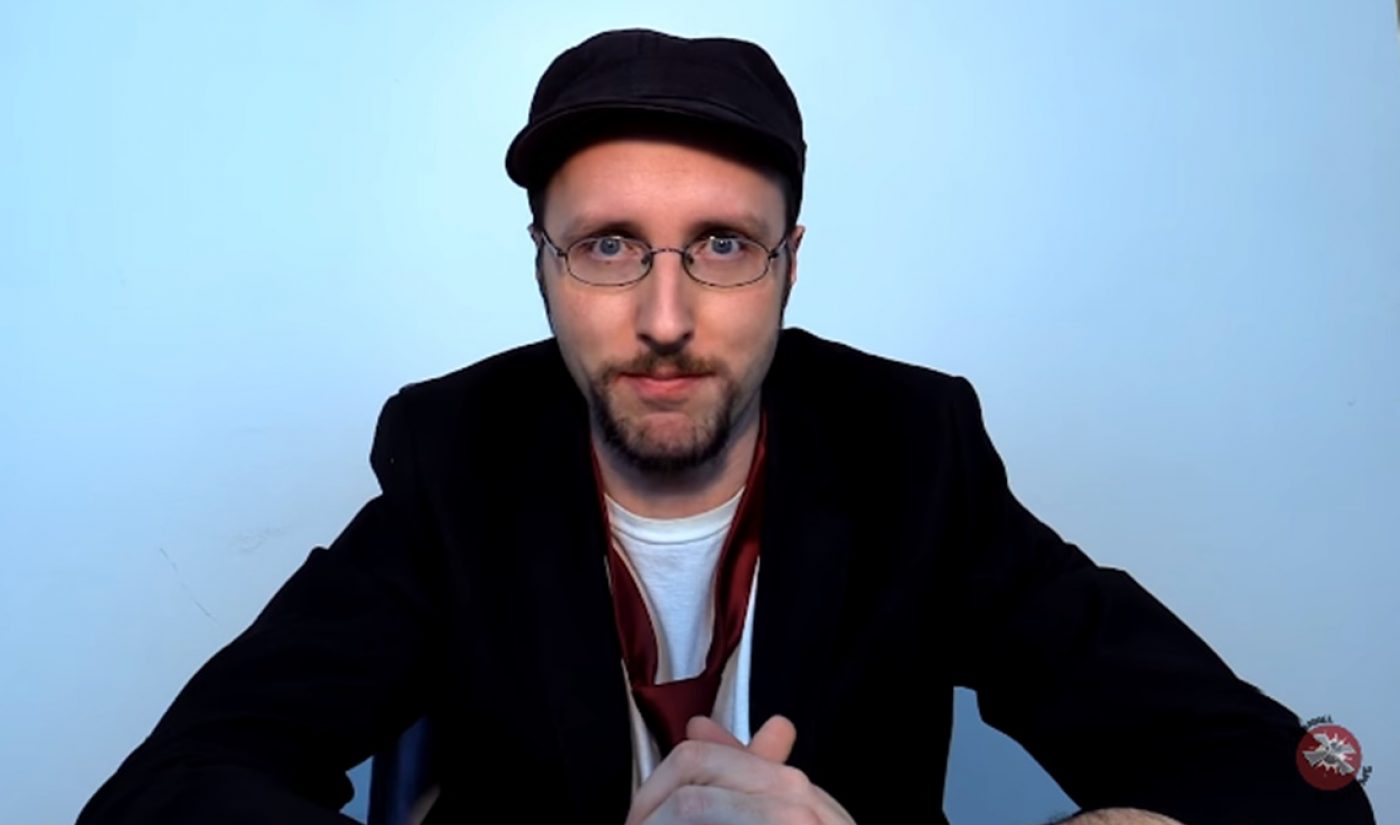 A string of controversial video takedown notices has brought one of the online video community’s favorite hobby horses back into the spotlight. Since the start of 2016, prominent content creators like I Hate Everything and Doug “The Nostalgia Critic” Walker have posted videos documenting their respective struggles with rights holders who issue claims against their respective videos. In particular, one of Walker’s recent videos has been viewed more than 1.1 million times and has left viewers asking “where’s the fair use?”

The relationship between fair use, Content ID, the Digital Millennium Copyright Act (DMCA), and other forces that govern copyright law on YouTube has for years been a contentious subject. In 2013, a change in YouTube’s policy set off a wave of claims against creators both big and small. Some of the claims were valid requests that hoped to crack down on videos that infringed upon existing copyrights; others, however, were invalid claims that looked to weaponize YouTube’s Content ID system against creators who were ill-equipped to defend themselves. As a result, many prominent channel owners called for reforms to YouTube’s policy.

That controversy eventually died down, but a related dispute is now sweeping across the Internet, and many creators are angry. In his “Where’s The Fair Use?” video, Walker shared his frustration with YouTube’s claims system. Joined by I Hate Everything and others, his upload discussed the difficulty he has experienced as he has attempted to fight legal claims made against his videos. “I’ve been doing this professionally for over eight years and I have never had a day where I felt safe posting one of my videos,” he says, “even though the law states I should feel safe posting one of my videos.”

Are there ways in which YouTube’s claims system can be reformed? Should it be? As you might imagine, those are complicated questions, but they’re ones worth discussing, especially now that fair use is such a trending topic.

For many years, YouTube was referred to as the “Wild West,” based on the assumption that anyone could head out into its vast expanse and obtain the wealth, success, and recognition they could not find elsewhere. That comparison doesn’t really work anymore, because YouTube, unlike the Old West, is now governed by some concrete laws. The Content ID service, through which rights holders can seek out and claim infringing videos, acts as an automated police force of sorts, and its presence is very important.

The social media giant has recently upped its video presence and claimed billions of views per day, but it has built its video community without also building an adequate tool to protect it. As a result, “freebooting”–in which a pirate downloads a video and re-uploads on his own page–is a rampant practice on Facebook. In one isolated but high-profile example, popular creator Casey Neistat claims to have lost more than 20 million views thanks to the actions of freebooters.

On YouTube, the presence of Content ID mitigates freebooting. Pirates who attempt to swipe videos are easily caught by video matching software, and repeat offenders are punished with strikes against their channels. It’s like baseball: Three strikes and you’re out.

In theory, this system protects content creators more than it hurts them. Creators can use claims to defend their work, and the only people who feel the consequences are those who are attempting to circumvent the law. “The goal of Content ID is to protect someone,” said Mike Skogmo, the VP of Communications at viral video licensing company Jukin Media, which has a lot of experience navigating ContentID and video ownership rights in the digital entertainment paradigm. “There are always two creators: There’s one who’s reusing someone else’s content, and one whose video has been used without a license. I think a lot of people forget about the latter creator. I think it should be a bigger part of the conversation.”

The existence of fair use makes the relationship between claimant and video uploader much more complicated. “Fair use” is a legal principle that defends creators who use unlicensed material to comment on it, criticize it, or parody it. The legal doctrine of fair use employs a four-part definition that examines how much of a copyrighted work has been used and how much it has been transformed. In many cases, fair use can be a tricky concept to examine, and many creators that use the doctrine to defend themselves live in a grey area between fair use and infringement.

Justified or not, many rights holders will go after creators who claim fair use. For Walker, who has made a living through critical videos, this means sorting through a lot of claims while — because of the constraints of the current system — only being able to contest three of them at any given time. It is that imbalance (unlimited claims vs. a maximum of three contests) that makes creators like I Hate Everything see YouTube’s claims system as “hilariously slanted and weighted against the creator.”

The restrictions imposed on counter-claimants are, like Content ID in general, theoretically sensible. After all, an obvious freebooter who is ripping hundreds of videos at once should not being able to waste time with counter-claims. When fair use becomes involved, however, creators can and do have dozens of valid counter-claims they wish to file all at once, and on this issue, Walker’s frustrations are valid.

Mike Michaud, CEO of Channel Awesome (which is partnered with Walker and others) expressed some of these frustrations in an interview with The Daily Dot. “Why are we penalized before we’re deemed guilty?” he asked. “The strike shouldn’t hit the account until it’s been resolved in favor of the creator or of the studio. Google can still take the video down—that’s what they have to do to follow the safe harbor provisions—but they don’t have to issue the strike.”

If there is any part of YouTube’s claims system that should be reformed, it’s the one Michaud discusses above. Given the severe penalties associated with strikes, creators should not be subjected to them until their guilt is reasonably established. That point, however, leads to a secondary problem: Were YouTube to change its rules, it would put itself at risk.

YouTube is currently protected by the DMCA’s “safe harbor” provision, which absolves it of blame for infringing material posted by its users so long as it adheres to certain guidelines. Safe harbor, like all the other legal concepts involved in this story, is complicated, but at its core, it requires YouTube to take action against infringing videos so long as the video site is properly notified by a rights holder.

YouTube’s “safe harbor” status has held up in court numerous times, most notably against Viacom, which has launched several lawsuits against the video site. Were YouTube to give more power to counter-claimants, it could risk its “safe harbor” protection and open itself up to more lawsuits.

Instead, YouTube has supported its fair use-protected creators in other ways. Most notably, it has pledged legal support to creators who have been unjustly targeted by rights holders. That is certainly a step in the right direction, but it only applies to certain creators, and the ones who aren’t receiving YouTube’s legal assistance — the Doug Walkers and I Hate Everythings of the world — are understandably miffed by that.

If content creators want YouTube to significantly reform its policy, they need to accumulate more power. At the end of his video, Walker attempts to rally his viewers around a cry of “Where’s the fair use?” The hashtag #WTFU has emerged as a result, and prominent creators like Boogie2988 and Chris Stuckmann have shared their own videos in support of Walker.

It is important for the creative community to create a movement that represents its own interests, especially as bigger media companies continue to establish their own channels on sites like YouTube. It is equally important, however, to remember that creators have organized before. YouTube multi-channel networks, after all, were originally created by bands of like-minded individuals with a shared hope and vision for YouTube and a desire to launch a new paradigm in entertainment.

But the unfortunate truth is that the online video community is so vast and so diverse that it would be hard for one organization or legal entity to ever represent its interests. Some people, like Walker, are trying to make critical videos that respect fair use. Others are most interested in protecting their work from freebooters. Some people just want to upload videos of their cats. How could a creator-focused movement gather the MCN-level power it would need to change YouTube’s policy while still respecting the varied concerns of its constituents? I’m not sure I know the answer to that question.

What creators can and should do is protect themselves. Know your rights. Know the difference between fair use and copyright infringement. Understand that, if you have a valid case, you can win a court battle, as independent creator Stephanie Lenz did last year. If you need legal counsel, know who you can reach out to. Since emerging as an authority on digital copyright law, the Reddit user known as VideoGameAttorney has received more than 700 emails from creators who want him to represent their interests. New Media Rights, an “independently funded non-profit program of California Western School of Law,” has also helped several content creators trudge through the muddy legal waters of fair use.

More than anything else, however, creators should remember that YouTube is at least trying. Its system is far from ideal, but it offers more protections than the other platforms that can approach its scale. “I think it’s an imperfect system, but I think it’s also better than any system that’s ever been developed for the web,” said Skogmo. “What they’ve come up with is well beyond anything else that’s out there, and I don’t think they get enough credit for it.”

Creators like Walker, who rely on fair use, are in a sticky situation, but all they can do is keep fight. Keep contesting unjust claims. Keep fighting back. YouTube isn’t the “wild west” anymore, but its creative community maintains a diligent and industrious spirit, and that cannot be taken away by any copyright claim.