FouseyTube Just Did The Impossible. He Took A Break From YouTube (With Help From His App) 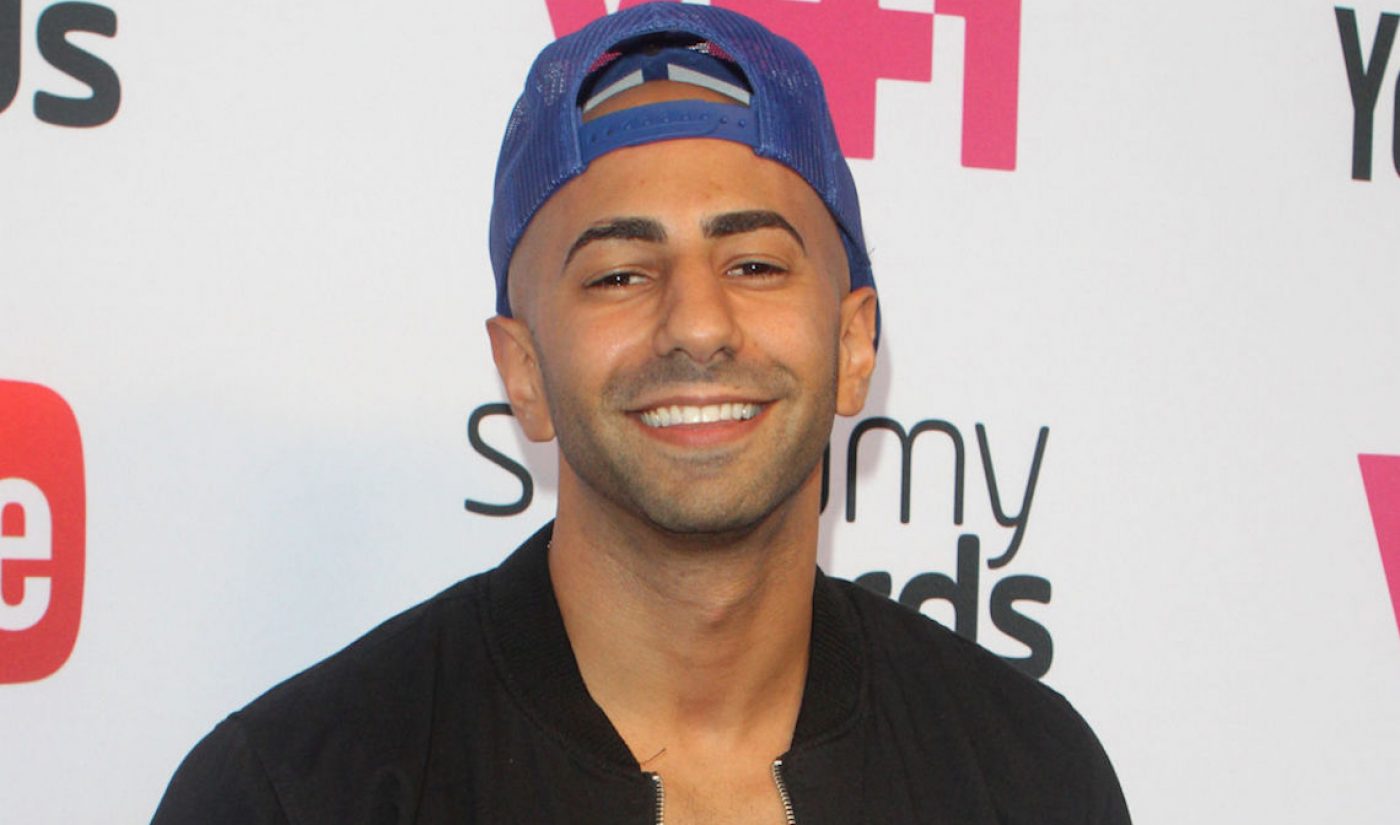 Yousef Erakat is a bonafide force of YouTube and shining embodiment of newfangled social media celebrity.

The 25-year-old Fremont, California native started his FouseyTube YouTube channel in March 2011 and, with a steady supply of well-orchestrated prank videos peppered with motivational uploads replete with uplifting scores, has grown that channel to more than seven million subscribers and over one billion views to date. And that’s just the dude’s main YouTube destination. Erakat started posting to his multiple-times-a-week vlog channel DoseOfFousey in January 2014. That now has over two million subscribers and close to 200 million views. Outside of YouTube, Erakat is in possession of more than two million fans on Facebook, 800,000 followers on Instagram, and 550,000 followers on Twitter.

Those 13-million-or-so aggregate fans and followers are rabid, too. Propelled by the sheer social power of the DoF Bruh Bruhs (that’s the name Erakat has given to his followers aka “The Best Family On YouTube”), his FouseyTube channel beat out Smosh, Rooster Teeth, Rhett & Link’s Good Mythical Morning and a short-list of the most popular channels on YouTube to take home the trophy for Streamy Awards Audience Choice Show of the Year. Below is his acceptance speech. The uninitiated should watch. Between the confident swagger, charming smile, candid story of his perennial struggle with a number of personal vulnerabilities, and inspirational message, it’s incredibly easy to see Erakat’s appeal:

The awards, accolades, and more-than-adoring fans are all impressive accomplishments. But what’s perhaps a more extraordinary feat is what Erakat did on November 24, 2015. That’s when he took a break.

In a 14-minute vlog, Erakat explains how during the holiday season he always feels in need of a breather. He generally just goes AWOL, but this year he wanted to make it more formal and let his fans know he was in need of some downtime before he would be back full-force in the not-so-distant future. Check it out:

i’d like to thank all of the DOF bruh bruhs who have supported me this year and made it one to remember forever. so much has happened that it’s finally time to process it all. i thank you sincerely for respecting my decision of walking away for a second and taking a break. it’s so liberating to be able to walk away from the shackles and the pressure of views and money and status and realizing that no matter what, i am going to be ok and happy. this is the first time all year i am choosing to put myself first and ask myself “how do i feel?” i spent every day making sure that my family (you) was feeling good and happy that it replaced the need to worry about myself. you guys are some of the most amazing people in the entire world and am thankful everyday for you being in my life. 2016 is going to be a crazy ride and i cannot wait to share the experience with you! soooo. for now. i’m gonna log off social media and just smell the fresh air, sip the green tea and let my rawwwwr rest for a bit. i love you and i’ll talk to you again soon! 🙂

To be clear, this is something you don’t do. If YouTube was Fight Club, the first, second, third, fourth, and every rule would be, “YOU DO NOT TAKE A BREAK FROM YOUTUBE!” Prominent online video superstars have described in depth how consistency has been key to their success. ShayCarl built a sizable family-friendly online video empire off of his multi-year daily vlogging schedule. Phil DeFranco more times than not takes his editor Matt Homeyer on trips in order to stay up to speed with a multiple-times-a-week upload schedule. And YouTube’s Creator Handbook cannot emphasize enough the importance of a dependable and persistent posting plan in growing and maintaining an audience, encouraging creators to bank videos to post during periods of time when they know they’ll be pre-occupied with other business endeavors or life at large.

In a chart of the attributes that make up modern day social media success, consistency, awareness, and relevancy are almost all concentric circles in the same Venn Diagram. Erakat knows this. In his “Goodbye, For Now. 🙂” video he talks about how when he asked people if he should take a break, their response was, “No…You’re doing this! You’re doing that! The views! The money!” The concern is real.

During Erakat’s break, his DoseOfFousey channel has averaged roughly 306,000 views per day. That’s down from an average of roughly 815,000 views per day during the month prior. But what’s more potentially devastating than a 60% decrease in views is the threat of losing touch with your audience. Because when you’re a YouTube star, you’re the face, the brand, and the primary distribution point of your stardom. If you’re not providing any output, if you’re not posting videos, Tweeting, FaceBooking, Instagramming, and Snapping, then there’s no way to keep your star burning. There’s no way to get the views, comments, shares, and likes you need to maintain and/or grow your audience.

At least there wasn’t, until Victorious built an app for that. The creator-facing startup that’s constructed bespoke mobile applications for some of YouTube’s biggest stars launched Erakat’s DOSEofFOUSEY on November 20, 2015. It was an instant hit. Within hours of its release it peaked at the #3 spot on Apple’s iOS Entertainment charts and to date has been home to more than 11 million fan engagements. But more than all that activity, the application provided Erakat with a respite from the usual YouTube and social media grind. It was a location full of superfans who he knew had his back that he felt comfortable interacting with in a closed environment while he was on a break from his greater social media accounts. So, yes, to be explicit Erakat didn’t go completely analog on his break and shuffle off all fan interactions. While he was committing a cardinal sin of social media in not posting to any of his accounts, he did interact with the tight community on his app, providing them with the occasional casual photo or simple text messages with random thoughts or motivational messages. But even if Erakat had stepped away from all digital interaction, his fans would’ve kept up the momentum for him.

“The quantity and quality of fan engagements we see in Victorious-powered communities aren’t happening on any other platform and the Dose of Fousey app is no exception,” explained Victorious CEO and Founder, Sam Rogoway.  That’s because Victorious’ applications are constructed in such a way where the social media star isn’t the only one who’s able to post. Erakat is certainly the focus of his application, but there are also thousands of fans – some of which have grown to have sizable four-and-five-figure in-app audiences of their own – posting their own original FouseyTube-related and non-related content.  The experience feels like an old school message board reimagined for an impassioned and mobile generation.

“Rather than all of the content being driven by the creators themselves, in our communities fan-generated content represents 95% of content consumed,” said Rogoway. “Fousey fans have come together to share everything from personal stories to inspiring videos and funny anecdotes in an environment that is positive and supportive – it’s a great example of how passionate fans can inspire each other and thereby scale a creator’s brand through community.”

Erakat announced via Twitter on December 16, 2015 that he’s back from his break, seemingly relaxed, refreshed, and rejuvenated. His followers are all very happy.

But for Erakat’s hardcore fans in his in-app community, it was like he never really left. They were still with him during his absence. They provided support and encouragement while interacting on their own with like-minded members of the community in some new kind of inner circle because Erakat spoke to them when he wasn’t speaking to anyone else.

“I stepped away from my main channels for a couple of weeks to better balance my time and give full attention to some projects that will be announced shortly,” Erakat told Tubefilter. “I was still able to find opportunities to stay connected to bruh bruhs through my app and can’t believe how engaged they are even when I pause on pushing out as much content as usual. I think the loyal community that follows me is the same at every outlet and they will be pumped to hear what’s been going on behind the curtain! 2016 will be CRAZY!”

Erakat’s three-week social media vacation impacted his view count, but the effects could’ve been far more severe. And, by way of his application and the community within it, his break may have actually had the unexpected effect of intensifying the devotion of his hardcore fans and bringing them all closer together.