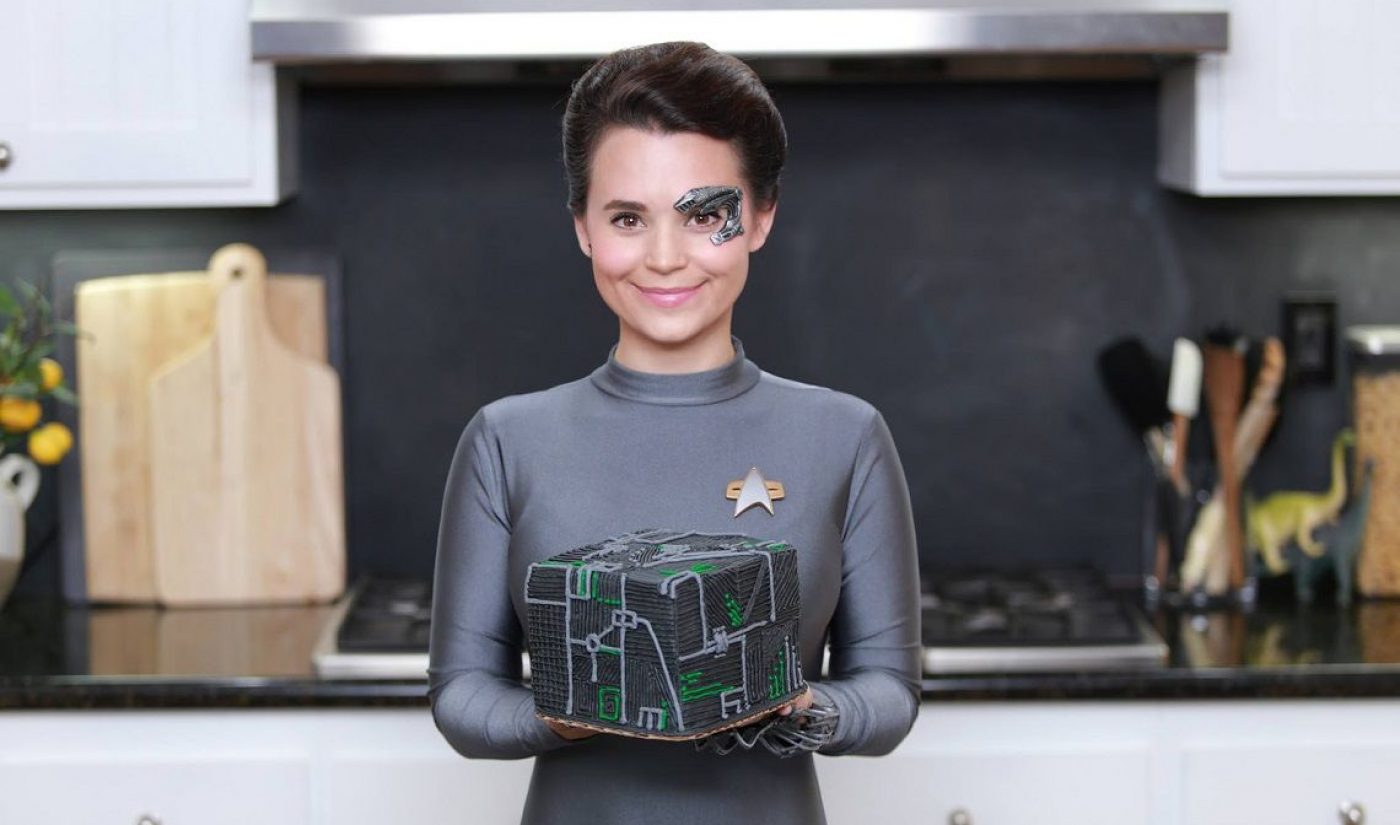 Rosanna Pansino has made a name for herself as one of the most prolific (and geeky) food vloggers on all of YouTube. The digital celebrity boasts over 4.7 million total subscribers and a collective one billion views on her channel. In part because of the young star’s infectious personality and in part because of her success, YouTube featured Pansino alongside beauty and lifestyle creators Michelle Phan and Bethany Mota in the company’s 2014 inaugural print, TV, and digital display ad campaign focused solely on creators. Pansino, who’s partnered with Kin Community, has also teamed with brands like home decor company Wayfair and cake decorating magnate Wilton Enterprises for branded series.

Now, Pansino will join the ranks of published YouTube authors with her upcoming publication The Nerdy Nummies Cookbook, based on her wildly popular web series of the same name. Pansino’s debut print work hits digital and store shelves on November 3, 2015. To celebrate the Nerdy Nummies Cookbook and kick off a 30-stop book tour, Pansino will appear at Stream Con NYC on October 31. Here’s what the digital baking and cooking celebrity had to say about her book deal and her plans for this coming year:

Rosanna Pansino: I wanted the Nerdy Nummies cookbook to be an embodiment of the show. I am a very visual learner so each recipe in the book has 6 or more step by step photos walking you through the process. The book has over 420 full color photos.

I wanted to create a really fun, colorful, easy-to-use cookbook that would spark creativity and encourage people to have fun with food. I have a hard time following some cookbooks that don’t include enough how-to pictures, so I really focused on making The Nerdy Nummies Cookbook as accessible as possible.

TF: What was your favorite part about writing the book?

RP: I got to spend a lot of time with family throughout the entire process. All of the recipes were made in my kitchen and the pictures taken in my dining room. You can also never go wrong with test baking new recipes!

TF: Was there anything you wanted to include in your book that had to be left out?

RP: I had full creative control of The Nerdy Nummies Cookbook so I made sure to include all of my favorite recipes. Each recipe also includes a little blurb on why I chose that recipe and a story of why it’s important to me.

TF: Where do you get the ideas for all your recipes?

RP: I spend most of my time test baking new treats every week; it is a creative outlet for me. Friends and family also suggest new ideas that they think I might like.

TF: If you are offered a second book deal, what do you think that one will be about? Would you want to do another cookbook or would it be about something else?

RP: Right now I am focused on the upcoming book tour, where I will get to meet fans all over the country at over 30 stops. I do have a lot of ideas I think would be fun for a new cookbook though! I absolutely loved making my first cookbook and am hoping readers enjoy it as much as I enjoyed making it. If it’s something people want more of I would love to make another book.

TF: Why do you think YouTubers have so much to offer for readers and the traditional publishing industry?

RP: Every single YouTuber I know works extremely hard and is full of creative ideas. Someone who enjoys creating videos might also enjoy making a physical book.

TF: What are your plans and goals for 2016? Anything people should be on the lookout for?

RP: I have a new website launching soon, my very first merch, The Nerdy Nummies Cookbook tour, and a few unannounced projects that I’m working on for 2016. I plan to keep doing at least 2 videos a week in addition to starting a few new series. 2015 was a really fun year for me and I am excited to see what new projects 2016 holds.

Pansino, along with a host of other famous digital and YouTube stars, will be at Stream Con NYC. You can get your tickets to that event here. You can also check Pansino’s tour dates and pre-order her book, which hits digital and store shelves in November 2015, through the Nerdy Nummies Cookbook website.