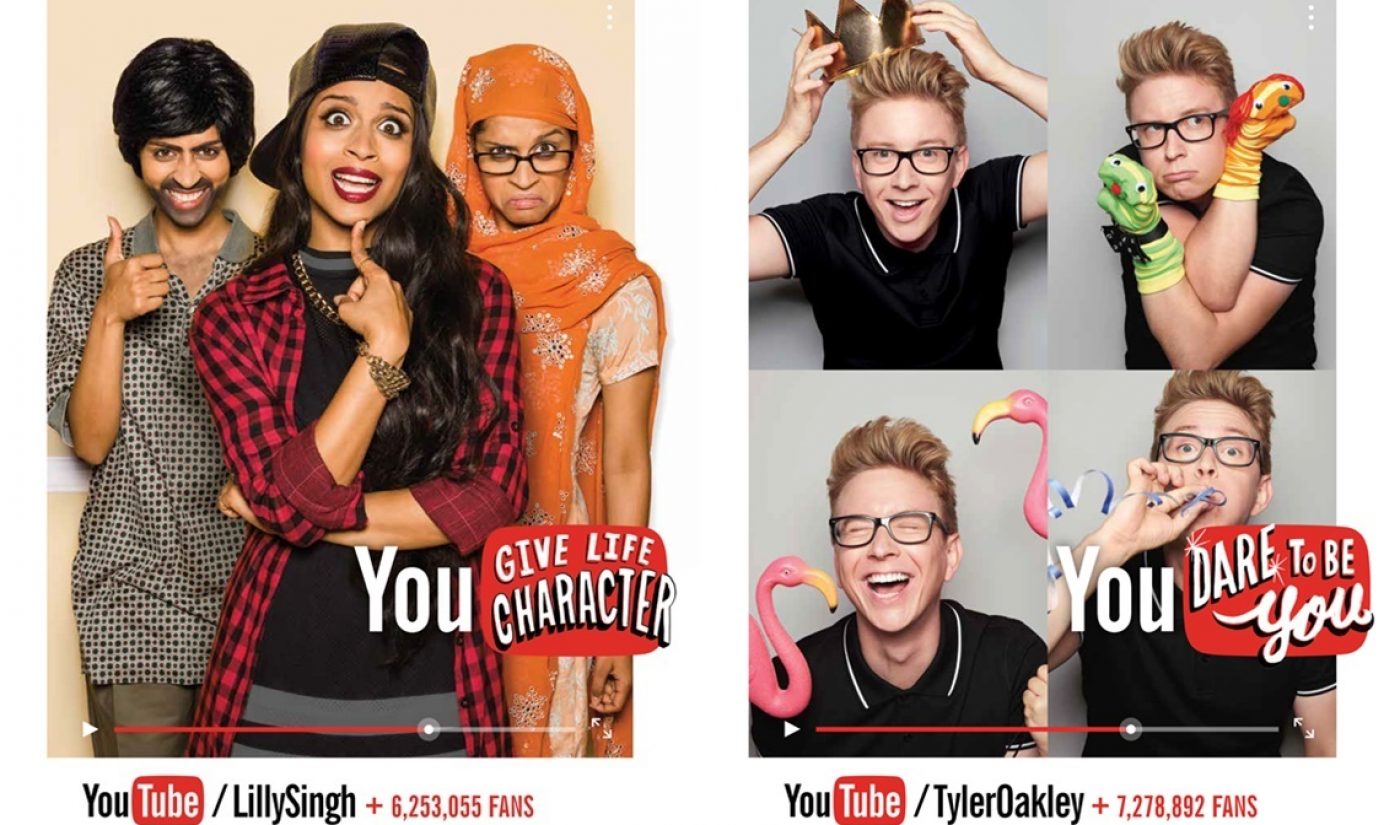 YouTube is once again launching print, TV, digital, and billboard ads that promote its most popular homegrown content creators, and this time, it is focusing on a pair of its most marketable stars. Vloggers Lilly “Superwoman” Singh and Tyler Oakley will be the next two poster children for YouTube’s 17-month-old marketing campaign.

The first round YouTube’s creator-focused ads launched in April 2014, when Michelle Phan, Bethany Mota, and Rosanna Pansino appeared on billboards, in TV commercials, and across several other highly-visible locations. Since then, YouTube has expanded the campaign a number of times, with each expansion focusing on a new selection of content creators. The world’s biggest video site even brought the campaign overseas, where it featured British stars like Zoella and The Slow Mo Guys. In total, ten creators have been put in the spotlight.

This time, YouTube has opted to promote two of its most likeable personalities. Singh is an Indian-Canadian creator whose vlogs and sketches have attracted millions of fans. An upcoming tour documentary, A Trip To Unicorn Island, will detail the fervor and passion of Singh’s devotees, and by promoting her on billboards, taxis, subways, and many other visual media, YouTube hopes to spread her star even further.

Oakley, on the other hand, is a charismatic twentysomething known for his vlogs, his discussion of LGBT topics, and his charity work. Along the way, he’s made some powerful friends, including First Lady Michelle Obama and (it would seem) Presidential candidate Hillary Clinton. He’s also slated to co-host the upcoming Streamy Awards alongside Grace Helbig, who was herself featured in a previous YouTube ad campaign.

“Our creators are the foundation of YouTube and the passionate communities of fans they have each created spans the world,” said Anna Bateson, Director of Global Consumer Marketing at YouTube. “We have a very diverse group of people and voices, but one thing YouTube creators have in common is their authenticity and their ability to connect with their fans in an honest and personal way. Two of the most beloved personalities on YouTube today are Lilly Singh and Tyler Oakley, and we are so excited to spotlight their channels over the next few months.”

According to YouTube, stars featured in the ad campaigns have seen big jumps in recorded awareness as a result of these promotions. For some, YouTube says, the jump is as big as a 300% increase. Keep an eye out for the Oakley and Singh spots–and the resulting “bump” we expect to see.