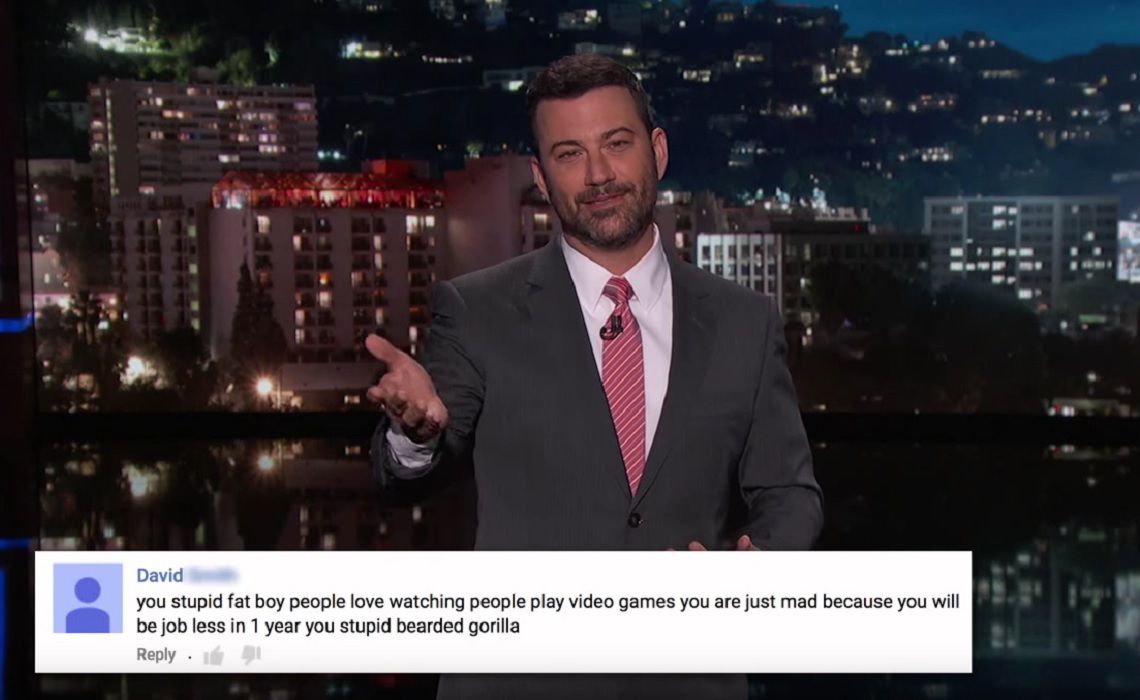 Jimmy Kimmel just invoked the wrath of millions of YouTube and gaming fans around the world. On August 28, 2015, Kimmel released a segment called “YouTube’s New Video Game Watching Service” where he introduces a fake service called “YouTube’s Watch Watch” for people who want to watch others watching video games. Essentially, Kimmel poked fun of the online video site’s newly-released gaming hub, the entire genre of Let’s Play gaming, and all the people who watch other people play video games.

As you can guess by the title of this story, the previous paragraph, and the premise of Kimmel’s “joke”, the bit didn’t go over so well with the online video gaming community and its tens of millions of fans. The clip of the segment currently boasts the title of the most-disliked video on the Jimmy Kimmel Live YouTube channel, with over 63,000 thumbs-down (and only 5,300 thumbs-up). The ABC host received an influx of negative comments, which he referred to as an “avalanche of mostly misspelled vitriol.”

Kimmel then posted another video (which currently boasts 16,000 thumbs-down) to respond to some of the comments attacking him and his views. The ABC host mostly just ignored the responses in an attempt to point out the worst of the worst commenters, like one which called the host a “stupid beardless gorilla” who would lose his job in one year. Kimmel ends the clip saying he’s open to watching video game content if a YouTube gamer or game watcher were to invite him over, but ultimately telling video game watchers to “go outside and play.”

One famous YouTuber in particular didn’t take kindly to Kimmel’s response video. Philip DeFranco commented on the clip, saying, “Doubling down on an ignorant point of view by only showing the worst of the comments… Cool story. If you meant what you said about being open to this experience and it wasn’t just a setup for your ‘Go outside’ outro, then I am sure a few high level gaming youtubers would be happy to have you tag along.”

Matthew Patrick of The Game Theorists (who just launched a second channel called Film Theorists) has already taken Kimmel up on his offer and invited the host over to show him what he’s missing.

It’s likely Kimmel will have to deal with even more negative ramifications than just comments for attacking the massive world of YouTube and Twitch gaming. SuperData Research recently revealed the gaming content industry pulls in $3.8 billion a year, with Twitch alone claiming 43% of that revenue. Gaming creators like PewDiePie routinely pull in millions of viewers (and even dollars) by recording or live streaming gameplay sessions. And as YouTube CEO Susan Wojcicki recently pointed out, Google’s site currently claims more viewers on mobile alone than any single cable channel.

Granted, as a show host, Kimmel has the right to take a jab at any culture, group, or topic he pleases. But in the future, Kimmel might want to take a lesson from fellow late-night host James Corden about how to approach YouTube culture. The British host for CBS’ The Late Late Show recently filmed a YouTube-themed episode at YouTube Space LA to celebrate the site’s tenth anniversary, complete with famous digital stars like Jenna Marbles, Tyler Oakley, and even the Double Rainbow Guy.

YouTube fans seemed to appreciate Corden’s nod to their culture; the episode trended on Twitter during its August 21 airing.