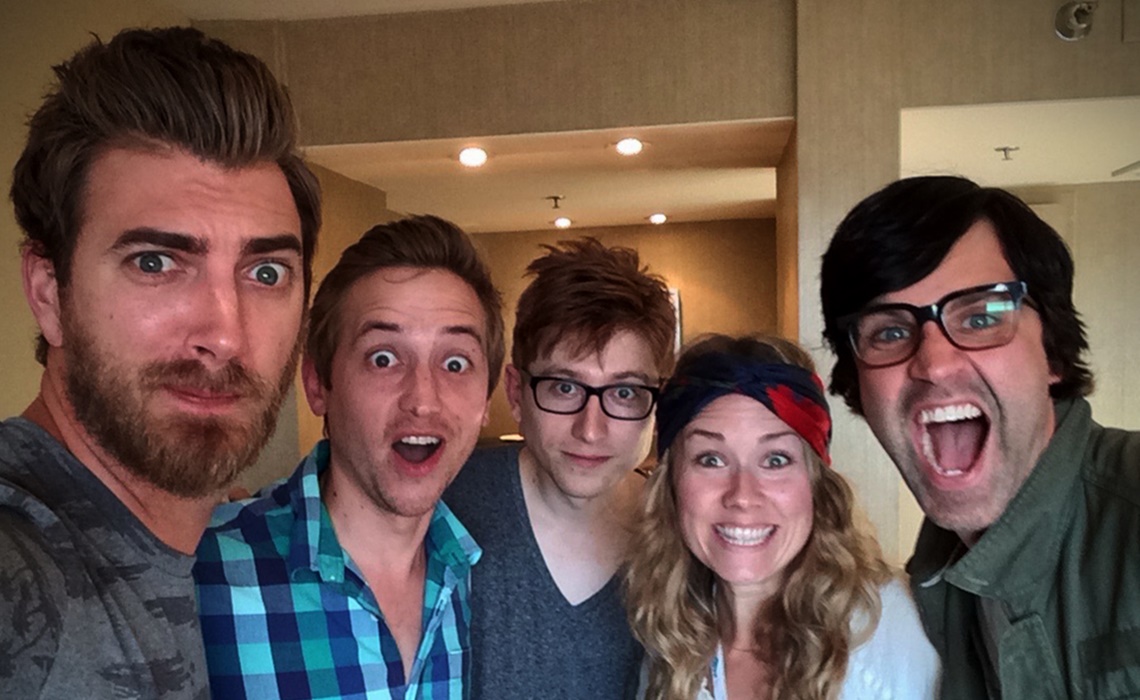 For The Gregory Brothers, Creative Projects Are A “Constant Balancing Act”

Out of all the podcasts led by YouTube stars, we’re particularly partial to Ear Biscuits, hosted by the inseparable duo of Rhett McLaughlin and Link Neal. Each week, we will bring you a recap of the latest Ear Biscuits episode, as well as an invitation to listen in and join the conversation.

This week’s guests on Rhett McLaughlin and Link Neal’s Ear Biscuits podcast are a group of musicians who are in the process of defining their legacy on YouTube. The Gregory Brothers, who have received hundreds of millions of views, have become well-known for their autotuned “songificiations” of the news. During their time on the podcast, however, the question they ultimately arrive at is “what’s the plan moving forward?”

The Gregory Brothers are a quartet, but only three members–Michael, Evan, and Sarah Gregory–are present for the podcast. The other brother, Andrew, was on his honeymoon at the time (his wedding was just featured in the New York Times.) The conversation with the three remaining Brothers discusses more than seven years of music and hits on topics ranging from failed American Idol auditions to the credits song for Unbreakable Kimmy Schmidt.

The arc of The Gregory Brothers’ Internet career received its first significant lift when Michael–by all accounts the initial driving force behind the auto-tune videos–produced a few “locally viral hits.” The next year brought with it the 2008 presidential election, and it was during those months that a star was born. By identifying “accidental singers” like Joe Biden and Sarah Palin (whose voices work well when treated to extensive auto-tuning) and utilizing a “quick turnaround,” The Gregory Brothers scored thousands of views. At that point, Evan says, “it felt like we got an inkling that people think this is interesting and funny.”

After they “hit the jackpot” with a popular video starring Katie Couric (“She was the greatest,” says Michael), The Gregory Brothers quickly became YouTube sensations, but their collective star would grow even further when they began to apply the formula to viral videos like the “Double Rainbow” guy. “That was the first time we got this picture that we were starting to be one of the bigger fish in this pond of YouTubers,” explains Michael. Ultimately, the focus on viral videos would lead to the most popular YouTube video of 2010: The “Bed Intruder Song.”

The success of hits like the “Bed Intruder Song,” however, brings up a fundamental question of YouTube stardom: What can you do to become known for more than just one concept? It’s a question that The Gregory Brothers keep in their minds. “Striking that balance of how much energy you put into one projects versus another is a constant balancing act,” says Evan. Instead of focusing on recreating the success of past viral smashes, the Brothers are now trying to “stay in the game and be consistent.” As Evan puts it, “our audience is still there.”

In the end, though, The Gregory Brothers are driven not by the videos they create but by the strong bonds they have developed with one another. “We put in all this time learning how to work together,” says Sarah, “and it would be a shame to throw it out the window.” Evan agrees. While he admits he doesn’t know how long it will be “until the environment totally changes,” he says that “right now, we still really enjoy making videos together.” And you can run and tell that.

The Gregory Brothers’ full biscuit with Rhett & Link is available on iTunes and Soundcloud.