Honesty And Independence: Naomi Lennon On Managing A New Breed Of Celebrity 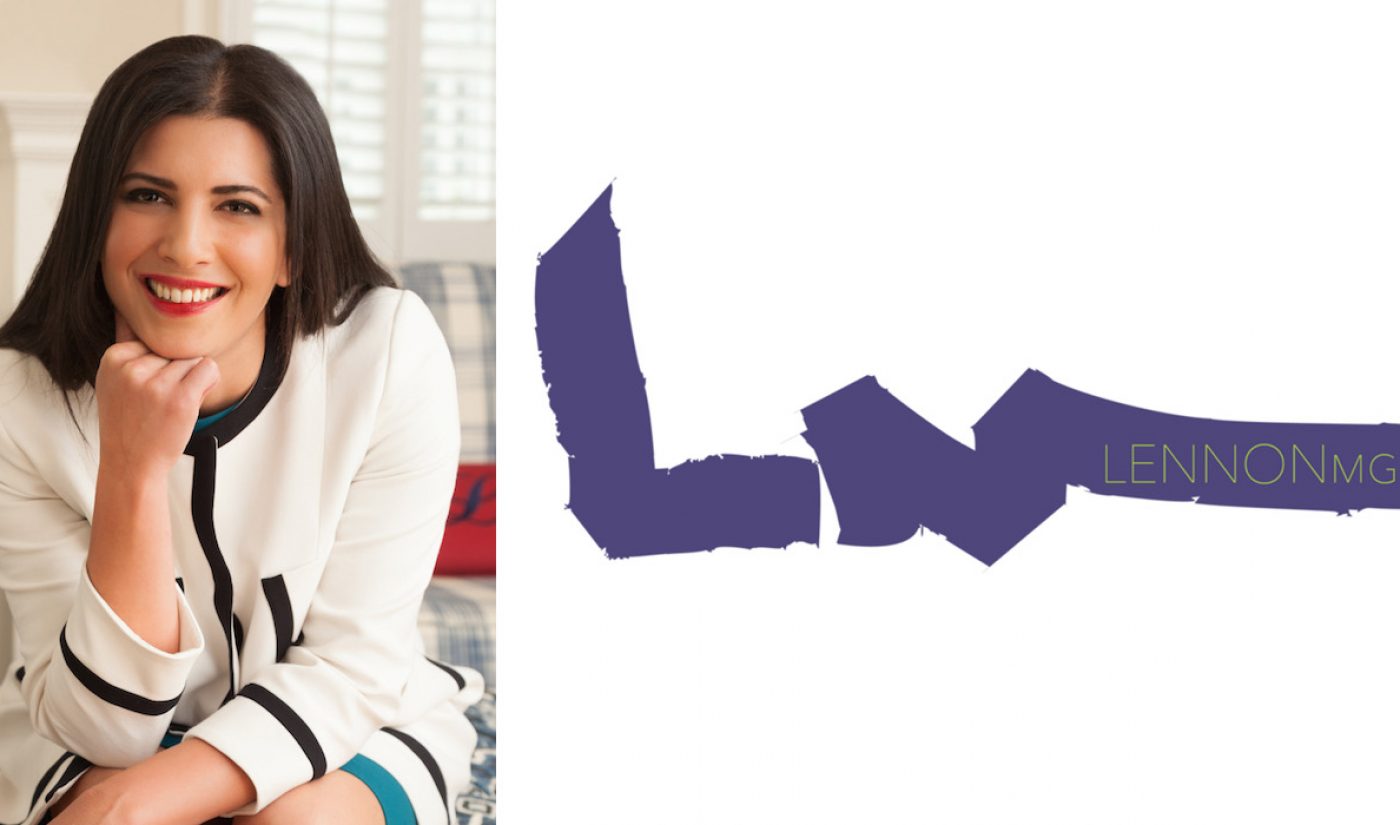 As the status and influence of social media stars and online video celebrities increases (by way of New York Times Bestselling books, sold-out international tours, retail clothing and makeup lines, presidential interviews, primetime television shows, #1 iTunes movie sellers, and innumerable branded entertainment deals), so to have the size of their teams. In your normal, everyday entertainment news cycle it’s not uncommon to read about an individual who gained incredible popularity online build out his or her entourage by joining a YouTube multi-channel network, signing with a major Hollywood talent agency, or having another member of his or her crew broker a high-profile deal. But that wasn’t always the case.

Before entire new media entities devoted to talent management existed and MCNs became de facto managers for the talent behind the channels within their networks, there were a handful of prescient independent managers who saw an opportunity in digital. And Naomi Lennon may have been the very first.

The CEO of Lennon Management has worked with established YouTube and social media stars since way back in 2008, when YouTube itself was still a burgeoning entertainment platform. From Alphacat to RCLBeauty101, Eleventhgorgeous to Therackaracka, Lennon currently works with a Jerry Maguire-sized roster of 15 or so clients who rack up well over 100 million aggregate views a month on YouTube alone.

The 1996 movie reference isn’t apt just because of the length of Lennon’s talent roster, but also because of the relationship she has with her clients. “It’s a mix of business and best friends,” Lennon explained. “My whole world revolves around my clients.”

And it’s that attitude, along with the boutique size of her company that allows her to care more about and work more intimately with the names on it, arranging initiatives like Secret’s multi-video, video advertising, and in-store display campaign with Eleventhgorgeous, Alphacat’s roles in commercial campaigns and feature films, AT&T’s Guinness World Record-breaking selfie shoot with Mark E. Miller, RCLBeauty101’s upcoming merch line with sick LA street artist Sand One, Joey Graceffa’s scripted Storytellers series, Fanatica’s touring brand (which is currently putting on Tyler Oakley’s Slumber Party Tour), and many other creative and lucrative deals.

We recently caught up with Lennon to talk  about how she first got into the business, how she discovers and cultivates, and the role of managers in an ever-changing  digital entertainment landscape:

Tubefilter: How’d you first get involved in the online video space?

Naomi Lennon: Originally, I worked for Mindshare as a media buyer, but then a friend took me to Just For Laughs in Montreal and I fell in love with comedy. I got a job at a small talent management shop and worked with comedians like Rick shapiro and Jonathan Daniel Brown. It was in 2008 and I was looking for talent wherever I could find it. I saw Barely Political online, liked their videos, reached out and signed one of their head writers.

Then I ended up getting a job with Comedy Time. They were distributing these standup comedy videos with cellphone carriers and were one of the first 50 or so YouTube channels to become part of the partner program. They sent me to the first-ever VidCon in 2010 as their representative. I met everyone there. I signed up Brittani Louise Taylor and worked with The Fine Brothers for a short time, too, after hanging out with them and being one of the only talent managers at the event.

TF: How’d you transition from the comedy scene to online video?

NL: I  was the only independent manager in LA that anyone really knew about. Before MCNs had their in-house talent teams, they’d reach out to me to handle some of their channels. I’d get a lot of inbound requests, but I’m particular. I only signed up a few of the channels that came my way, but it was enough for me to start out on my own.

That’s how I started working with EleventhGorgeous. And people like Joey Graceffa I discovered on my own. I signed Joey Graceffa when he was about 300,000 subs. I couldn’t believe no one had spoken to him. He was 19 and it was obvious to me he was going to be a huge star.

TF: How do you discover new talent?

NL: I originally watched a LOT of YouTube. I think traditional Hollywood thinks YouTube is very vast and it’s hard to find everyone, but what you realize once you’re into it is that it’s a small community. So, once you’re connected to some of the major talent it’s easy to get in touch with the rest.

It’s becoming harder and harder to find talent early on, though. It’s harder because the MCNs are signing up so many smaller channels under management contracts. It’s more difficult to get in touch with some of the rising stars, but there are still overlooked ones out there. And being able to find that new talent is one of the most important lessons I learned early on in my career.

You have to dedicate yourself to the clients you currently have, but you also need to be able to find new ones. It’s really important and makes you a better manager all around. If you’re not comfortable with your ability to find new talent, you’re going to be too concerned with holding onto the talent you already have. You can get sucked into doing what they want and not necessarily doing what’s best for them. You have to be able to deal with those disagreements that come up.

TF: What makes you want to work with a particular creator over another?

NL: There’s a spark, or a light switch flips on and I can visualize how to develop them and how to market them. I have to be able to see that and be motivated to do it.

There are a lot of channels that have fantastic numbers and are doing great things, but I’m not inspired at all. I can’t work with them because I’m not inspired. I’ve turned down working with some big clients with big numbers. I’m very open and I’m not adverse to telling the truth and telling a creator how I really feel about them and their work. I think it’s something that most people in the business don’t do. It’s a character trait that’s worked in my favor and worked against me, but I just can’t not be honest. I have to say “No” a lot

I can see the quality of their videos and where their brand could be, and I can see that they’re stars or have that star quality. We’re in a new industry, so there’s a lot of talent that have great videos and great followings, but they’re not stars.

You know everyone originally came to Hollywood to be actors. But then some people became producers, some directors, others editors. Right now, with YouTube stars, that’s their only job. There are a limited number of other roles for them right now. But a lot of them are multitalented and they’ll wind up doing other jobs and will find their roles in the industry as it matures.

TF: What’s your pitch to a prospective client?

NL: I listen to what they want to do. Instead of pitching to them I prefer them to speak to me. I need to know what they’re about, who they are, what their values are. That’s so corny, but it’s true. And if there’s an alignment there and I think that we’re able to work together and I think there’s some sort of connect, then I’m honest in what I can do for them. I let them know what I‘ve done and what I think they should focus on.

TF: What about your pitch to a brand that wants to work with one of your clients?

NL: The brand usually wants to do a campaign and they’re usually unaware of what that campaign actually entails, but they know they want to do something. I’ll work with the brand and let them know what works best on that particular channel with that particular audience. I’ll figure out the brand’s objectives. Do they want to drive traffic? Brand awareness? Then I’ll pitch some ideas.

TF: What’re some of the bigger projects your clients have in the works?

NL: We’re producing a movie with RCLBeauty101 and she’ll be starring in a brand new docuseries airing this summer on MTV. Therackaracka are putting together a drama series. And we’re also working on a reality series about online video and social media stars and the teams around them. Stay tuned for more info on that. It’s going to be fun.