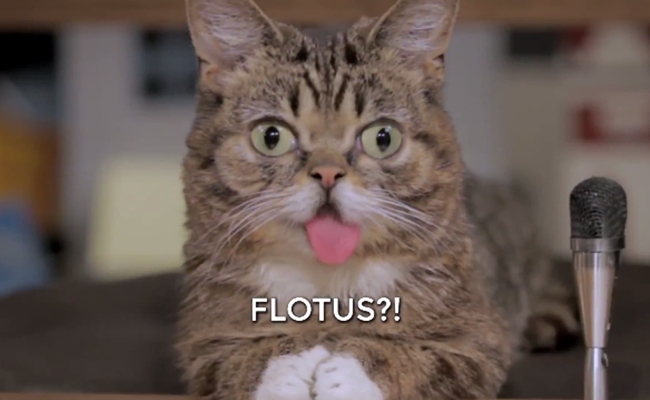 As she has looked to promote her healthy eating and education initiatives to young Americans, Michelle Obama has turned to the Internet. The First Lady’s friends within the online video industry include Tyler Oakley, Michelle Phan, and Billy Eichner, and she’s now joining forces with her cutest collaborator yet. As her Let’s Move campaign celebrates its fifth anniversary, FLOTUS has guest starred on The Lil Bub Show alongside adorable Internet cat Lil Bub.

On the latest episode of The Lil Bub Show, FLOTUS asks Bub to celebrate the five year anniversary of Let’s Move by coming up with five ways for kids to stay in shape. The celebrity cat one-ups the First Lady by showing off six different exercise routines in a montage that would make Rocky Balboa proud:

Lil Bub may seem like an unusual partner for the First Lady, but the three-year-old feline has experience serving as a political spokescat. She appears on the cover of “50 Bands & a Cat for Indiana Equality,” a compilation album that protests the controversial Religious Freedom Act in Bub’s home state. Profits from the album will be donated to local organizations that fight for LGBT rights.

Bub’s owner, Mike Bridavsky, understands how these political videos can rub fans the wrong way. “I got a lot of messages from [people],” he said, referring to the response he received to a 2012 post he wrote in support of women’s rights, “who explained that they come to Bub to get away from politics.” But Bub’s video with the First Lady is entirely harmless stuff. Anyone who doesn’t want Bub to get too political will calm down once she shows her adorable face.