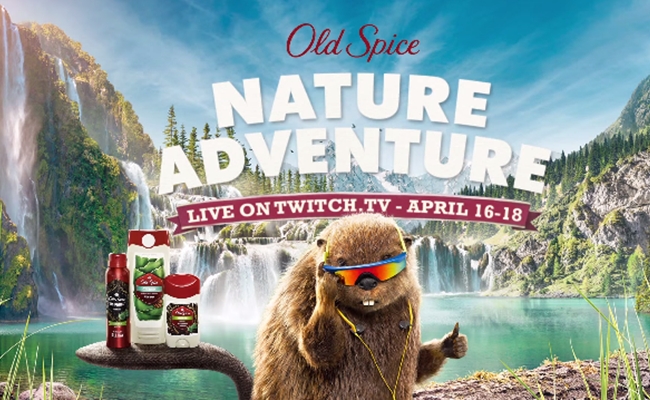 In February 2014, Twitch Plays Pokemon became a web-wide fad when it invited thousands of Twitch users to all control the same game of Pokemon at once. The result was both utterly chaotic and undeniably amusing, and the project has left enough of a legacy that brands are now trying to emulate it. On Old Spice’s official Twitch channel, viewers can control a real live human as he adventures through the woods.

Old Spice’s campaign is titled “Nature Adventure,” and it asks participants to provide actions for an on-screen personality. “This man we have placed in the bounteous grandeur of nature is contractually obligated to do everything you, and millions of other Internet users, tell him to do,” reads the deodorant brand’s Twitch page. “Use the chat feature to send whatever commands you want the man to perform. For example: give that antelope a massage, build a sundial out of those snack cakes or eat those strange berries could be commands you decide to use.”

Beginning on April 16th, Twitch users have three days to command Old Spice’s avatar. An article from Digiday notes how the resemblance to Twitch Plays Pokemon is not just coincidental. Wieden + Kennedy, which worked with Old Spice on “Nature Adventure,” cited the viral gaming fad as inspiration for the campaign.

Old Spice is one of several brands  making use of Twitch, which was purchased by Amazon in August 2014 for $970 million. Recently, we also saw HBO use the live streaming platform to promote the second season of Silicon Valley. As Digiday explains, advertisers are drawn to Twitch because of its ability to reach a young audience that can often be elusive to brands. The users who watch Twitch’s signature video game live streams make up the target audience brands like Old Spice are aiming. Because of that, we can expect many more campaigns like “Nature Adventure,” assuming this guy makes it out of the woods alright.