Jerry Seinfeld On Why He Likes Going Digital, Loves Crackle, And Hates YouTube 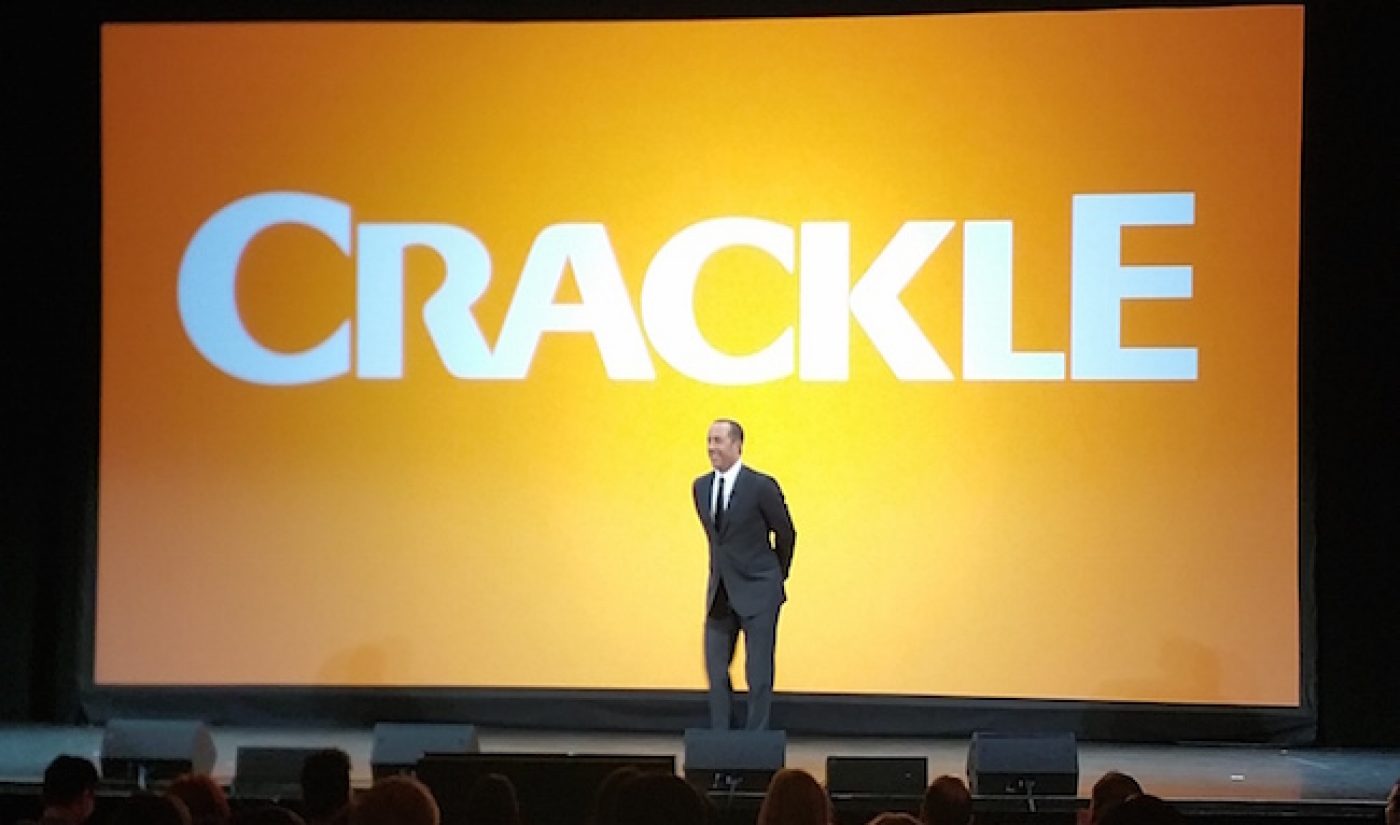 Jerry Seinfeld took the stage at the Hudson Theater on April 14, 2015 to kick off Crackle’s NewFront Upfront. And before one of the most successful comedians of all time introduced the executives at Sony and the company’s new media studio, destination site, and distribution platform, Seinfeld explained to the audience full of advertisers and marketers a simple comedy rule he’s learned after nearly four decades of being in the business.

Here’s the gist: If you’re on stage performing and there’s an elephant in the room, you have to address it. You have to call attention to it and acknowledge it so you and the audience can move past it and onto other topics. Otherwise, it’s all anyone’s going to be thinking about while you’re trying to get on with the rest of your show.

After the #ComedyProTip, Seinfeld then called out the elephant in the room. Why would an individual behind one of the greatest shows in television history and the recipient of at least one Primetime Emmy, one Golden Globe, a few dozen nominations in those and other major awards shows, and hundreds of millions of dollars leave the medium that made him famous and go to Crackle? Why would he put his time and energy into producing and promoting six seasons (and probably more) of his hit web series Comedians in Cars Getting Coffee for an online video platform and audience?

Here’s Seinfeld’s answer, dutifully transcribed in its entirety by yours truly from my seat in the orchestra of the theater. All emphasis is my own:

The big question you all have right now is, “Hey, why is he on Crackle when he could be at a lot of other places?”

I did a TV show. I loved that experience. I really had the full experience that you could have on TV. And I thought if I wanted to do something else, I wanted to be a part of inventing a new experience for viewers. I came up with this idea for a show. I didn’t know if it was even a show, but I went to every place, every digital platform, entity, company that has anything to do with the internet. And I told them I wanted to create a TV show that’s on the internet. Because what is the internet? It’s a way of reaching people? We’ve been doing this show at Crackle for a few years now, but for me, it’s really television. Because “tele” just means to transmit. “Vision” is pictures. It’s just an easy, simpler way really to put a show out there without a lot of complexity.

That’s the other thing I found at Crackle. I talked to Steve Mosko, the head of Sony [Pictures Television], about this show. He said, “I could sell this show today, anywhere on television. And there’s not anywhere that wouldn’t screw it up.” And he’s right. When you get to a certain point in the business, what a man is looking for in a network is the same as in his underwear. A little bit of support and a little bit of freedom.

That’s exactly what Crackle offered. We’ve been doing the NewFront thing, the digital blah blah. And these guys figured it out. There’s nothing different about what we’re doing than what anyone else is doing on any media anywhere. TV networks are worried that you’ll figure out TV is over and there’s nothing special about it. That’s why I’m at Crackle.

We’ve reached 100 million viewers this month with Comedians in Cars. So that’s pretty much it. I wanted to be here to be out in front of this company and out in front of what we’re doing because it’s exciting to invent a form of show that hasn’t existed in a medium that hasn’t been used quite this way. And I get so much support from them and we have such a good time that I wanted to be here to explain it to you.

Then Seinfeld asked the audience if anyone had any questions. The crowd was hesitant at first, but then hands began to raise.

Is there anything you’d like to ask me? I’m a guy who did NBC and now I did this, so I know both sides of this coin. So what would you like to ask me?

Question from the Audience: How do you choose the cars in the series? [The audience laughed, but Seinfeld obviously liked the question and answered it seriously.]

Jerry Seinfeld: I pick a car that goes with the comedian, that reminds me of the comedian. I did a show with Jim Carrey with a Lamborghini Countach. He’s a visual comedian so I got a visual car. Tina Fey I got an old Volvo. Because she’s solid and reliable and you’re in good hands with Tina. I used an old VW Bug with Larry David because I thought two rich guys in that car would be a good idea.

Q: Do you see yourself being a mini studio going forward, involved in lots of different projects?

JS: Yes, we’ve been talking about that. Imagine if there was a place on the internet, just speaking about my stuff, if you could go to one place to watch any Comedians in Cars, any Seinfeld, and any standup I’ve done in my years. That’s what people that get to a certain point in the business are looking for. Here’s the whole world of this guy you like.

I’d like to be involved in some other things. I’ve found the internet to be the most freeing experience I’ve ever had. We had a lot of freedom in television in the 90s, but nothing like this. The public loves it and is surprised by it. They don’t expect quality programming [online], and we feel like we’re ahead of a lot of places. You can be in the same world as cat videos and still deliver a great demo for the advertiser. Acura is pretty excited because they get Super Bowl numbers on an internet show.

Q: What’s something about you the public doesn’t know?

JS: Just about everything. It’s all artificial and that’s how we make money in this business. We fake everything. [The audience loved this answer. There was a bit more, too. I was too busy taking some pictures – like the one above – to transcribe the rest. It mainly had to do with how he’s always busy and working on various projects, but everyone still always asks him, “What’s next?”.]

Q: Do you think user-generated content is going to play a big part in this space?

JS: The less the better. I don’t want to see this crap. We have a giant garbage can called YouTube for user-generated content. We’re trying to generate a little higher level. I think showbusiness is for talent, that’s who should be in it. But let’s keep it in its hierarchy. And I like being at the top of the pyramid.

Season Six of Comedians in Cars Getting Coffee is scheduled for a June 4 release and will feature Stephen Colbert, Bill Maher, Steve Harvey, Julia-Louis Dreyfus, and Trevor Noah in automobiles and coffee shops next to and alongside Seinfeld. You can catch it then at ComediansInCarsGettingCoffee.com and Crackle.com.