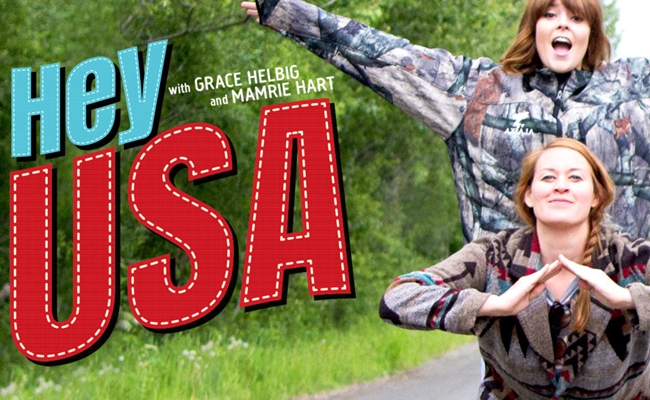 Season Two Cast Of “#HeyUSA” To Include YouTube Stars Tyler Oakley, Flula, Others

Mamrie Hart is hitting the road, and we now know the five YouTube stars who will accompany her on the various legs of her journey. Tyler Oakley, Jenna Marbles, Flula Borg, Kingsley, and Colleen Ballinger will all join Hart as she takes a trip around the country for the second season of #HeyUSA.

In the first season of #HeyUSA, which debuted in July 2014, Hart and co-star Grace Helbig toured the nation, with their stops selected by fans. This time, Helbig can’t join the road trip because she is busy with her upcoming E! program, The Grace Helbig Show. Instead, she will pick the locations to which Hart and her compatriots will travel.

When Hart and Helbig announced season two of #HeyUSA, they asked their fans to vote for the YouTubers they’d like to see among the show’s cast. All five of the content creators they selected have collaborated with Hart in the past; in particular, Oakley, Borg, and Ballinger (the creator of Miranda Sings) have previously guest starred on Hart’s You Deserve A Drink web series.

“I am so excited to hit the road with these YouTubers, especially since we’ve never traveled together before,” said Hart. “There might be hijinks, there might be drama, but there will definitely be…. vodka. Especially since Grace Helbig is in charge of my destiny. Truth be told, the more I talk about this, the more I am regretting this entire dynamic.”

The second season of #HeyUSA will be produced by Astronauts Wanted and sponsored by Hilton Hotels & Resorts. New episodes will debut on Conde Nast’s The Scene platform before they arrive anywhere else, with the first installment slated for a April 16th debut.