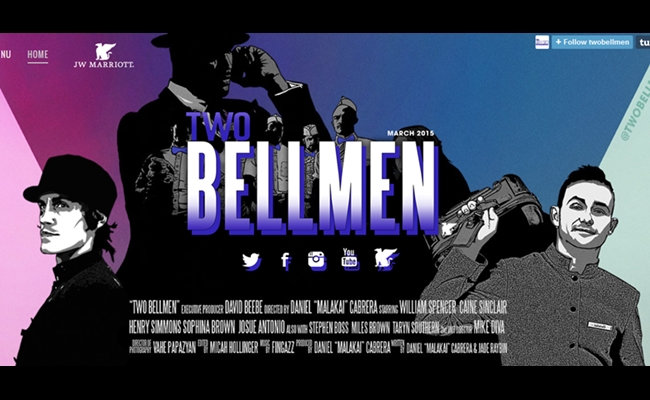 When Marriott first announced its digital studio back in September 2014, VP of Creative and Content Marketing David Beebe explained the plan was “to be the Red Bull” of the hotel industry. With its latest release, Marriott Content Studio has offered its most Red Bull-ish video yet. The hotel chain has released Two Bellmen, a short film created in partnership with Substance Over Hype.

Two Bellmen follows a pair of Marriott employees as they look to stop an art heist at their hotel. The film, which debuted a trailer last month, has now arrived on its own YouTube channel:

Substance Over Hype is a collective of active people, and its focus is apparent through Two Bellmen. Much of the film is devoted to impressive stunt work and action choreography, with hotel items like keycards and luggage carts often serving as improvised props. The script is filled with fast-paced quips, and stars William Spencer and Caine Sinclair bring frenetic, high-energy performances to the titular roles. The extreme sports attitude is certainly reminiscent of the Red Bull videos Marriott wants to emulate, but Two Bellmen resembles a Jackie Chan movie more than anything else.

“Two Bellmen combines music, movement, and talent from TV, film, and digital to tell an entertaining story where the brand simply plays a character,” said Beebe in a press release. “Marketing as interruption is over, and Two Bellmen propels our strategy of providing entertaining and informative content that adds value and helps build a community of people passionate about travel who ultimately drive commerce for Marriott’s global brands, such as JW Marriott.”

More information about the film is available on its website.