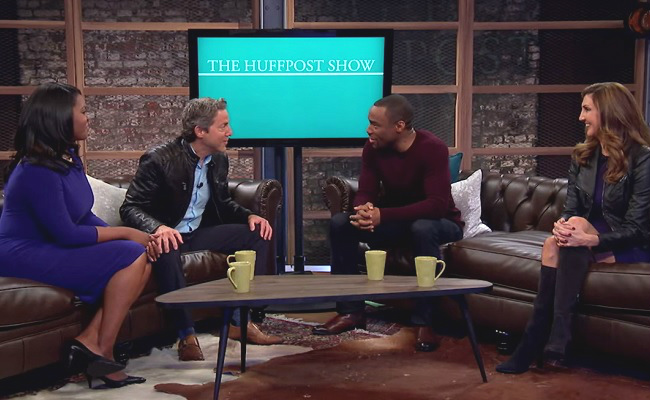 The Huffington Post To “Join The Party” With Satirical News Show

The Huffington Post is expanding its video content beyond its live streams on HuffPost Live. The Hollywood Reporter reports the AOL-owned online media company will premiere the primetime satirical news and entertainment segment The HuffPost Show on March 27, 2015.

The hour-long The HuffPost Show will be filmed in Los Angeles and aired weekly on Friday nights at 9 PM EST on Huffington’s home page, as well as across the HuffPost Live network. The news show will be hosted by HuffPost Live’s president and co-founder Roy Sekoff, along with Live’s veteran host Marc Lamont Hill. Sekoff said Huffington Post’s first foray into primetime programming will cover a range of topics, but will often infuse comedy into controversial stories to alleviate tension.

“Huffington Post has always had a dual mission: to entertain and inform,” he said. “Humor can’t say everything, but it can say some things better.” Through The HuffPost Show, Sekoff wants to “join the party” of satirical news television programming previously dominated by the likes of Jon Stewart and Stephen Colbert.

Sekoff also explained The HuffPost Show will be created with shorter video segments in mind, which can then be distributed across The Huffington Post and AOL properties. Additionally, Sekoff said The HuffPost Show will have a “rapid response” team that will prepare Vines, tweets, and YouTube videos related to news items from throughout the week. This digital content will help TheHuffPost Show stay on top of breaking stories outside of its weekly live segment.

“[The digital initiative] creates a two-way interaction with our audience that I don’t think others in the space have,” Sekoff said. “It creates this pinwheel of content that feeds into the mothership on Friday night.”

The HuffPost Show is only one of many new digital news shows to pop up in the last few months. Others, however, are much shorter than HuffPo’s hour-long program. ABC News, for example, debuted the one-minute, Facebook-exclusive newscast The One Thing in December 2014. More recently, The Huffington Post’s parent company AOL launched its own two-minute morning news segment called Rise.

You can catch the first episode of The HuffPost Show on March 27 at 9 PM EST via The Huffington Post and HuffPost Live sites.