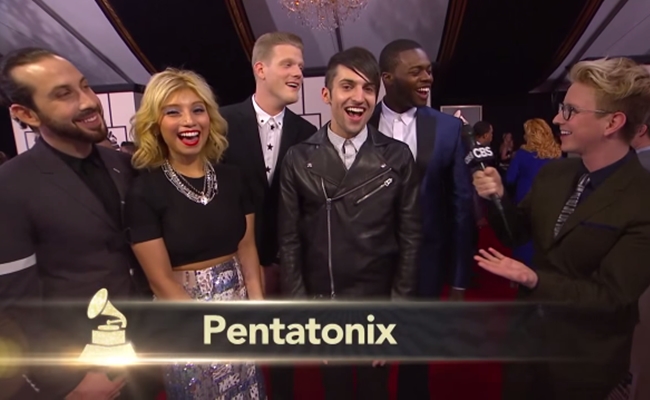 During last night’s Grammys, YouTube’s most popular musical quintet took home their most prestigious award to date. Pentatonix, whose a cappella videos have gathered 7.5 million subscribers and 832 million views online, earned a Grammy win for their mash-up of Daft Punk songs.

Pentatonix’s Grammy win came in the Best Instrumental or A Cappella Arrangement category, where they beat out four jazz artists. Video of the ensuing acceptance speech is available via CBS‘ YouTube channel:

After the show, Pentatonix–which consists of members Scott Hoying, Mitch Grassi, Kirstie Maldonado, Avi Kaplan, and Kevin Olusola–chatted with fellow YouTube content creator Tyler Oakley, who conducted interviews as one of CBS’ Grammy correspondents. Oakley described himself as Pentatonix’s “original fan” and claimed to have re-blogged their videos “forever.”

Oakley also took a turn at the Grammys’ GlamCam, and he wasn’t the only YouTuber who did. DJ Flula Borg, who attended the award show as part of E!’s red carpet coverage, showed off his best Matrix moves at the 360-degree camera booth.