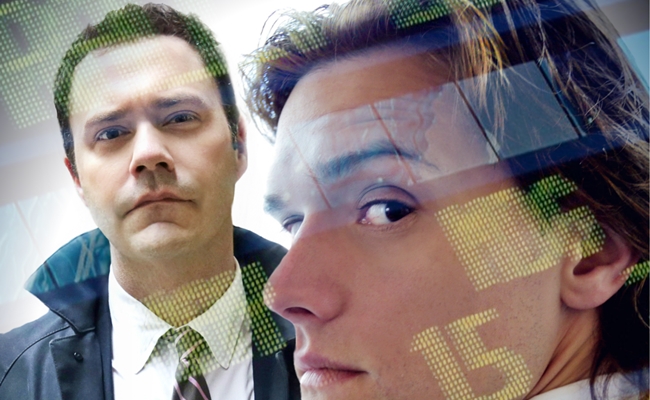 SPiN stars Cleveland and Hartley Sawyer; the two actors previous led Cleveland’s previous short film, Kept Man. This time, instead of appearing as a psychotic lover, Sawyer is a Wall Street egomaniac who plays it cool during an interview with Cleveland’s TV journalist. The result–which can be viewed on Cleveland’s YouTube channel–is filled with Sorkin-esque banter, political intrigue, and just enough sexual tension.

Cleveland and Sawyer have become frequent collaborators, and SPiN represents the latest chapter in their “bromance.” During the filming of SPiN, I joined the film’s two stars on set to talk about their past, present, and future work:

Cleveland is perhaps best known for creating web series like The Temp Life and Leap Year. His co-writer for those two series, Yuri Baranovsky, also teamed with Cleveland to write SPiN. We’ve seen Sawyer in notable web projects as well; he played one of the leads in Caper, which debuted on Geek & Sundry early in 2014. SPiN is a strong addition to its two stars’ respective repertoires, and with its punchy dialogue and fast-paced wit, it’s a lot of fun for viewers as well.