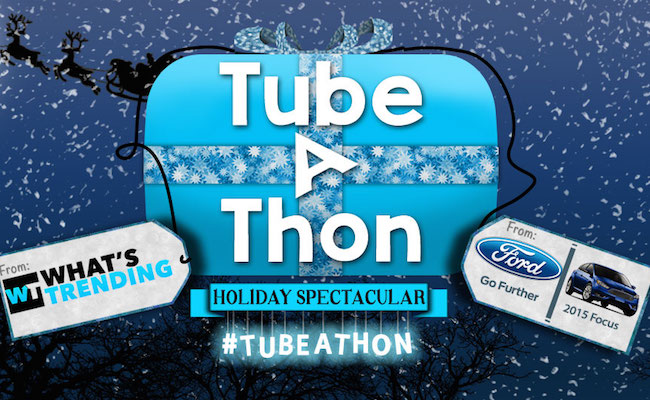 What’s Trending recently held its Third Annual Tubeathon during which the self-described “24/7 news hub, covering and curating the most viral and shareable content across the social web” encouraged its audience and online video viewers at large to tune into a star-studded two-hour live streamed event and get into the holiday spirit of giving.

From 10PM ET to 12 Midnight ET on December 11, 2014, What’s Trending’s own Shira Lazar and a cavalcade of recognizable names and faces from traditional and digital entertainment (including, but not limited to Karmin, Drea de Matteo, Trevor Moran, DeStorm, King Bach, Glozell, Brittany Furlan, Jessie Smiles, and Logan Paul) appeared on screen straight from Siren Studios in Hollywood, California and asked individuals to support Covenant House by way of Twitter. What’s Trending and its corporate sponsor for the evening, Ford promised to donate $1 to the charitable organization (that provides shelter, care, and other essential services for homeless youth the Americas) for every single tweet posted with the hashtag #Tubeathon during the 120-minute event.

All in all, Tubeathon 2014 grossed approximately 53,346 tweets (up from the 41,777 tweets the initiative amassed last year), which means the Covenant House will soon receive $53,346 more dollars to help it further execute its altruistic mission.

“The What’s Trending 3rd Annual Tubeathon was a great opportunity for the next generation of stars to reach their community and shed light on The Covenant House’s important mission to end youth homelessness in America,” said Lazar in the release. “These influencers proved the power of using digital tools to connect with their audience in real-time to make a larger difference for those in need.”

But the 3rd Annual Tubeathon isn’t over yet. A cut down version of the event is set to air on television on December 21, 2014 by way of AXS TV. Be sure to tune in.