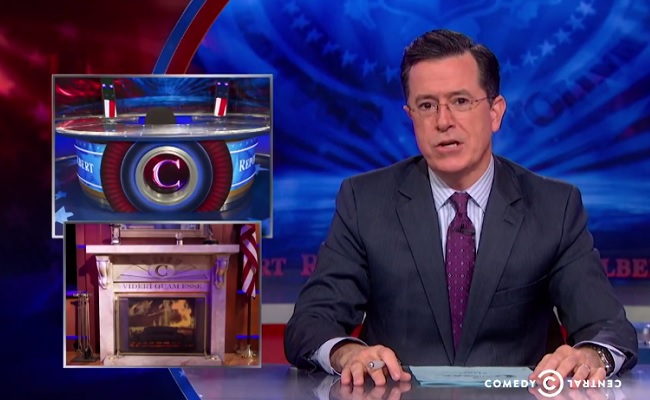 The final episode of The Colbert Report is approaching fast, and crowdfunding site Omaze and Stephen Colbert want to get the studio cleaned out. They’ve teamed up to raffle off some of the most iconic set pieces from Colbert Report with proceeds going to the Yellow Ribbon Fund and DonorsChoose.Org.

The online masses can enter the raffle by donating a minimum of $10 to Omaze’s online campaign. Once entered, participants have a chance of winning one of several items from The Colbert Report set (yep, the one that was just featured in YouTube’s 2014 Rewind video). The first place winner will receive Colbert’s unique C-shaped desk, and the second place winner will get his fireplace, mantle, fireside tools, armchair, rug, hourglass, flag, TV monitor with a virtual yule log, and the fifth anniversary Colbert portrait.

Entrants can donate as many times as they want with each $10 donation giving them another chance at winning. The raffle is over on December 17, 2014. The money will be given to Yellow Ribbon to help better the lives of injured military personnel and their families, as well as to DonorsChoose.org to help make classroom projects in needy schools come to life.

Nation, as you know the Colbert Report will be going off the air soon because I’ve won TV. I’ve measured my garage, and unfortunately, it won’t fit both my car and a working TV studio. So I’m raffling off two of the most beloved parts of my set for charity. The iconic C-shaped desk is not only copyrighted, but serves as its own copyright symbol. And the fireplace hearth comes with a leather chair and portrait featuring (L-R) me, me, me, me and me. Either way, a part of the Colbert Report will live on in your heart, your home, or possibly your storage locker.

This isn’t the first time Colbert has teamed up with Omaze for a good cause. The political satirist helped the fundraising site with the Star Wars: Force for Change campaign by having a Star Wars trivia showdown with fellow TV host Jon Stewart. Omaze also has a history of partnering with adored pop culture and digital icons, and has previously raised money for charity with people like Hannah Hart, Arnold Schwarzenegger, and Epic Meal Time.

Check out the video below where Colbert asks “Steve” (aka himself) to announce the charity raffle with the aid of a lovely Vanna White-esque assistant. If you think Colbert’s C-shaped desk would look epic in your home (and let’s face it – where wouldn’t it fit in), make sure you visit Omaze.com/Colbert to donate and enter for your chance to win the piece.