YouTube Millionaires: Richard Ryan Is “Only Getting Better From Here” 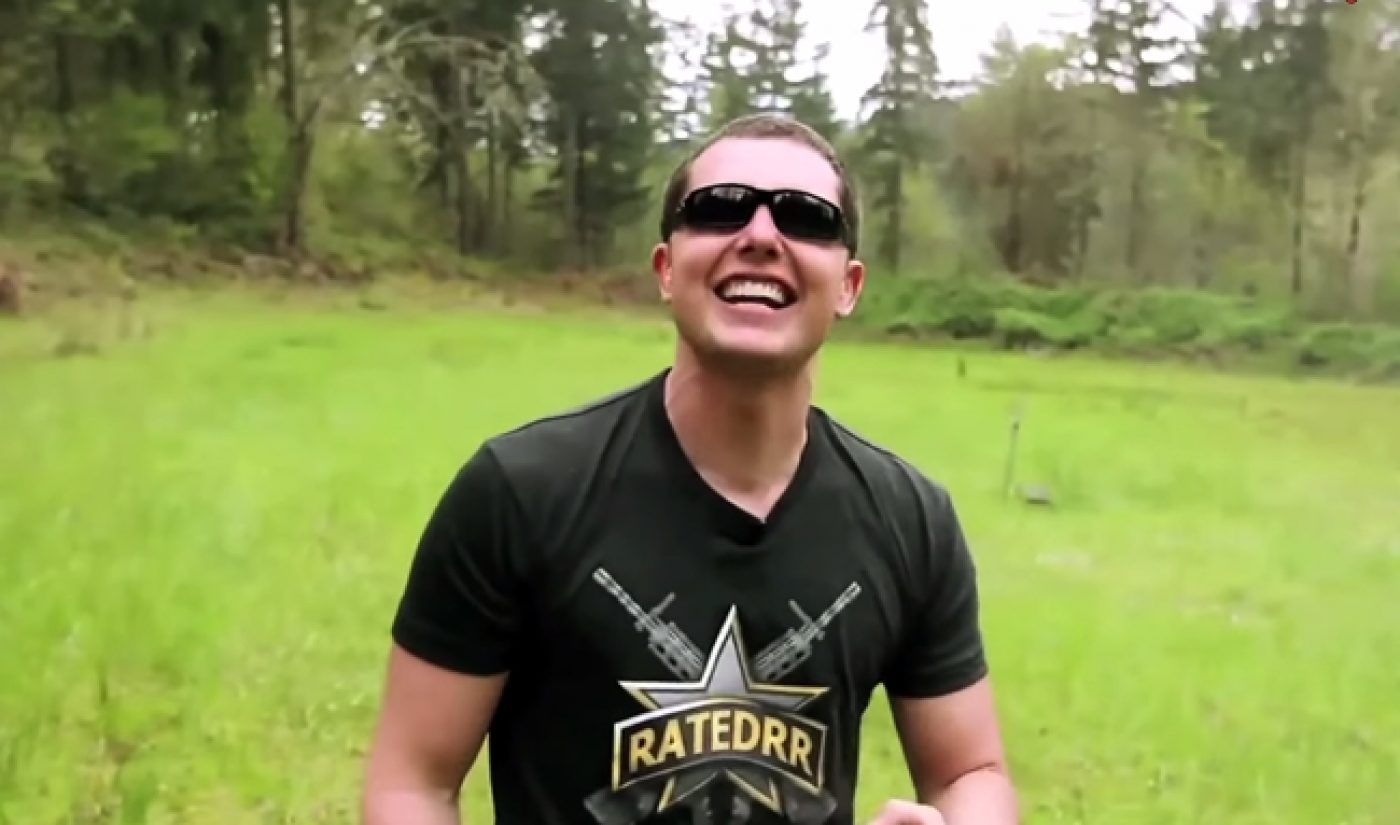 The “Tech Assassin” is blowing up. Richard Ryan, who posts firearm and explosives videos to his RatedRR channel, has now passed one million subscribers. Ryan, who is partnered with Discovery Digital Networks, has developed several signature series, including Tech Assassin and The Breakdown. Ryan recently re-branded his channel as FullMag, though he has continued to churn out badass stunts that make use of powerful weaponry. As he continues to bring his wrath upon all manner of gadgets, Ryan took some time to answer a few questions about his channel.

Richard Ryan: I’m truly honored. I’m overwhelmed when I go to conventions and expos and there are thousands of people there. I can’t really comprehend tens of thousands, let alone hundreds of thousands of people clicking the subscribe button after watching one of my videos. It’s surreal and I am absolutely grateful for everyone’s support over the years.

TF: Why did you decide to start destroying technology in your videos, and how do you choose which gadgets to assassinate?

RR: I have worked with a lot of other channels early on since 2007. When TotallySketch took off into the top 100 channels, Mike (owner of TotallySketch) told me I should focus on my channel so he could drive his audience to mine when I was in his videos.

I saw early on how difficult it was to script and produce content weekly as well as how easy it was for creators to get burned out. I sat down and came up with a few show concepts that would give me a never ending supply of new ideas. [They were] Tech Assassin where I’d review  and destroy new tech, and The Breakdown where I’d take elements of movies and video games and recreate them in real life. I wanted to be able to wake up in the morning and not know what I’m doing next month, but be just as excited about it as I was when I first started.

RR: I’ve never seen myself as an “expert”.  Though I’m an instructor, I try to keep my opinions to myself on most my videos. I know a lot of guys respect my opinion but that is extremely subjective. What fits my hand, shooting style, weight preference and so on might be completely different than that of a viewer’s.  I do realize that not everyone has the ability to go try out things locally so I try to stay as informative and bring as much entertainment value to the videos as I can while leaving my personal preference opinions out.

TF: What is your favorite weapon you’ve ever used on your channel?

RR: Off the top of my head, I’d have to say the Dillon Minigun. If the sheer volume of firepower at 3,000 rounds per minute wasn’t impressive enough, I got to fire it while hanging outside of a helicopter.

RR: I used to do more verbally direct safety tips on camera, but given how my videos are edited, I don’t really include those anymore. The firearms community and the comments on videos do a wonderful job of emphasizing safe behavior. Trigger discipline is a great example. If a creator or guest is holding the firearm in an unsafe way the core audience does a good job of educating others through the comments.

I plan on incorporating more safety real soon but if viewers want to see some safety tips…I shot some safety tip videos with Jenna Marbles a little over 3 years ago. They were completely random and we were just looking for a reason to collaborate so we shot some stuff goofing around. I only put a couple of them in my videos. Maybe one day I’ll put the others up haha!

TF: On average, how long does it take to build a weapon and get it ready to use in a video?

RR: The setup varies depending on the shoot. Most shots are set up in a few hours, though some det cord shots take a couple days of preparation. The “Hacking Devices to Explode” and “iMac vs C4” videos took 2 months of work before the shoot, 2 days to setup, 1/2 day to rig explosives and 1/2 day to detonate and film.

TF: Why do you think slow motion videos have become so popular on YouTube?

RR: There’s something extremely captivating about a good slow motion shot. I think for some people it’s just sheer entertainment value but the scientific lessons learned from some shots is just unreal.

I’m really close with several slow motion camera manufacturers and we were just recently at a slow motion conference at Arnold Air Force Base and they were showing me a shot of a water droplet before a supersonic object struck it. On paper it might sound boring, but watching it at a million frames per second gave me cold chills. As the pressure wave reaches the water drop, ripples formed on the back side of it and the front was actually drawn to the pressure wave initially, instead of away. I don’t think I’ve ever spent as much time looking at one clip before. It was so interesting.

TF: What made you decide to start using Patreon, and has it afforded you more freedom with your videos?

RR: I absolutely love Patreon. The irony of the situation is that I’ve never actually charged any of my viewers for the different tiers yet. It’s weird because those are the people who really care about the videos I make, enough to the point of which they will pay me. So before I charge them, I want to make sure I’m pumping out videos where they see a clear difference between what I do on my own and what I am capable of with their help.

TF: What’s next for your channel? Any exciting plans?

RR: I’ve slowly been introducing my viewers to the concept of “FullMag” over the last year and a half. RatedRR has always been about me and what I wanted to do when I wake up in the morning. I feel like it’s time for me to grow as a creator and become something bigger than just “Richard’s excuse to go wingsuiting”.

I introduced FullMag last year to my core audience and changed my RR logo earlier this year. There’s a few reasons for that. One, I wanted a name that wasn’t so egocentric and was easy for people to say. Two, I wanted my audience to feel a part of something, collectively, without me having to label them. I understand why some creators label their audience and address them with a unique name for branding purposes, but I didn’t want to do that.

Dogs have been a major part of life from early jobs to more recent focuses on charitable causes. I felt like the wolf was a great way to represent myself, my viewers and our way of thinking as a pack mentality without having to give them a clever name. I made sure that when designing the logo that the RR was incorporated as a way of showing that it’s still me. Yes, things are changing, but it’s only getting better from here.

It’s extremely hard to grow as a channel or as a brand without the help of your audience or a 3rd party investor in the current online climate. For better or worse, I’m very stubborn about who and how I involve people with my goals as a creator. A lot of people don’t realize that slow motion cameras can cost hundreds of thousands of dollars and the firearms and explosives I use are bought or rented. Finding the right sponsors for content involving firearms can be tough, and it’s hard to pay your light bill off of Adsense, let alone the budgets for my videos without sponsors. At one point I was working 2 full time and 3 part time jobs just to support my YouTube habit.

It’s been a long road to get to the point of changing RatedRR to FullMag along with launching with my new website. In 2015 I’ll be introducing my viewers into several new hosts on /FullMag and /Guns as well as new shows and some really big surprises. I think the viewers will be glad I did it my way.