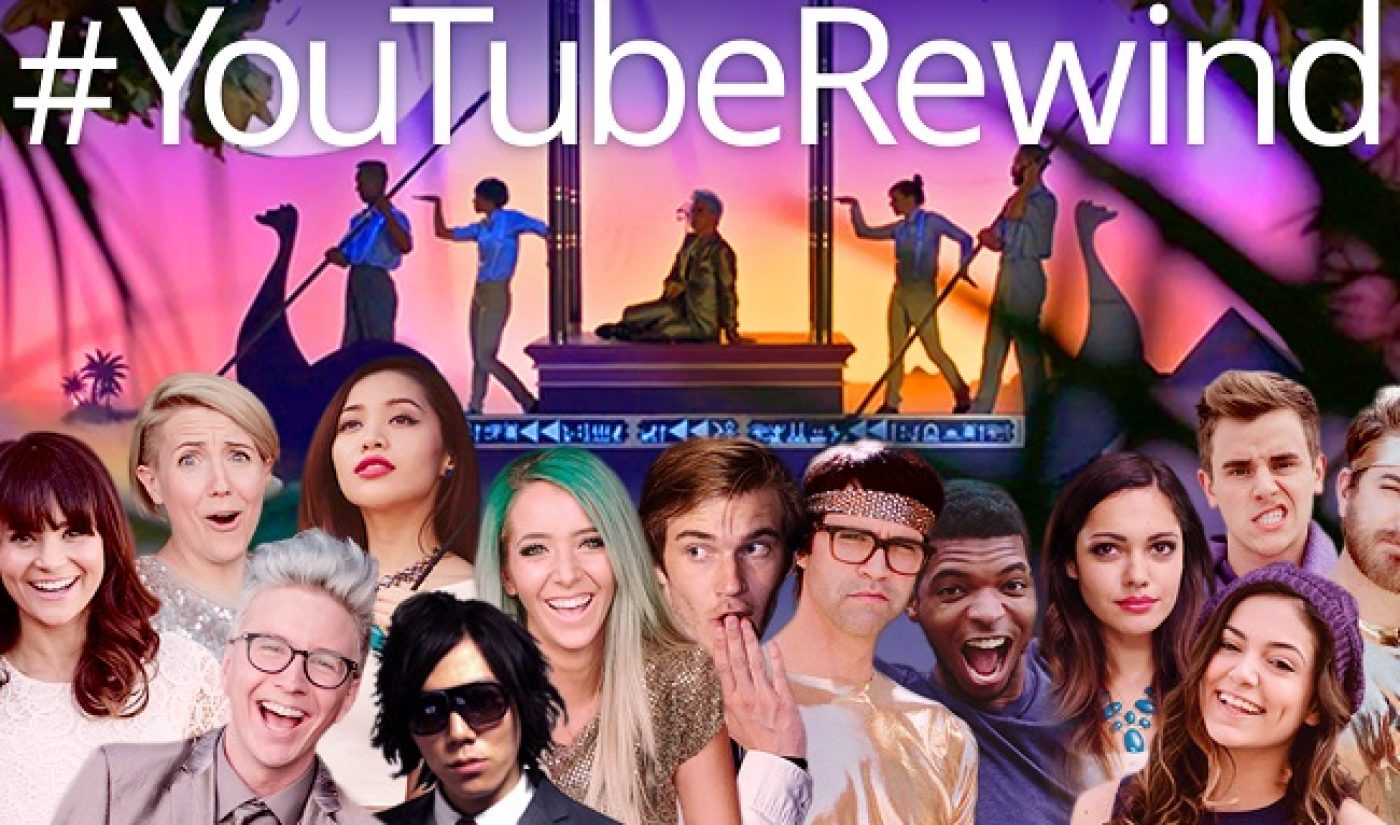 YouTube and Portal A have done it again. With just 22 days left in 2014, the world’s largest video sharing site and the digital production house have released YouTube Rewind 2014, the sixth iteration of YouTube’s wildly popular end-of-year summary videos. This year’s edition is on a grander scale than 2013’s, bringing together over 120 creators from around the world to re-create the year’s top videos set to this year’s top music.

Picking up right where 2013’s video left off, PewDiePie (real name Felix Kjellberg) heads to the rooftop of a city building, unzips his backpack, and pulls out the YouTube rewind logo he buried last year. He then belly-flops through the roof to the tune and in the style of of “Turn Down For What” (the DJ Snake and Lil Jon jam that’s the inspiration for the title of this year’s Rewind).

What ensues after is an epic journey across multiple countries, full of YouTube stars dancing away to 2014’s top tracks all spliced together by DJ Earworm (yes, that DJ Earworm), participating in the Ice Bucket challenge, freaking out at that Polish spider dog prank, taking selfies, singing “Let It Go,” and carrying the YouTube Rewind flag through the sets of Conan, Colbert Report, and Last Week Tonight with John Oliver and in Minecraft and Super Mario-inspired obstacle courses.

Portal A had the daunting task of sitting down and figuring out who and what to feature in the YouTube Rewind 2014 ediition. “We start by creating list after list of big moments, videos, memes, creators, songs, and viral stars,” said Kai Hasson, Creative Director of Portal A and Director of YouTube Rewind 2014. “We watch everything. It’s about diving in headfirst so that we can understand why something was a hit, and how it resonates with the people that love it.”

“At that point, choosing the who and what of our video is a mix of creative direction and production realities. Creatively, this year we wanted to emphasize that Youtube is an international platform, so a lot of our decisions were impacted by that. And there are a lot of other realities – creator availability, production constraints, music tracks we can’t use – sometimes our decisions are made for us.”

Here’s a complete list of the top ten videos from 2014 featured in the Rewind mashup clip as compiled by YouTube and Portal A based on views, shares, comments, likes, and more. All in all, these creators’ channels boast a whopping 21 million combined subscribers:

The 2014 Rewind video proved to be a large undertaking for Portal A which required months of work. “We started our initial planning in July,” said Hasson. “Then we spent about two months concepting and planning. Our first shoot day was in October and our last shoot day was in late November. Hopefully when you watch the video you get a sense of the scope and the amount of effort that went into capturing everything.”

Judging by the number of creators involved in the six-minute video, we’re not surprised Portal A and YouTube started to work on it about five months before upload. Here’s a complete list of all of the YouTube stars involved in the production, hailing from countries such as the United States, Germany, Japan, Israel, France, and more.

With the 2012 and 2013 videos both hitting over 100,000,000 views on YouTube’s Rewind channel, 2014’s Rewind video has a lot to achieve. However, Hasson isn’t concerned about the numbers. “After watching hours and hours of YouTube I only know one thing: the internet is unpredictable,” he said. “I would never forecast 100,000,000. Heck, I’m like Sir Fedora, happy when one of my videos gets a few likes.”

With all the moving parts involved in YouTube’s 2014 Rewind video, the finished product is an exhilarating celebration of video that’s sure to bring back plenty of nostalgia from the last 12 months. Check it out and make sure you watch until the very end to see some Hamster-eating-a-tiny-Rewind-button action and watch how the video should have ended.