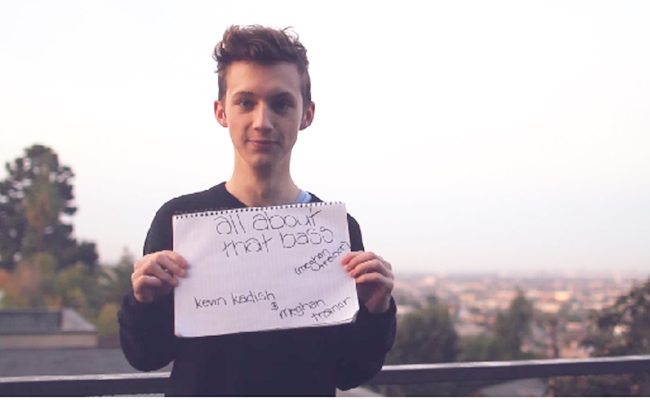 Nominations for the 2015 Grammy Awards arrived today, but instead of revealing all the nominees at once during a prime-time concert, the prestigious music award ceremony opted for a more modern approach. After Pharrell Williams and Ed Sheeran broke the first few names on CBS This Morning, specific celebrities appeared in videos on their respective Twitter feeds to announce the nominees for other categories.

Among these spokespeople was YouTuber, actor, and musician Troye Sivan, who revealed the contenders in the Song of the Year category. Sivan, who has nearly three million subscribers on YouTube and more than 2.1 million Twitter followers, introduced himself to the music industry this year by releasing his debut EP, TRXYE. The five nominees he announced are Meghan Trainor’s “All About That Bass”, Sia’s “Chandelier”, Taylor Swift’s “Shake It Off”, Sam Smith’s “Stay With Me”, and Hozier’s “Take Me To Church”.

The Twitter-based announcements are part of the Grammys’ broader social media strategy. Grammy voters are often criticized for being out-of-touch, and in order to fight that accusation, the awards ceremony has, in recent years, looked to the Internet. Young, hip stars like Sivan give the Grammys an opportunity to freshen up while announcing a bit of news along the way.

Most of the nominees have now been announced, though the contenders for the prestigious Album of the Year honor will be rolled out during A Very Grammy Christmas, a CBS special that will begin at 10 PM EST.