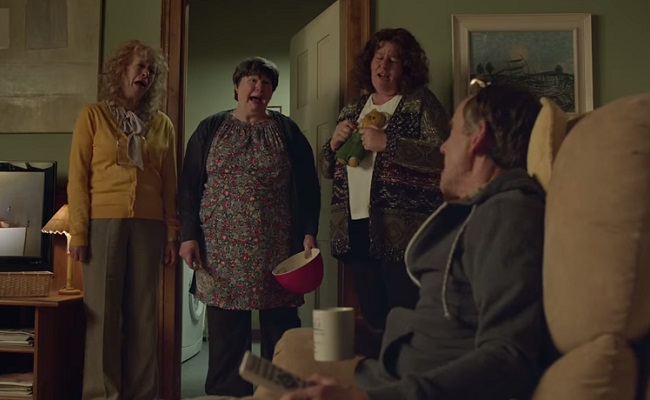 Old Spice has never failed to deliver clever advertising to the online video masses. Now, the hygiene products company has released a new video ad called “Dadsong” which is just as engaging as the American male grooming brand’s previous clips.

“Dadsong” debuted on November 24, 2014, and is part of Old Spice’s #SmellcometoManhood campaign. As noted on the company’s YouTube channel, the campaign promotes the idea that using the company’s body sprays could “cause boys to become men, girls to become girlfriends, and moms to become sad.”

In “Dadsong,” fathers and mothers are pitted against each other over their sons’ futures. The fathers are celebrating their sons’ maturation, saying “He’s a man!” But their wives express their unhappiness with all the changes, still missing their little boys. The fathers refute the whimpering women’s complaints with lines such as, “We’ll be using [our son’s room] for storage pretty soon.” Even the video’s description gets in on the argument, with the phrases “He’s a man!” and “He’s a boy!” repeated over and over again.

Written by Bret McKenzie of Flight of the Conchords and produced by Biscuit Filmworks, the “Dadsong” ad is a sequel to Old Spice’s “Mom Song” ad from earlier this year where moms stalk their sons because they think they’re too young to be men. The ad was also part of the #Smellcome campaign and has racked up over 9 million views on Old Spice’s YouTube channel.

Old Spice has always done well with comedic marketing. The company’s ads first became internet favorites because of the video “The Man Your Man Could Smell Like” starring Isaiah Mustafa. The company also created a series of ads embedded in websites selling fake products, with Mustafa’s character telling viewers to purchase Old Spice and stop wasting their time on unrealistic items.

If the 9 million views of “Mom Song” are any indication, “Dadsong” could do very well for itself. The ad should also help boost Christmas sales, though it may not be the mothers buying Old Spice’s products this year.