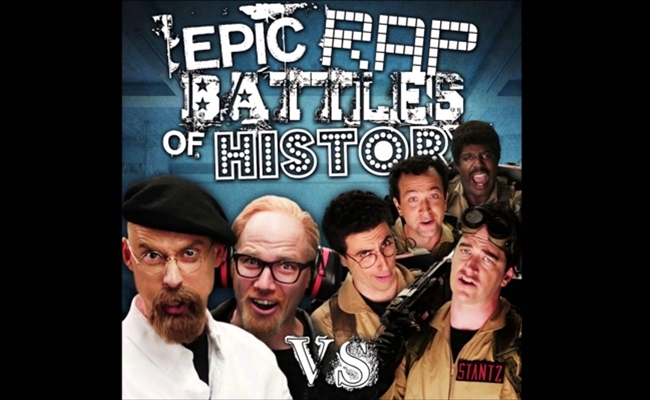 ‘Epic Rap Battles Of History’ Returns With Ghostbusters Vs Mythbusters

Season four of Epic Rap Battles of History is live. The newest installment of Nice Peter and EpicLLOYD‘s hugely popular YouTube series is a busy affair, as the four members of the Ghostbusters take on the cast of Mythbusters.

The episode’s matchup was spoiled during ERB‘s season four trailer, in which the ghost of Adolf History got busted. “We were really kind of getting sick of doing Vader vs. Hitler,” said Nice Peter in the new battle’s behind-the-scenes video. “There’s only so many weird Holocaust jokes we feel like making.”

Instead, Peter and Lloyd opted for what Peter called “one of the most popular suggestions since season one,” and as has become the norm with ERB it is full of guest appearances. Mark Douglass of Barely Political shows up as Ghostbuster Raymond Stantz; Mary Doodles shows up in a Kari Byron costume so accurate that I initially assumed Byron had agreed to play herself; an ERB fan named Walter Downing got a chance to join the cast as Winston Zeddemore; and Dodger shows up to shout this line. Those are only a few of the cameos among biggest cast we’ve seen in an ERB thus far.

Thanks to a quickened schedule, new episodes of ERB will arrive every Monday.