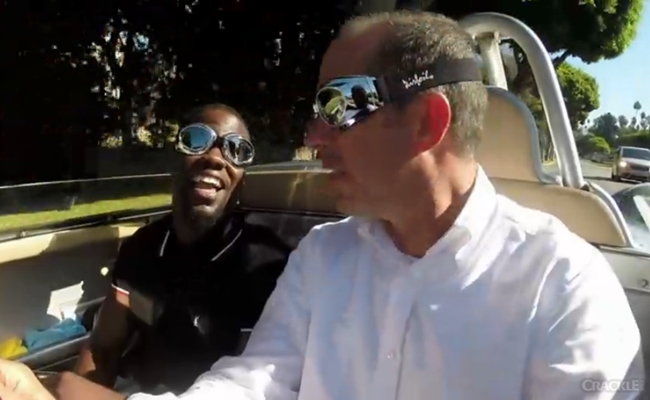 Comedians In Cars Getting Coffee has returned to Crackle, and Jerry Seinfeld‘s web series begins its fifth season with something a bit different. Instead of jumping into Seinfeld’s chat with guest Kevin Hart, the first episode begins with a self-aware back and forth between Seinfeld and “Crackle President Dick Corcoran,” a character played by Michael Richards.

At the beginning of the episode, Seinfeld gets a text message asking him to meet with “Corcoran”. One trip to Los Angeles later, Seinfeld finds himself in Corcoran’s office, where Richards explains how the Sony-owned platform is spending “half the budget” on Seinfeld’s show. He also compares Crackle to more visible competitors like Netflix and Hulu, outright stating “Crackle is dead.”

The bit with Richards is a self-aware preamble that also serves as Crackle’s way of saying “hey, we have other shows besides this Seinfeld thing, too.” To that end, the walls of Corcoran’s office are plastered with Chosen posters, providing a bit of product placement.

Perhaps the unusual intro isn’t your thing; if you’d like to get right to the actual episode, it begins at 3:55, and we immediately learn where all of Crackle’s money is going: Seinfeld’s first car of the fifth season is an incredible 1959 Porsche race car. Seinfeld shares his new ride with Hart, who joins him for Comedians In Cars Getting Coffee‘s typical combination of caffeinated beverages and amusing banter.

Crackle’s pre-show silliness aside, Comedians In Cars Getting Coffee is the same as always. If you are a fan of Seinfeld’s personality, it’s a must-watch. Otherwise, feel free to tune whenever he cavorts around town with a guest you enjoy.