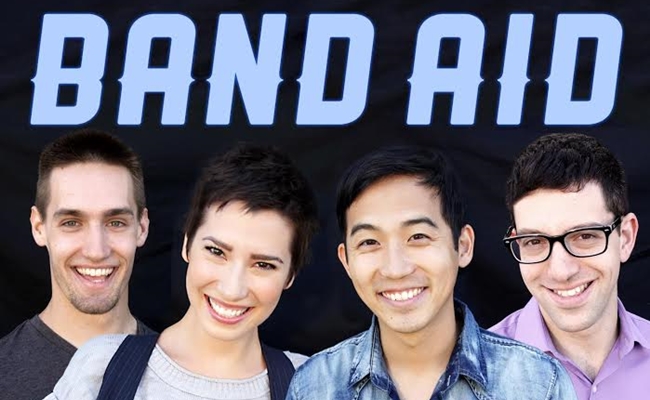 Jimmy Wong is going back to his YouTube roots. Jumping off his current turn in season three of Video Game High School, Wong has launched an Indiegogo campaign for Band Aid, a six-episode musical comedy series.

Band Aid and features a group of four ex-bandmates who reunite when lead singer Chase (played by Wong) launches one last attempt to win over his crush Jo (Abbe Drake) before she leaves town. Along the way, regular musical numbers will keep Band Aid lively (in the spirit of other musically-inclined comedic programs like Flight of the Conchords, Tenacious D, and Dr. Horrible’s Sing-Along Blog).

In addition to starring in the series, Wong will also direct it alongside Matt Enlow, who is best known as the creator of the hit web series Squaresville. Here’s a look and the pitch:

Wong – who is the brother of fellow YouTuber Freddie Wong – has always had an affinity for musical comedy. He first came to YouTube prominence in 2011, when he released a string of popular songs, the most viral of which is the “Asians In The Library Song“, a musical response to UCLA student Alexandra Wallace.

“Ever since my first few songs, I’ve always shied away from doing weekly, funny musical videos because I’ve wanted to do something bigger,” Wong told Tubefilter. “So, this is something I’ve been working on for the past couple of years and the timing now is perfect. We thought the best time to go live would be after VGHS, to continue the cycle of giving people something to look forward to.”

The Indiegogo campaign is asking for $52,400, though Wong said he hopes to raise $100,000. In order to help achieve that goal, Wong has an ace up his sleeve: A new car! In March, Wong appeared on The Price Is Right, where he won a 2014 Chevy Spark and several other prizes. Thanks to Indiegogo’s raffle feature, Wong will give away the car to one lucky backer chosen at random.

“The cool thing about the campaign is we want to make it something that people want to donate to,” explained Wong. “Everything in terms of prizes is associated thematically with the series, and on brand with the musical elements, like the Music Lesson with a Cast Member, or Your Own Song. Well, it’s either that or it’s a chance to win a new jet ski or car. We hope we grab a lot of donors from both approaches to perks.”

Wong is an accomplished creator, and his new project shows promise. Consider a contribution if you’re a fan of his, and who knows–you could win a new set of wheels in the process.