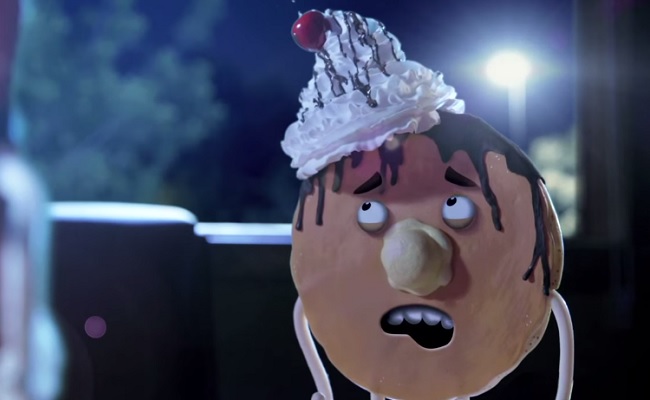 While web series cover a wide range of topics, it’s unusual to see one pop up that features breakfast foods as the characters (and not just the subjects). That’s exactly what Denny’s and Stoopid Buddy Stoodios have served up to the online video masses in their new web series The Grand Slams.

The animated web series is based on the restaurant chain’s popular Grand Slam dish, and it introduces viewers to four different breakfast foods slash characters: Egg, Pancake, Sausage, and Bacon. Together, these four morning-meal favorites go on delicious adventures both inside and out of the restaurant. The debut episode finds Bacon and Sausage refusing to let whipped-cream-and-chocolate-covered Pancake into the hot new breakfast bar in town because “there’s no dessert with breakfast.”

The Grand Slams is Denny’s latest attempt to snag the attention of Millennials. The restaurant chain’s previous web series, Always Open, which featured A-list celebrities like Jason Bateman and Sarah Silverman, was the catalyst for an increased impression score and restaurant awareness among 18 to 34-year-olds.

“As we continue to grow as a brand and engage with our millennial audience both on-and-offline, it is important we extend conversations beyond our diner walls and into the social world where they live and breathe,” said John Dillon, vice president of marketing for Denny’s, in a release. “Stoopid Buddy Stoodios has helped us to create this unique series that brings our brand to life in a fun, fresh way, which will allow us to connect in a manner that’s relevant, and on their terms.”

Denny’s made a smart decision to partner with Stoopid Buddy, whose stop-motion series like Robot Chicken and WWE Slam City are popular with millenials (plus, the studio just launched an online animation course via Vimeo). “We’re incredibly excited to collaborate with Denny’s,” said John Harvatine IV and Eric Towner of Stoopid Buddy Stoodios, in the release. “We really enjoy it when we have the opportunity to create content that’s a little unexpected and ‘The Grand Slams’ brings breakfast to life in a way that’s never been done before.”

You can catch new episodes of The Grand Slams as they’re released on Denny’s YouTube channel or on the diner’s mobile app. Alternatively, if you happen to eat in one of the restaurants, you can scan the QR code on the placemat and enjoy a digital version of breakfast as you eat the real thing.