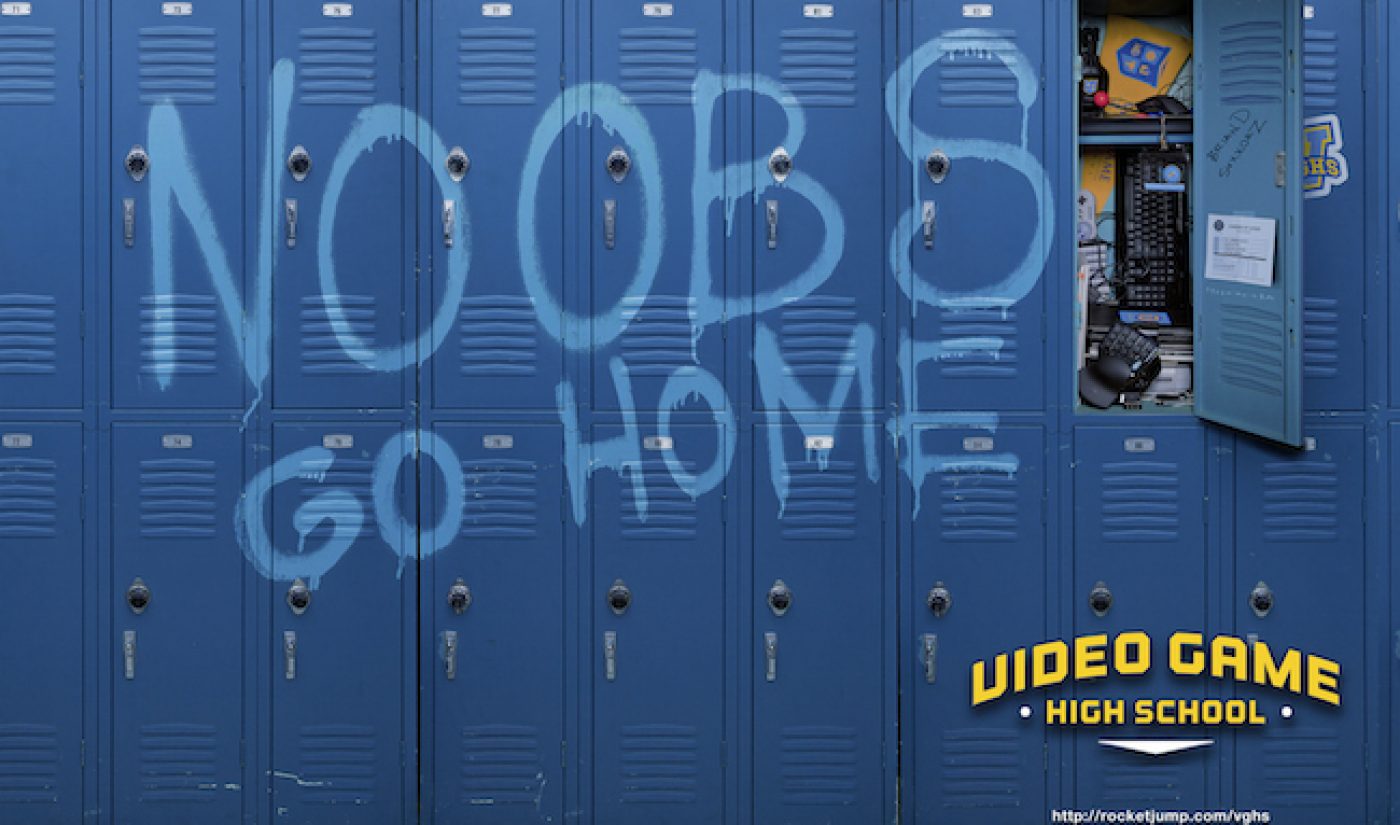 For the first time in more than a year, a new episode of Video Game High School is available. Freddie Wong and Matt Arnold‘s action-packed web series, which is co-produced by Rocket Jump and Collective Digital Studio, has begun its third season across Rocket Jump’s online video channels. For extra-eager fans, the entire series can be downloaded from the Rocket Jump website for $14.99.

The third season returns to protagonist Brian D and his band of gamer friends, who continue to take on a cadre of villains both in the virtual world and in the hallways of the titular high school. Season three was funded by a record-breaking Indiegogo campaign and is VGHS‘ biggest season yet, so we sat down for an interview with  Wong one day before the show’s premiere at New York Comic Con. Here’s what he had to say about his latest creation:

Tubefilter: What is going to be the major theme of season three?

Freddie Wong: We put every character through the ringer here. Every character is going to get through their highest highs and their lowest lows at any point throughout all three seasons. Thematically, i think we’re hitting a lot of the points that happen later on in high school, so we talk about things like death. We’re killing off a character. And we’re talking about things, not explicitly, but we enter the world of teen drinking, and sex, and the stuff that you start to experience near the end of high school.

From an action movie geek standpoint, expect more of everything in terms of explosions and effects and fight choreography. We do [three] gigantic one-take action sequences…and from the character standpoint this is the most interesting season, the most propulsive season of the three.

TF: How long are the one-take action sequences?

FW: We have two in the last episode, both of which are about a minute-and-a-half long. Just long, crazy cool action sequences. It’s some of the most exciting stuff that we’ve ever shot, in terms of choreography, so we’re excited for that.

TF: So it’s really like the third movie of the trilogy?

FW: It essentially is. It’s wrapping up all the stories, it’s bringing all the conflicts and everything we’ve set up to a head, and hopefully wrapping it up in a satisfying way for fans of the show. Do you think this is the best season?

FW [with no hesitation]: Absolutely. I think it’s far and away the best season in every level and every aspect you can measure by…I think it’s the one were most excited about coming out with, just to be able to see and hear people’s responses to it, especially because everything is going to be available at once. We’re putting out one episode at a time on Mondays, but we’re also making all six episodes for digital download from the first day forward, so we’ll finally be able to get everyone’s reactions all at once. It will be a fun day of reading comments.

TF: What new game modes are coming in this season?

FW: In episode five we get a hint of what an edutainment game looks like in the future, and it’s nothing like what you expect when I say edutainment.

FW: It’s incredibly ridiculous, and I think everyone is going to be surprised by it. Everyone’s going to get their hopes up, and then we’re going to drop this educational joke on them that will hopefully work.

TF: What sort of cameos can we expect this season?

FW: We have a lot of cameos…we’re very fortunate to be able to have people interested in the show. It’s kind of cool to be able to put some of those people in the show. The big one this season is Nathan Kress as one of the villains. That was all because he’s a fan of the show, and he was on Twitter, and we talked to him on Twitter and made it work.

TF: What would you say is the breakdown of the cameos in terms of traditional media stars vs. new media stars?

TF: How has YouTube assisted the production, distribution, and promotion of VGHS this season?

FW: There’s a lot of posters going around. We were part of the beacon campaign this time around so that’s definitely a big help in the major metropolitan areas. We have, for the first time, a traditional ad side to this beyond the “put this up on our YouTube channel and hope people see it” side, which is how we’ve always operated. We’re shooting at [YouTube Space LA] again this season to represent parts of the interior of the school. Less of the story takes place in those hallways, but it’s funny because I think people may associate the space as Video Game High School more so than anything else. I hope not, for Google’s sake…As a platform, they’ve done quite a bit in terms of being a place that we can see the show for free, and it can’t be understated this time. FW: The funding’s all from Indiegogo or private investments. [Editor’s Note: Those private investments include cash kicked in by Collective Digital Studio, the  YouTube MCN with which Freddie and RocketJump are partnered.] They’re talking about doing some financing stuff for later…I’ve heard whispers that’s kind of a direction they’re looking at, which is “Hey, here’s content, how do we get content, well, I guess we have to pay for it.”

Video Game High School is very much a show that has been supported by existing means. Now, to get kind of nerdy about it, all three seasons represent sellable TV final products for international distribution.

TF: Is that squarely in your mind?

FW: Yeah, I don’t really see a problem with that, especially when you’re talking about international. People prefer to watch in so many different contexts that it behooves you to be on as many of those contexts as possible. Mobile, app, every aspect of that, you don’t want to leave anybody out in the dust. If they want to see it, they should be able to see it.

TF: What sort of budget are we looking at this season?

TF: And that’s a lot larger than last season?

FW: Last season was $1.4 million, so we’re talking about 50% more. We are also talking about an additional hour of footage, so proportionally it’s less of a jump than you might think, because you’re also getting more time and more content out of it.

TF: What has that extra budget allowed you to do?

FW: A lot more in terms of the action side of things, the production design, the CG work. One of the things we do is a full-on CG troll fight this season, which is a very weird and a very difficult thing to film…PlayFight, our effects company, pulled that off. We’re also licensing some music, so there will be some tracks people will recognize that we’re also very excited about.

TF: So this is definitely it for Video Game High School?

FW: We may do an animated series. That’s the next step.

TF: Would it be a separate story?

FW: Yeah, we’re very much fans of the way that Superman doesn’t have to be the same Superman across every single piece of media. I think it will be Video Game High School, it will be the same basic conceit, but a whole new set of friends and a whole new game type.

TF: What are you hoping to see as the reaction? How important is it to you for fans to also see this as the best season of Video Game High School?

FW: For me, it’s less about the taste side of it. People are going to prefer whatever season they prefer. I know people who still prefer season one over season two, even though I would say, “No, you’re crazy, season two was way better.” The reaction we’re hoping for is a reaction in line with changing the way people perceive web series. When you talk about a YouTube show, it doesn’t have the same level of prestige…What we want people to take away from it is “This is what web series can be. My previous definition of what I assume a web series is is no longer valid.”

FW: We’re gonna do more seasons, we’re gonna do feature films, we have the deal in place with Lionsgate. We have a show called Dimension 404 that’s a 22-minute anthology, like The Twilight Zone, but for the modern digital age. That one’s a lot of fun, and there’s a lot of good scripts in there. We’re looking to launch that sometime next year.

TF: Is there anything else you think the public should know about season three?

FW: It’s the last season, and I think it’s the best season. Period.