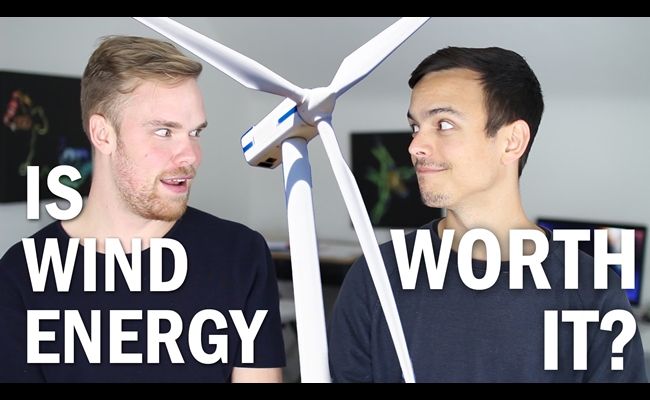 As it turns out, General Electric‘s YouTube presence is not limited to silly ads starring Jeff Goldblum. The multinational corporation has teamed up with some Fullscreen partners to show off its latest engineering developments. Most recently, it promoted its innovations in wind power with some help from Mitchell Moffit and Gregory Brown of ASAPScience.

ASAPScience’s partnership with GE began with an episode about human energy consumption. In their typical fast-paced manner, Mitch and Greg spouted off a number of facts about the 15 terawatts of energy we use each day (that’s 15,000,000,000,000 watts.)

By the end of the video, Mitch and Greg arrive on wind power, and they invite viewers to click on an annotation that leads to a separate video set at the GE Global Research Center in Munich. In that video, Mitch and Greg explore GE’s recent breakthroughs in wind power and ask the question “Is Wind Power Worth It?” In case you’re not sure where ASAPScience stands, they noted in a Google+ post that they are “big fans.”

This is the second part of GE’s collaboration with Fullscreen talent. Previously, Marquese Scott choreographed one of his signature dances to the mechanical sounds of GE’s Aviation Testing Facility in Ohio.

GE has become a very savvy brand when it comes to online video. In addition to these partnerships, it previously joined forces with The Slow Mo Guys, launched a contest on Tongal, and made Vine videos before most other brands realized the power of the platform. GE understands its place in the online video world: So long as it continues to develop interesting science innovations, it will find an audience for them online. Also, Jeff Goldblum.